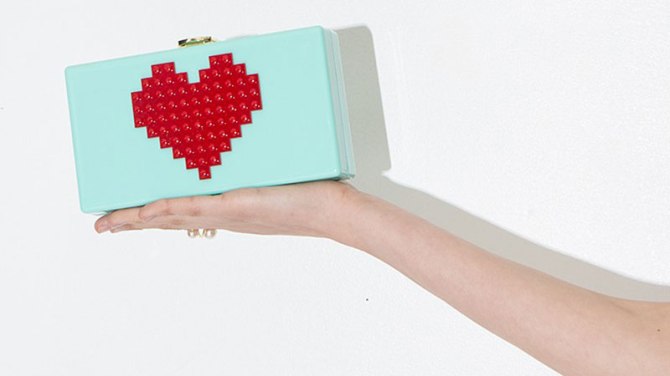 During February’s round of Fashion Week shows, we noticed one clear-cut trend cropping up on the arms of editors and influencers: Lego-style totes and clutches.

Originally, the fad was sparked by luxe accessories brand Les Petits Joueurs, which managed to fuse chic leather top-handle bags with quirky, humorous icons and phrases. The bags are statement-making, to say the least, but the attention comes with a nearly $1,000 catch. A Les Petits Joueurs tote will set you back about $895, which isn’t exactly palatable for most for us.

This is how the street style crowd at fashion week do Valentine's Day.

Since first covering the luxury brand back in February, we’ve noticed a number of high-street retailers have caught on to the label’s growing popularity and are riffing on the trend with way more affordable options.

To wit: Pixie Market’s $55 clutch featuring a lego heart print that looks suspiciously similar to the high end styles we saw at Fashion Week. However, even if you usually cry copycat at the sight of designer ripoffs, you’ve got to admit that the woman who spends $55 on a statement bag is a very different shopper to the woman who spends $895 on a loud design. We’re going to let this one slide and simply enjoy the budget-friendly option.