It’s been three years since the end of “Glee,” but Lea Michele still hears comparisons to Rachel Berry, the high-strung, full-hearted high-school glee club leader she played for six seasons. Mainly, people wonder how much of Michele’s real-life high-school experience was similar to Rachel’s, which often included her being bullied, backstabbed, and having the occasional slushie thrown in her face. “After playing Rachel Berry, people assume that I had sort of this similar experience in high school,” Michele tells StyleCaster. “But I really had a positive experience, thank God. I know that that’s not the case for a lot of kids.”

But that doesn’t mean that her teen years were easy. When she was 15 years old and embarking on her Broadway career, Michele was told by her manager to get a nose job, a procedure that almost every girl at her high school had undergone. “That was the first time I put my foot down,” Michele says. “That’s maybe the choice for someone else, but it was never the choice for me. If I’m going to do something, it’s because I want to and not because someone tells me that I should do it.” 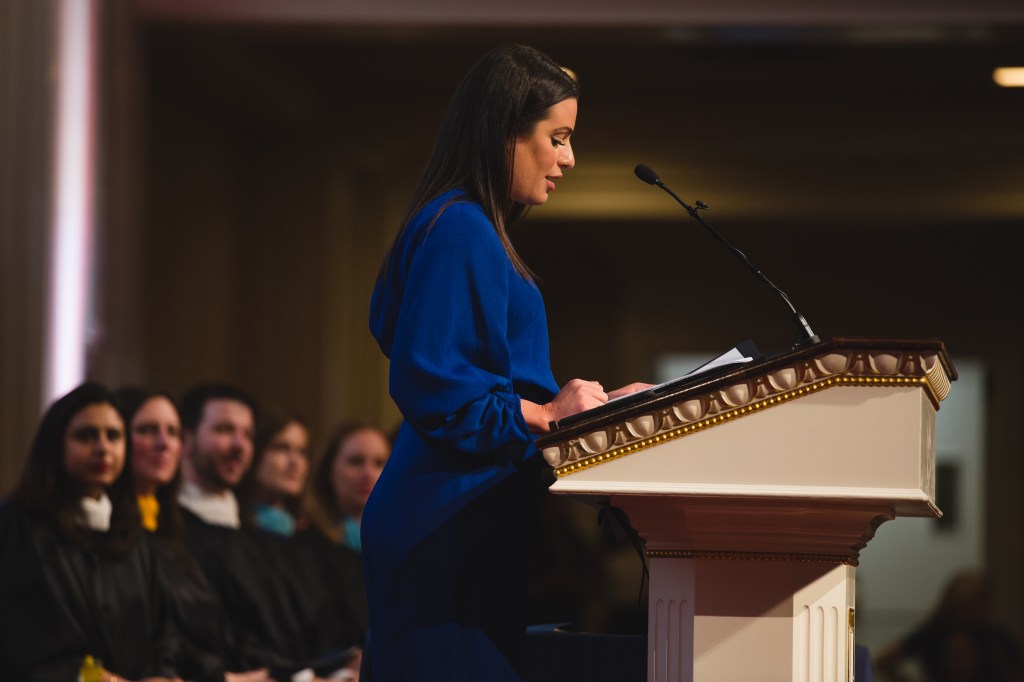 MORE: How Drew Barrymore Deals with Instagram Trolls and Self-Doubt

Michele, who went on to fire her manager (“I think that lady was probably crazy”) and kept her nose as is, credits her confidence as a teen to her parents, who always encouraged her to embrace her natural beauty. Michele’s bond with her parents is likely why she partnered with Whirlpool’s “Congrats, Parents” campaign, which celebrates the parents who raised this year’s 3.6 million high-school graduates. “My parents instilled a lot of confidence in me to love my natural beauty and accept myself truly for who I am,” says Michele hours before delivering the commencement speech at Uplift Peak Preparatory in Dallas. “It really seeped in.”

If I’m going to do something, it’s because I want to and not because someone tells me that I should do it.

And though she always felt comfortable in her skin, Michele was aware of how other people viewed her, which is why before “Glee,” she never dared to dream of seeing herself on television, on magazine covers, or as the face of beauty campaigns. That all changed when she became a star and spearhead for unique beauties on screen. “I remember years ago, when ‘Glee’ first aired, there weren’t a lot of people who looked like me on television, “Michele says. ”There was still this really conformed structure for what beauty is. So I would try to tell my story and show everyone that I never thought that I would be on the cover of these magazines and in beauty commercials. But I stuck with what I believed who I was and that’s what worked for me, so I’ve always tried to instill that in my fans.”

Since her time on “Glee,” Michele has seen the landscape of television change dramatically. Though she believes that there is still a lot of progress to be made, she’s happy that more and more shows are casting actresses of diverse looks, shapes, and sizes, and teaching viewers that there is no one definition of beauty.

“The good news is—though we still have a long way to go—I do believe, even in the years since ‘Glee’ first aired, that there really has been a big shift on television,” Michele says. “Women of different shapes and sizes are being represented. We’ve really seen how many other women who have embraced their uniqueness catapult to success. Now, luckily, this generation is seeing that and embracing who they are.”

I never thought that I would be on the cover of these magazines and in beauty commercials.

In the vein of natural beauty, Michele also isn’t here for Photoshop. She reasons that if people are going to see paparazzi photos of her—flaws, bad angles, and all—there’s no reason for her edit herself. “When I leave my house every single day, and if there’s a paparazzi photo of me, that’s me with no makeup on. They don’t retouch it,” Michele says. “People see me for what I really look like. If I cared about what I look like that much, I would leave the house with a full face of makeup, but I don’t.”

And while she has been photoshopped before, such as when magazines retouch her nose, Michele admits that those moments are rare. “People hire me for who I am. It defeats the purpose to change what I look like,” Michele says.

If I cared about what I look like that much, I would leave the house with a full face of makeup, but I don’t.

Though she didn’t always realize it, Michele’s uniqueness has become her best advantage in Hollywood. It’s what earned her her role on “Glee” and partnerships with numerous beauty brands. For Michele, what you see is what you get—something she takes extreme pride in.

“I have a lot of young fans and a lot of girls who look up to me because I never did change my appearance based on what other people thought was beautiful or the typical standard of beauty,” Michele says. “It was my uniqueness that got me that job on ‘Glee’ and that has gotten me to where I am today. I always try to remind the younger generation that you should embrace truly who you are because that’s going to be your true key to success.”