Since her star-making turn at the 2016 Summer Olympics, Laurie Hernandez has been nicknamed “the human emoji.” And she lives up to her title. Not only is she effervescent and bubbly, woot-wooting at the mention of Gen Z and cracking herself up at her method of dealing with haters (“I block ’em!”), Hernandez, 18, is all about positivity, whether it’s body image, diversity, or the future of our country.

“I definitely take into consideration that I have a platform. It feels like an honorable responsibility,” Hernandez tells StyleCaster at the launch of Alcon Dailies Aqua Comfort Plus Contact Lenses. (Fun fact: Hernandez landed a new move on the uneven bars the first time she wore the lenses.) “There are little kids who are using social media and the hope is if they find my account, they find something good and be inspired by whatever they see.” 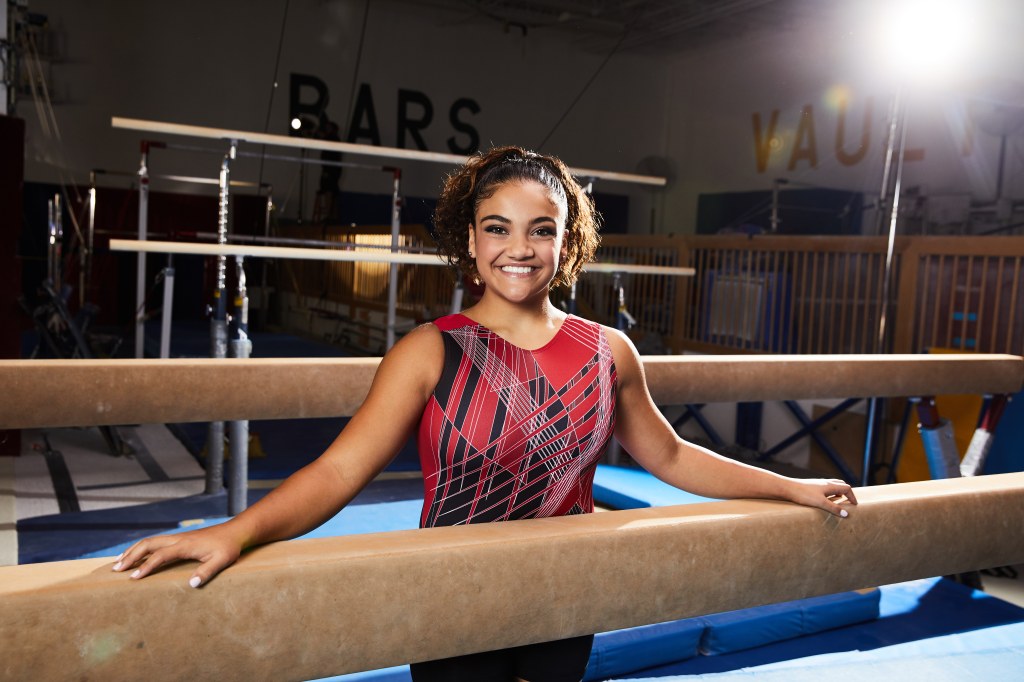 Though she’s a proud social activist, Hernandez admits that she didn’t think about diversity growing up. As someone who watched gymnasts such as Shawn Johnson and Nastia Liukin, before entering the sport herself, Hernandez was concentrated on one goal: going to the Olympics. It wasn’t until 2016’s Summer Olympics in Rio de Janeiro, where she won gold and silver medals, that Hernandez, a Puerto-Rican-American, understood her impact as the first Latina gymnast to compete for the United States in more than 30 years, an accomplishment that she says is “long overdue.”

“I had a lot of families, mostly Hispanic families, coming up to me and saying, ‘You know, my daughter didn’t think she could do gymnastics and was going to pursue a different sport, but when she saw you out there, it inspired her to try something new, and we thank you,’” Hernandez says. “That was a crazy moment for me. That was inspiring for me to hear.”

As a gymnast, we strive for perfection.

However, Hernandez’s gymnastics journey wasn’t without challenges. Like gymnasts, she entered the sport because she loved it, not realizing the amount of hair and makeup that went into competing. “Growing up, you start off doing gymnastics, and you realize how much goes into your hair before a competition and how much makeup you start to put on and how much you focus on how you look because you want everything to be perfect,” Hernandez says.

The emphasis on her appearance led Hernandez to believe from an early age that to become a gymnast she had to be “perfect.” What started as attentiveness to her leotard and glam evolved into concern with her body, especially when she was developing during puberty and not training as much in her off-seasons. “As a gymnast, we strive for perfection. We want our leotards to be perfect. Our routine. Our hair. Our makeup,” Hernandez says. “But we also want to look perfect when our body changes, whether that be puberty or your off-meet season or if you’re injured.”

That obsession with perfection eventually led Hernandez to insecurities with her body, especially when it came to shopping and struggling to find clothes that fit her muscular figure. She recalls several experiences growing up where she had a hard time fitting into jeans as the reason she recently launched her body-positive clothing line, Obsess, with JC Penney, to encourage her young fans to embrace their bodies at whatever state they’re in.

Change is going to happen, and it needs to happen.

“At some point I was so muscular, and jeans would fit really weird. Naturally, as an athlete, you’re wearing sweats a lot because you’re warming up, so when you’re wearing clothes that suit you, it’s a weird shopping experience,” Hernandez says. “But honestly, being able to be a gymnast and do the sport that I love, I’m so grateful, and I learned that an incredible body comes with that.

Though Hernandez has learned to be comfortable in her skin, that doesn’t mean that she’s immune to internet hate. When she first entered the public eye, Hernandez was “hurt” by the negative comments she would receive on social media. After realizing that her haters were usually “battling something with themselves” than with her, she was able to tune them out and focus on the positive.

“Cyberbullying is absolutely a thing. I was hurt whenever there were negative comments,” Hernandez says. “But it got to the point where I stopped reading them. If you can’t read them, they can’t affect you. So I was like, ‘I don’t want to read these anymore!’ Also at the same time, for every negative comment, I have a fan base that gives me 1,000 positive comments right after.”

After we hear someone, something needs to change.

However, Hernandez doesn’t want her optimism to be mistaken for complacency. As a gymnast, Hernandez is well aware of the sport’s long history with sexual harassment. In February 2018, Larry Nassar, a doctor for USA Gymnastics, was sentenced to prison after he was accused by more than 265 women, including gymnasts Aly Raisman and McKayla Maroney, of sexual harassment and assault. Though Hernandez has said that she hasn’t experienced any harassment herself, she stands by her teammates who have spoken out and hopes to see effective change.

“I’m hoping to see even more of a shift. I support all of the girls that have been able to come forward with their stories, who have inspired others to come out and be brave,” Hernandez says. “That’s in gymnastics. That’s also outside of gymnastics with the #MeToo movement, so it’s making sure after we hear someone, something needs to change.”

As a proud member of Gen Z, Hernandez acknowledges that the power to change the future lies in younger generations. Still, there are times when she worries that some of the things people are saying about Gen Z (they’re self-absorbed, internet-obsessed, glued to their phones) are true, such as when she recently asked her mom over breakfast if she thought that her generation was “wrong.” “Her eyes got really big, and she was like, ‘No! You guys are going to change so many different things,’” Hernandez says. “I felt inspired because here’s someone very close to me who understands that change is going to happen, and it needs to happen, and we’re going to be able to do it because we acknowledge all of these social issues at such a young age.”

I’m spreading positivity with the hope I could also get it back.

Though Hernandez acknowledges that she’s only one person, she’s doing what she can change to the world and hopefully inspire others to change it too. “As a person, I’m making sure that I’m promoting positivity and promoting change,” Hernandez says. “I’m making sure that I can motivate the younger generation and possibly the older generation and that I’m able to spread that positivity with the hope I could also get it back.”