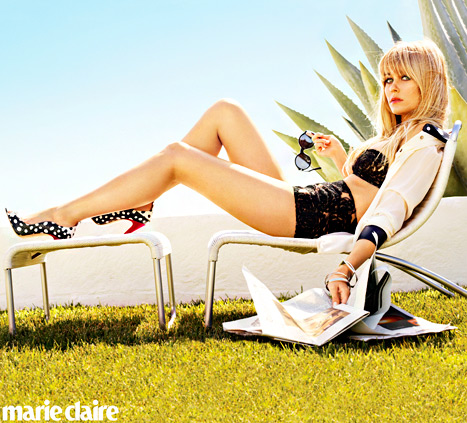 Former MTV reality starlet Lauren Conrad has no doubt achieved immeasurable success after first appearing on “Laguna Beach” back in 2004. The 27-year-old has blossomed into a mini-mogul, with two fashion lines (Paper Crown and LC Lauren Conrad for Kohl’s), a lifestyle website, and a bestselling book series that’s loosely based off her days as an L.A. party girl (the latest juicy offering, Infamous, is out today.)

Now, Conrad is on the cover of the July issue of Marie Claire flaunting new bangs and a toned figure. In the accompanying article, she opens up about a variety of topics, including her boyfriend, former rocker turned lawyer William Tell. After a slew of less-than-perfect loves (we’re looking at you, Jason Wahler), she seems to have finally found her match. “He’s very good for me because we have a lot in common as far as where we grew up,” she says. “It’s the first time I’m with someone and I’m not explaining things. He also has experience in the entertainment industry, so he understands a lot of things that people don’t always get.”

But the most interesting part of the article was by far when Conrad addresses the Hollywood club scene, which she—and her former “The Hills” costars Heidi Montag and Audrina Patridge—were staples for years. “It feels done for me. I’m OK with it being done,” she admitted. “I destroyed my voice when I moved to L.A. There are polyps all over my vocal cords because I was in a lot of loud places. If you listen to the first episode of ‘Laguna,’ my voice is completely different.”

While we were cracking up as we watched Conrad argue with her girlfriends at hotspots like Les Deux, who knew she was actually harming her voice forever?!

Head on over to Marie Claire to read more about Conrad and pick it up on newsstands on June 18!