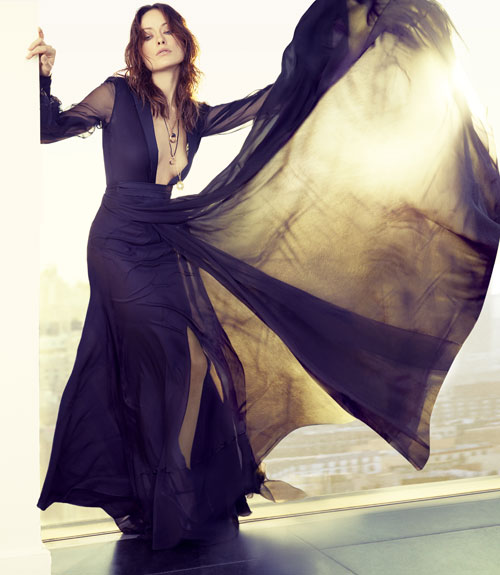 No matter how famous or successful a person may be, it’s a given that insecurities will occasionally surface. Case in point: Olivia Wilde. The actress—often regarded as one of the most beautiful women in Hollywood—admitted to Marie Claire that she was nervous that her fiance, “Saturday Night Live” funnyman Jason Sudeikis, wouldn’t like her because she wasn’t pretty enough.

“I thought, ‘He won’t be interested in me; I’m not a contender,'” she told the mag. “He was so cool, so funny —I was such a fan of his and had always fancied his speed and his intelligence. I thought, ‘I’m not beautiful enough or his type.'”

Sudeikis happens to be perfectly handsome, sure, but in what world are Wilde’s exotic looks not beautiful enough for him? Her quote has been circulating on the Internet, and the general consensus seems to be that—strictly based on looks— he’s lucky to have her.

Wilde also states that they began dating soon after her divorce from filmmaker (and Italian prince) Tao Ruspoli, so she was feeling particularly vulnerable at the time.

While it’s refreshing to hear stars admit they get insecure, we can’t help but wonder whether these types of comments from Hollywood heavyweights—and there have been quite a few lately—could be destructive to their fans.

Last December, Jennifer Lawrence made headlines for stating that she’s considered “obese” in Hollywood, and back in 2010, Anne Hathaway bluntly stated, “I’m not very pretty.”

We understand that these actresses are trying to align themselves with “normal woman” traits like humbleness and modesty, but the fact remains: They’re not normal women. They’re rich, famous, and powerful Hollywood stars who have access to things like trainers, stylists, personal chefs and vacations—and we’re totally okay with that! We just wish they’d let up a bit on the self-effacting comments, because when they say they’re not pretty enough, it’s a given that “average” folks might start to do the same.

Do you appreciate when actresses make self-effacing comments, or are they destructive? Let us know in the comments section below!

More: To Discuss: How ‘Normal” Can Jennifer Lawrence Really Be?