When it comes to celebrities teaming up with brands, things like clothing collections and beauty collabs are (while exciting!) pretty typical. But when one of our favorite pop stars teams up with a beloved childhood snack brand? Now that’s something to sing about! Case in point: the truly outrageous Lady Gaga Oreos that were just announced. Praise Mother Monster, I’m grabbing a cold glass of (almond) milk to celebrate this gift!

As expected, a Gaga-themed Oreo isn’t your normal, run-of-the-mill cookie. It was obvious the sometimes-eccentric star would go all out with aesthetics, as a cookie representing her has to be just as funky and fashionable as she is! In fact, these Oreos might be the most gorgeous little cookies I’ve ever seen in my life: they’re golden pink, stuffed with neon green creme and have hearts and Chromatica-inspired designs embossed on them.

In an Instagram post, Lady Gaga was seen laying in bed as she opened up a package of the precious pink Oreos. (Eating cookies in bed? Stars, they’re just like us!) Her adorable French Bulldog pup, Koji, curiously sniffed the electric pink packaging as Gaga shares more information on the collab. “We decided it was a good idea to have a Chromatica Oreo, which is a pink cookie with green filling, Koji!” (We’re guessing Gaga didn’t share any Oreos with Koji to be safe. Poor pup, such FOMO!)

According to People, the release date for a full-size pack of the Chromatica Oreos (like the ones in Gaga’s Instagram video) has not yet been released, but Little Monsters will be able to pick up a six-pack of these incredibly fashionable cookies starting in January, which feels SO far away. In the meantime, fans can sign up for the Lady Gaga x OREO Stan Club in order to get notified when the collab drops. (The first 1,000 people who signed up were lucky enough to snag a complimentary cookie pack.)

“This collab is inspired by the world of Chromatica, where kindness rules all things,” Gaga said in a statement. “I love these pink cookies with green creme, and hope they brighten your day as much as they do mine!” The singer and Oreo are also launching an initiative on December 15 called Sing It With Oreo, which allows fans to send “OREOgrams” to friends and loved ones for the opportunity to win a flyaway concert experience, meet Lady Gaga (depending on COVID restrictions), receive a personalized OREOgram from Lady Gaga and score some swag. The gift that is Gaga keeps on giving! 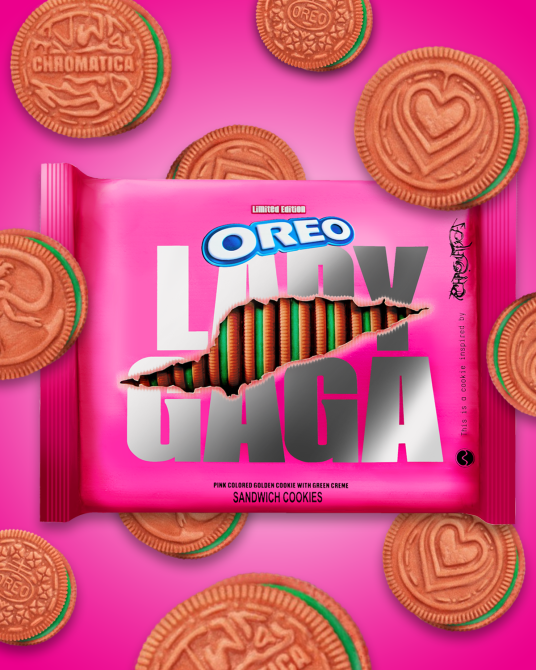 Now, it’s safe to say that the Lady Gaga Oreos are going to sell out faster than you can say “Rain on Me.” Don’t be surprised if people start flipping them on eBay like the Supreme x Oreo collab—those went for over $80K! Unreal. And if you do get your hands on them, tell me: Would you actually want to eat them? They’re so pretty! I’d probably shellac them into a pair of earrings so I could enjoy them forever.