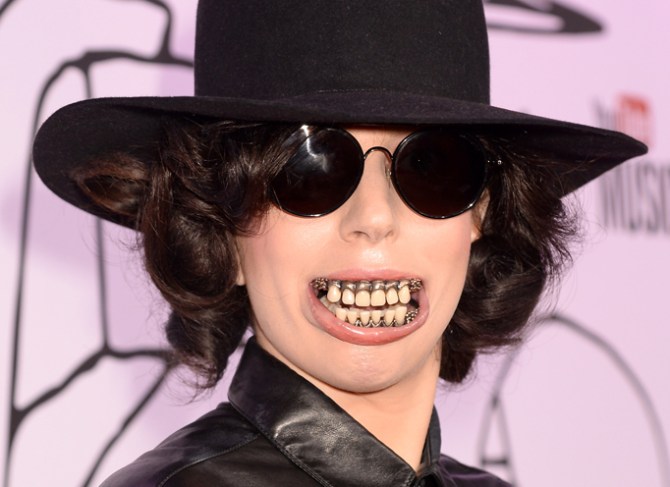 Lady Gaga‘s new album, “ArtPop,” doesn’t officially launch until next week, but the star has been on a promotional sprint for months, starting with a naked performance art video, created in collaboration with renowned performance artist Marina Abromavic, in early August. After months of pared-down “artist chic” outfits and appearances, Gaga went back to avant garde ways on a grand European tour — wearing sheer dresses, drawn-on mustaches, and a giant bird-like costume.

Her latest foray into statement dressing appears to be a bizarre take a grill: Gaga turned up at YouTube’s first Video Music Awards over the weekend sporting some seriously disturbing-looking fake teeth.

Her outfit itself was surprisingly frills-free — a leather shirt dress, sunglasses, and a hat — so the effect of her monstrous, dentures-baring grin was pretty jarring (as was the fact she subtly resembled Michael Jackson.) Gaga often employs a “shock and awe” strategy when it comes to the red carpet, and her outfits of late have certainly looked to push boundaries, from completely sheer white dresses to straight-up black bras worn as tops in public. As wardrobe stunts go, we have to say, this one certainly got a reaction from us.

She took the dentures out when it came time to perform, hitting the stage to debut her new song, “Dope,” wearing a trucker hat, plaid shirt, and a mousy-brown wig. With all these wardrobe changes, it’s getting a little tough to suss out a theme — is it art? Is it just shock value? You be the judge.