What’s more mysterious than Lady Gaga? Lady Gaga’s dating history. Since her breakout year in 2008 (when her single “Just Dance” was the most played song in every club in America), Lady Gaga has been a bit of an enigma—hence the title of her Las Vegas residency show.

But just because Lady Gaga doesn’t talk about her relationships often doesn’t mean she isn’t looking for love. In a 2016 interview with CBS This Morning, the “Stupid Love” singer opened up about why she takes breakups so hard. “I think women love very hard,” she said at the time. “We just love with everything we have. And sometimes I don’t know that that love is met with the type of dignity that we wish it would be met with. You know, we’re not trying to make you less of a man.”

She continued, “We just want you to love us as deeply and as wholesomely and as fully as we love you.”

Ahead, we looked back on Lady Gaga’s most notable relationships, from her ended engagements to her month-long flings. Lady Gaga may be known for songs you can bop to at the club, but when we listen to her lyrics, she’s just as much of a romantic as any other singer-songwriter. Read up on her relationship history.

Don’t worry if you don’t know who Dada is. Dada and Gaga met when he started as a creative director for Haus of Gaga in 2008. The two dated for a hot second before their split (which was around the time the “Bad Romance” singer’s career skyrocketed). After their breakup, Dada continued to work for Gaga until 2010.

In an interview with Evening Standard in October 2010, Gaga revealed that she broke up with Dada after she realized that they were better as business partners than as lovers. “Dada is quite brilliant and we were crazy lovers, but I stopped it when we discovered what a strong creative connection we had,” she said at the time. “I didn’t want it just to be about careless love.” 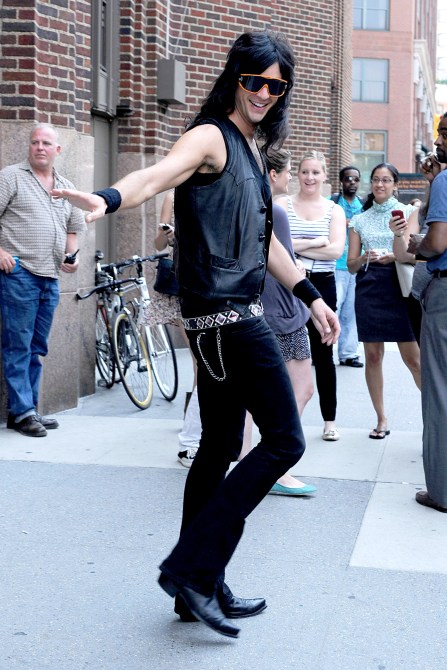 Before her come-up in 2008, Gaga dated Carl, a bar owner and nightclub promoter in New York City, on and off for three years. Though their relationship didn’t last, Gaga told Rolling Stone in 2009 that the romance changed how she views love. The singer also revealed that her 2011 song, “You and I,” was written about her ex.

“[I’ve] really never loved anyone like I loved him. Or like I love him” Gaga said of Carl at the time. “That relationship really shaped me. I sort of resolved that if you can’t have the guy of your dreams, there are other ways to give love.” 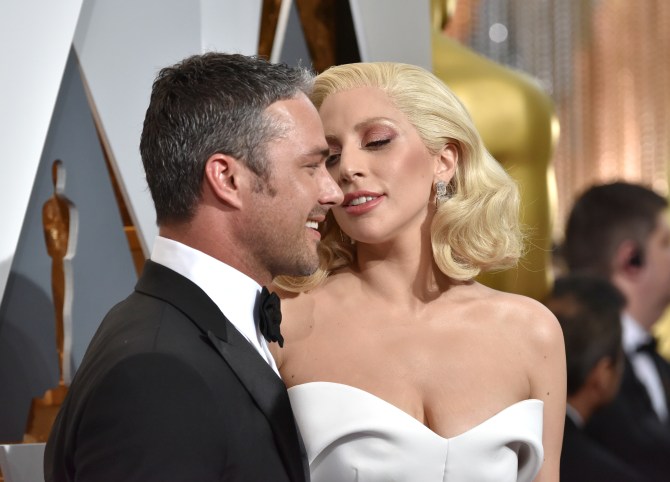 Kinney, an actor on Chicago Fire, is Gaga’s longest relationship in the spotlight. The two met on the set of her “You and I” music video (which was written about her ex) in 2011. Kinney played Gaga’s love interest, and soon their romance became IRL. “We had a good time. I think there was chemistry,” Taylor said of Gaga on Watch What Happens Live in 2011. “I remember it was a late shoot. We were shooting until 4 or 5 in the morning or something like that. We exchanged information. A few weeks went by and we kept in touch, and then that’s that.”

Kinney proposed to Gaga on Valentine’s Day 2015 with a heart-shaped diamond ring. The two made their relationship red carpet official at the Oscars later that year. However, a year after their engagement, Kinney and Gaga called it quits. The “Alejandro” singer announced the breakup in an Instagram post  at the time.

“Taylor and I have always believed we are soulmates. Just like all couples we have ups and downs, and we have been taking a break,” she wrote. “We are both ambitious artists, hoping to work through long-distance and complicated schedules to continue the simple love we have always shared. Please root us on. We’re just like everybody else and we really love each other.”

Despite Gaga claiming that the two were simply “taking a break,” the pop star and the The Vampire Diaries alum never reunited romantically. 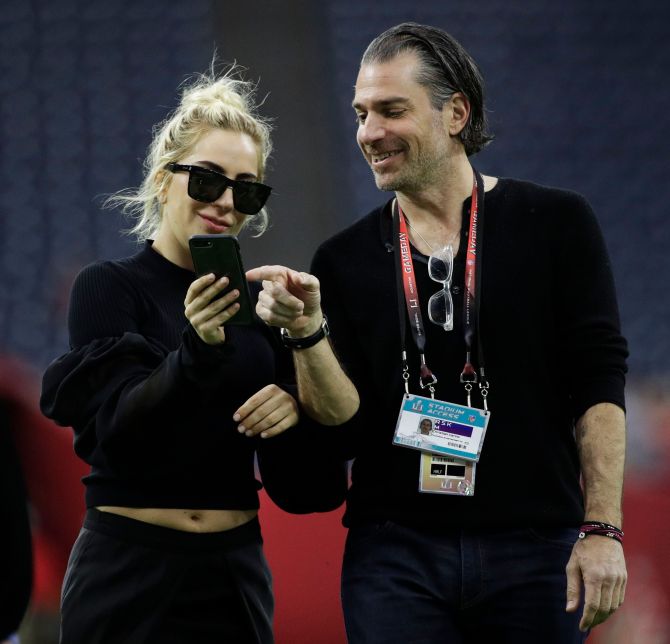 Gaga’s next public relationship came a year after her split with Kinney. In January 2017, Gaga and Carino, a talent agent, were seen at a Kings of Leon concert. A month later, Carino was photographed with Gaga at the 2017 Super Bowl, where she performed the halftime show. Gaga and Carino got engaged in November 2017 (after she showed off her engagement ring on Instagram), but it wasn’t until almost a year later, in October 2018, that the “Bad Romance” singer confirmed the engagement.

However, as most of us know, Carino and Gaga didn’t work out. Before their split in February 2019, Gaga thwarted rumors that she and her A Star Is Born costar, Bradley Cooper, were in a secret relationship. According to some sources, this led to Gaga and Carino’s split before her performance with Cooper at the Oscars that year. “[Carino] didn’t treat Gaga very well toward the end of their relationship,” a source told Us Weekly at the time. “He was jealous. He was trying to find her all the time and texted her a lot. Her friends didn’t like him either.” 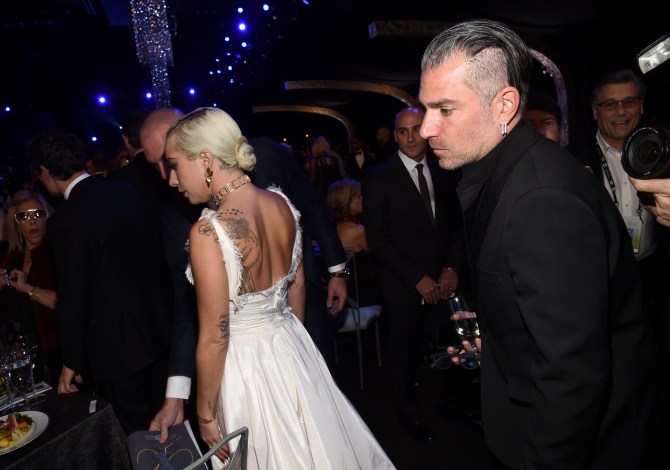 The insider also claimed that Carino “infringed on her creative process,” which led Gaga to call it on their relationship. “[She] couldn’t risk jeopardizing her career in that way, over a man, and that’s not something she would stand for,” the source said.

Horton and Gaga had a short relationship in the summer of 2019. In July 2019, a source told People that the two were seen kissing and seemed to be in a romantic relationship. “They were kissing as they spoke really close up…Ironically, she had a table in the front near the sidewalk, so she was clearly okay with being seen,”the insider said. “She seemed very happy when interacting with the guy she was with.”

However, the relationship didn’t last. In October 2019, Gaga confirmed that she and Horton after she posted a photo with a friend at a Bachelorette party with the caption: “An about to be married woman and me, a single lady.”

A source told Us Weekly at the time that “Dan was not mature enough for her.”

Gaga’s current boyfriend is Michael Polansky, a Harvard graduate and an executive at the Institute for Cancer Immunotherapy and The Parker Foundation. Rumors flew that Gaga had a new boyfriend on New Year’s 2020 when she was seen kissing a mystery man (who was later identified as Polansky.) A source told E! News at the the time that the two had been dating “for a month.” “They’ve been seeing each other since before the holidays and she’s crazy about him…They had already been seeing each other for weeks.”

Since then, Gaga has posted several photos of her and her new beau on Instagram. But that doesn’t mean they’re serious. A source told Us Weekly in February: “They are not serious. She’s having fun and likes the attention, but he is not the only guy she’s interested in. Despite sharing a pic of them on Instagram together, she hasn’t been making a big deal about Michael to her friends.”