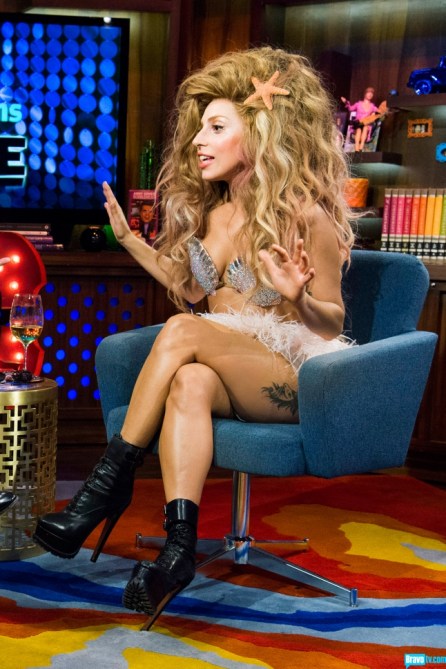 We thought Bravo’s “Watch What Happens Live” peaked when Oprah appeared on the late night talk show, but we were mistaken. Lady Gaga sat opposite host Andy Cohen last night for a truly enlightening interview. Here are some of the things that surprised even us:

1. Lady Gaga appeared on MTV’s “Boiling Points” (as the victim!).
Turns out Gaga was a bit of a diva even before she became famous. Watch her meltdown below.

2. Lady Gaga is buddies with Ralph Fiennes.
While discussing a Russian strip club she’d visited, the singer asked Fiennes, who was sitting in the audience, if he’d been there, too. She went on to say that everything she’s learned was from him. WHAT?!

4. Her skin is perfection.
Maybe it was the insane outfits or huge wigs, but before last night, we were always too distracted to notice how amazing Lady Gaga’s skin really is. It is so damn luminous! We’ll now be investing in gallons of highlighter in hopes of looking as dewy as her.

5. She thinks flip flops are the downfall of relationships.
Gaga said she considers flip flops to be the gateway drug of laziness. As she said, first it’s flip flops, next it’s sweatpants.