If you’re looking for answers about Bradley Cooper and Irina Shayk’s breakup rumors, Lady Gaga doesn’t have them. Sources close to the situation are attempting to diffuse any speculation of Lady Gaga’s involvement in Bradley Cooper and Irina Shayk’s alleged relationship issues, which broke on Wednesday. This isn’t the first time Gaga has been involved in Cooper and Shayk’s relationship rumors. Earlier this year, she shut down rumors of an affair between her and Cooper as soon as they took on a life of their own. And it looks like Team Gaga has gone into damage control mode once again.

Speaking with Us Weekly about Cooper and Shayk’s breakup rumors, sources close to the matter made it clear that Gaga’s hands are clean. In the source’s words, the reasons for the couple’s rocky relationship have “nothing to do with Gaga” and Gaga’s name should be kept out of everyone’s mouths from here on out. A second source speaking to Us Weekly doubled down on this, saying “nothing romantic” ever happened between the A Star Is Born costars, including around the time of their chemistry-filled Oscars performance of “Shallow” in February.

At the time, Gaga addressed the rumors, which quickly sprang up following her performance with Cooper. In an interview with Jimmy Kimmel, Gaga clarified that people must have sensed the chemistry between the two performers — something that became apparent as the pair rehearsed their performance, picking up where they left off on the A Star Is Born set.

“Yeah, people saw love, and guess what? That’s what we wanted you to see,” Gaga told Kimmel. “I mean, this is a love song, ‘Shallow.’ The movie, A Star Is Born, it’s a love story. We worked so hard. We worked all week on that performance.”

She continued, “And from a performance perspective, it was so important to both of us that we were connected the entire time. I mean look, I’ve had my arms wrapped around Tony Bennett for three years touring the world. When you’re singing love songs, that’s what you want people to feel.” 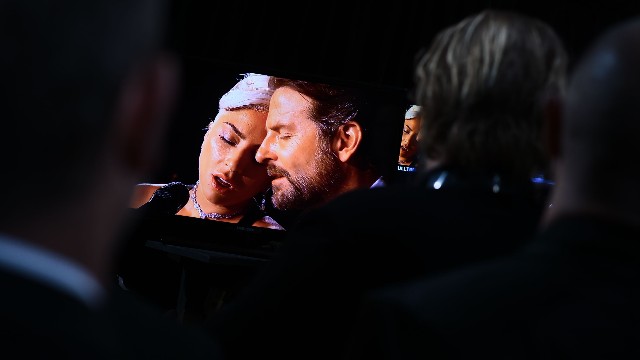 On Wednesday, a source allegedly close enough to the Cooper and Shayk situation spoke with Entertainment Tonight, revealing the couple has been “unhappy in their relationship” for a long time and a breakup was likely to happen.

“Things were difficult before Bradley started filming A Star Is Born but his dedication to his work while making the movie only made things harder at home. The constant speculation about Bradley’s relationship with Gaga —  while things were difficult at home — didn’t help the situation. But his relationship with Gaga is not the issue. They have many daily issues as parents and as professionals and have been fighting,” the source told ET.

The source continued, “Bradley and Irina are trying to work it out, and their friends are still holding out hope, but it doesn’t look good and friends are concerned [the relationship] won’t last.”

Neither Cooper nor Shayk has addressed the split rumors at this time.