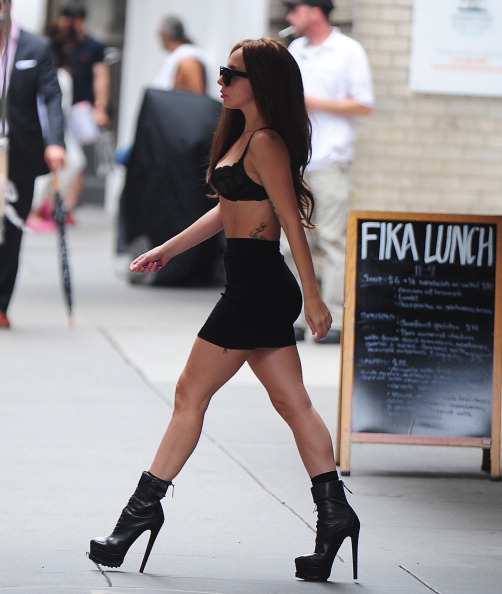 Maybe she’s trying to draw attention to herself because she’s just announced details about her new album ARTPOP, but it seems Lady Gaga thought it wise to roam around the streets of New York wearing nothing but a black bra and mini-skirt yesterday. Like, a legit bra with what appears to lacy scalloped edges.

Yes, we’re aware that tops resembling bras are all the rage among a certain set right now, but most of those are fashioned in the style a longline bra—those that come down to around your ribcage and feature lightly-molded underwire cups—not an everyday Victoria’s Secret bra that we wear under a blouse and would never dream of showcasing on city streets.

MORE: Everything About Lingerie: From Buying Tips to Proper Care

What’s that, you say? It’s warm out? True, New York has been an nexus of heat and humidity lately, but we’re assuming if one’s so hot that they simply can’t bear to put a shirt on, they wouldn’t slap on a pair of black boots with a rough-and-tumble platform, a six-inch stiletto heel and what appeats to be a pair of black socks.

In the background, we spotted a sign for Fika, a chain of Swedish cafes in the city, so for those of you familiar with New York, Gaga’s roaming around one of three neighborhoods that were packed with people on a Thursday afternoon: Midtown West, the Financial District, or the Flatiron District.

At any rate, Gaga did get us talking so we’re giving her props for that—and for her devil-may-care approach to public dressing.

What do you think of Gaga’s outfit? Would you ever walk around in your bra? Let us know!