The season finale of Keeping Up the Kardashians aired, and it was hella dramatic. In the final episode of the season, Kylie Jenner reacting to Kim Kardashian bullying Jordyn Woods was a lot. Back in Feb 2019, we watched the Jordyn Woods/Tristan Thompson scandal play out for the world to see. Khloé’s baby daddy and kind-of bae, was out here kissing all on Woods– Kylie’s former BFF. Unfortunately, Woods wasn’t completely transparent about what went down and though Thompson was the aggressor–the KarJenners hung 21-year-old Woods out to dry, calling her everything but a child of God and posting shady things on the internet.

Thankfully, though she is still dealing with the fallout, the internet wasn’t about to let Jordyn be bulldozed by women who have also found themselves in compromising positions with other people’s men. Things got so intense that Khloé walked back her tweet accusing Jordyn of breaking up her family.

On the season finale, we finally saw how Kylie, who was caught between her best friend and her sisters, dealt with the entire ordeal. Shortly after the scandal broke, Kim and Khloé’s BFF Malika Haqq whisked KoKo away on a girls trip to get away from it all. However, they were also as shady as possible. They sent their fans to attack Jordyn posting a video singing along to the lyrics of Brandy’s “Who Is She 2 U” in the car. Honestly, it looked pretty pathetic (especially since they didn’t know the words…). 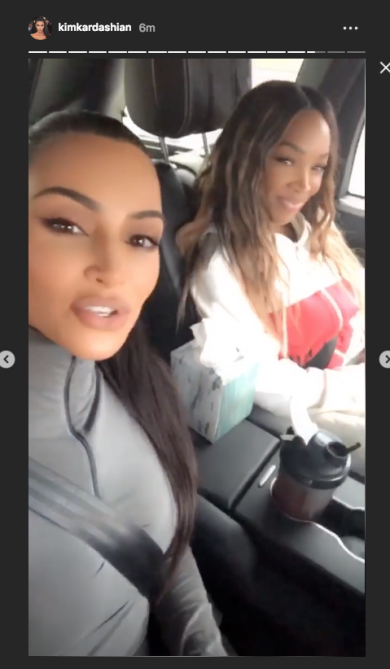 I saw the Snapchats and stuff of you guys singing. I feel like if you wanna call her, yell at her, do whatever you want, or let’s all talk in person, but I just feel like the singing and the internet stuff, it’s just not okay. Jordyn hit me last night, she was just like ‘hey do you mind if I come get some things from the house.’ She got her things, she came in, and just like the look in her eye, like she’s just obviously really going through it. I just don’t think anyone deserves this. Let’s just express everything to each other in person.

We guess Kim took with Kylie said to heart, and she took the videos down. Later, the KKW Beauty mogul even clapped back at her friend Larsa Pippen for adding fuel to the fire. She said, “I wrote Larsa this morning, ‘It’s looking super f*cking lame of you answering questions like this…. It makes it look like everyone around us wants a little extra shine after [Khloé’s] family getting torn apart.”

We suppose if anything, this entire ordeal forced everyone involved to grow the f*ck up just a tad–and that’s not a bad thing.