The KarJenner family might be getting even bigger! The entire fam got together recently for Khloé Kardashian’s birthday, but that’s not the only thing they may have celebrated. Now, fans are pointing to a clue in an Instagram video that Kylie Jenner’s pregnant with her second child. So how did this alleged announcement get out? Sometimes you have to log off of social media, so you don’t accidentally spill the beans.

It’s no secret that Khloé has had a dreadful year. Therefore the KarJenners got together to throw her a lavish 35th birthday with gorgeous flowers, face masks, a massive assortment of donuts and–a mechanical bull–(whew the wealth). Obviously, the Good American designer hopped on her Instagram to show off her special day. However, she left on the volume for her Instagram stories. In the video, you can hear an off-camera voice, that does sound a lot like Kylie saying, “I’m pregnant.” We’ve watched the video a ton of times, however, we can’t confirm that it was actually the Kylie Cosmetics mogul. Also, we can’t really see her making this announcement amid her big sister’s celebration–but crazier things have happened. Check out the video for yourself to see what you think.

It may or may not be Kylie, but fans are also pointed out that in her stories of the soiree, it looked like she might be having a cocktail. However, the drink could have been non-alcoholic. 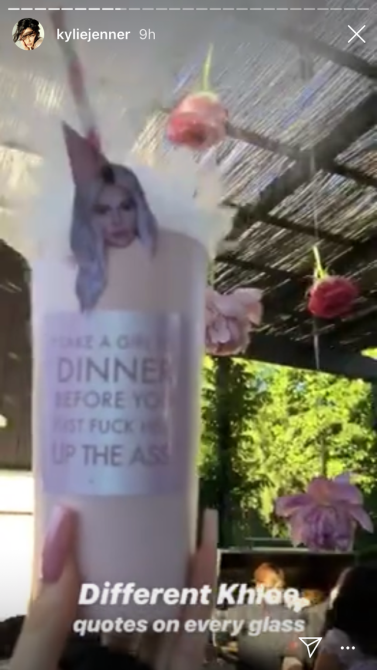 So far, Kylie hasn’t responded to the rumors, but we do know that she and her bae, rapper Travis Scott are looking to expand their family. For the AstroWorld rapper’s birthday in April, she playfully wrote in a caption celebrating him. She said,

Watching you evolve into the partner, friend, son, and father you are today has been so fulfilling ♥️My real life bestie & hubby all wrapped into one. I love you and I’m so so proud of you. Happy happy birthday 🎉🎁 let’s fuck around and have another baby. 🤪

If she is pregnant with Stormi’s sibling, we wonder if she’ll go into hiding again, or if she’ll continue to live her life in front of the camera. Honestly, we think it was iconic that Kylie took some time for herself. But if it’s not Kylie, who on earth is pregnant?