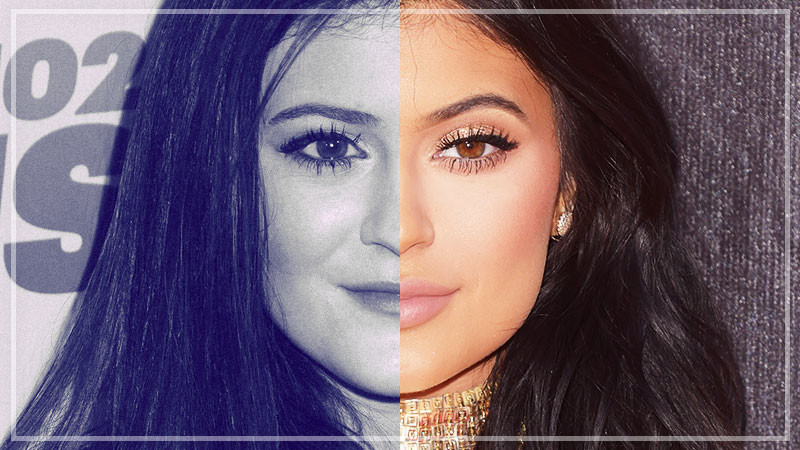 It’s not breaking news that the Kardashian family has no qualms about, um, tweaking their collective visages. We don’t need to launch into a whole song and dance about how Kim, Khloe, Kris Jenner, and—duh—Caitlyn Jenner all look totally different than they did a few years (or in some cases, months) ago, but we’re sticking to our guns and claiming Kylie Jenner‘s transformation takes the cake for a number of reasons, one of which being that it started when she was merely 16 years old.

A quick reminder: Word first started to spread that Kylie’s lips were looking a little different back in March 2014 after what her reps called a “trampoline accident” kept her off of the red carpet and out of the spotlight. But when she reemerged a month later, a noticeable transformation got the rumor mill swirling that her “accident” was actually plastic surgery. At the time, OK! Australia spoke to experts who claimed Kylie got Botox, lip plumpers, and a nose job, which her reps categorically denied.

But then the Instagram photos starting coming, proving to the world that a specific body part enhanced to unnatural proportions coupled with a deliberately oversexed-looking photo feed can indeed make you very, very famous. (See: Internet-breaking half-sister Kim.)

We’ve already outlined many (many) details of reality star’s ever-changing face and body, so—in honor of her 18th birthday—we’ve illustrated it for you. Check it out below, and join us in wishing Kylie Jenner a very happy (and Birkin bag-filled) year!

All photos: Instagram/@KylieJenner and WENN