Ever since announcing the birth of her second child, fans have been curious to know Kylie Jenner’s baby name. So, what is the newest addition to the KarJenner family called?

While Kylie Jenner’s baby name was a mystery when she first announced the exciting news, her friends and family members seemed to hint at her baby’s name. The mother of two also appeared to confirm her baby’s gender. “2/2/22,” she captioned a black-and-white snapshot of herself cradling her baby’s wrist, along with a blue heart emoji, seemingly revealing that she gave birth to a baby boy after months of fan speculation. Following the Keeping Up With the Kardashians alum’s announcement, a rep confirmed to People that Kylie did, in fact, welcome a son with her partner, Travis Scott. The pair also share a daughter, Stormi Webster, who turned 4 years old just one day before her baby brother was born.

The Kylie Cosmetics founder revealed in September 2021 that she was expecting her second child with Scott in a 90-second Instagram video. As soon as news of Kylie’s pregnancy broke, fans quickly began to come up with their theories as to whether the entrepreneur was expecting a boy or a girl—and what their name might be. Now that we know Kylie’s baby’s gender, there’s only one more question to answer. Keep on reading below for everything we know about Kylie Jenner’s baby name.

What is Kylie Jenner’s baby named? 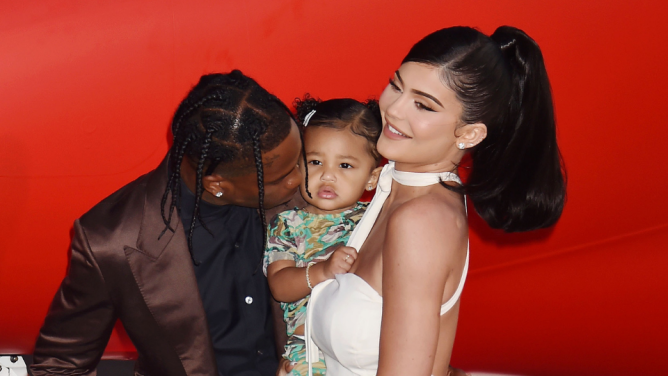 What’s Kylie Jenner’s baby’s name? Kylie finally put the name game to rest. On January 22, 2023, Kylie went on Instagram to confirm her baby’s name. “AIRE 🤍,” she captioned the post. The name reportedly means, “Lion of God.” Kris Jenner wrote in a comment, “I love you Aire Webster.” The name isn’t complicated either and the makeup mogul clarified the pronunciation. When asked  “Do you think it’s pronounced air or airey?” Kylie replied in the comments, “AIR” with a red heart emoji. However, fans on social media were freaking out about its double meaning. “Umm should someone tell Kylie Jenner she renamed her son Aire which is a common Arabic expression for ‘my penis’ or nah?” Antoinette Lattouf tweeted.

Kylie has actually reacted to some of social media’s mockery. In a TikTok, @simo_ziqubu played both the Kardashians star and the rapper as they debated name options, with audio from the opening scene of the animated series Avatar: The Last Airbender and a narration of the four elements: Water, Earth, Fire and Air. The fake Travis shakes his head until she lands on Air—to which he jumps up in response. In the comments, Kylie offered up two laugh-crying emojis, suggesting that she was entertained, not offended.

Fans went wild with speculation over the season two premiere of The Kardashians. “Do you want to see someone?” Khloé Kardashian asked in Thursday’s episode. True replied excitedly, “Yeah.” When the reality star asked who True wanted to see, she answered, “Baby brother. Hi, Snowy!” It’s led to everyone speculating that Kylie’s son is named Snowy, but Khloé corrected her saying that wasn’t the baby’s name.

Just over a week after Kylie Jenner gave birth to her son, the Kylie Beauty mogul took to social media to announce her baby boy’s name was Wolf Webster. Kylie shared the news in an Instagram Story on February 11, 2021, writing, “Wolf Webster” along with a single white heart emoji. The next month, however, Kylie updated her fans with the news that she and Travis decided to change their son’s name.

“FYI our son’s name isn’t Wolf anymore,” Kylie wrote in an Instagram Story. “We just really didn’t feel like it was him. Just wanted to share because I keep seeing Wolf everywhere,” she added, along with a prayer hands emoji.

When the makeup mogul still retained his true name, people speculated that the baby was going by  “Jack” or “Jacques.” TMZ obtained a copy of the KUWTK’s alum son’s birth certificate in February 2022, which revealed that he was given the middle name of “Jacques” after his father, whose real name is Jacques Webster. TMZ’s report also included new details about Kylie’s baby’s birth, revealing that her son was delivered by the same doctor who delivered his sister Stormi almost exactly three years before he was born (Stormi, for her part, was born one day after her brother in 2018.)

While Kylie Jenner’s baby name wasn’t revealed right when the beauty mogul announced her son’s birth, many fans were convinced that her friends and family were dropping clues about what they were calling the little one. Kylie’s mom, Kris Jenner, was among the first to hint at her grandson’s name when she commented the following on Kylie’s announcement post: “Angel Pie.” The comment led fans to believe that Kylie’s second baby may be named Angel or Angelo, or another heavenly name like Halo.

Of course, one comment alone isn’t enough to spark a fan theory; but Kris wasn’t the only one to hint at this heavenly name. Older sister Kim Kardashian also dropped a suggestive comment, which included an angel baby emoji.

Meanwhile, Kylie’s bestie Stassie Karanikolaou hinted at the name Angel again, writing, “angel baby,” along with a heart emoji. Celebrity makeup artist Ariel Tejada weighed in too, commenting, “Can’t wait to meet the little angel,” with another angel baby emoji. Now we know that these were all simply terms of endearment for the reality star’s little one.