Kyle Richards has been on The Real Housewives of Beverly Hills for more than a decade, but she’s never experienced anything like the season 11 reunion.

“I always feel like Andy [Cohen] is our psychologist, and he’s trying to get everything out and have us communicate with each other. But this reunion felt at times like a courtroom,” Kyle, 52, tells STYLECASTER. “There was so much stuff with Erika, and Andy had to go in hard with her because he knows the audience has a lot of questions. He did not hold back. A lot of questions were answered. A lot of things were cleared up. There were people who were upset with each other. They either ended up more upset or they patched things up.”

The RHOBH season 11 reunion saw Kyle and Erika confront their issues over statements Kyle made about Erika’s divorce from her estranged husband, Tom Girardi, and his bankruptcy case during the season. As for where they are now, Kyle explained that Erika was “hurt” over what she saw on RHOBH, but the two repaired their relationship at the reunion.

“The last time I spoke with her, I was texting with her about 10 minutes ago. We’re good,” Kyle says. “Her feelings were hurt about some things she saw on the show, which I understand. It was very confusing. The audience was confused at times. We were also confused. We had a lot of questions. I think she just wanted us to support her blindly, basically, which is understandable because we know her as a person. I’ve never known her to be anything but kind and supportive. I’ve never known her to tell a lie. I can see where she would’ve been hurt, and we address that at the reunion.” 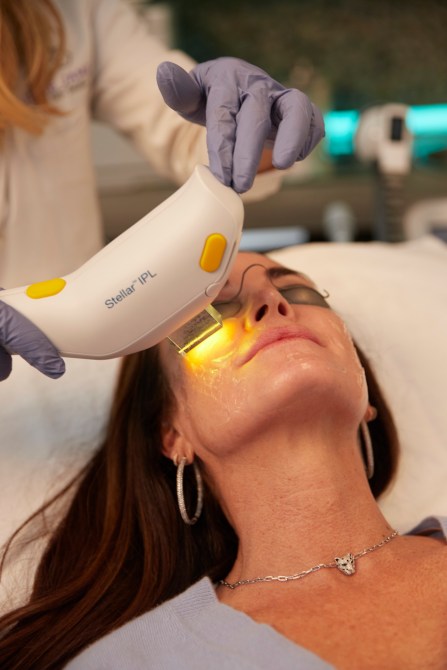 To prepare for one of RHOBH’s most intense reunions yet, Kyle did what she could to look and feel “on point.” That included SmoothGlo, new laser skin-care treatment from Lumenis that promotes collagen growth and diminishes fine lines. “Whenever we’re shooting the reunion, we all want to look our best. You want to bring your A game with your face. Everyone is getting massages, facials, this and that. I wanted to do SmoothGlo before I got there, so I could look and feel my best,” Kyle says. “I mean, I’m not 25 years old, but I want my skin to look like it is.”

Ahead Kyle talked to STYLECASTER about starring in Halloween Kills more than three decades after starring in the original Halloween; the Real Housewives Ultimate Girls Trip fight that happened while the cast was still on the plane; and her reaction to Lisa Vanderpump and Camille Grammer’s claims that she spread a rumor about Erika and Tom’s legal issues at Andy’s baby shower in 2019.

“First of all, everyone who knows me and saw me at the baby shower that day knows I didn’t have two seconds. I was hosting a baby shower. I wasn’t even sitting next to Camille. Everybody who was there has reached out to me and said, ‘This never happened.’ My first thought when that came up was they’re trying to draw attention to themselves, and it seems to me like somebody wants their job back. I don’t know where Camille got that from! I kid you not. I don’t even remember having a one-minute conversation with her at the baby shower that day. And Lisa Vanderpump wasn’t even there. For her to be spreading that when she wasn’t even there, I’m like, ‘You’re about to be a grandmother. Can everybody grow up here? My god. Enjoy your life. Be happy.’”

“It was interesting to me because I was going in not only as a cast member, but as a fan of these franchises. I watch these shows. I was curious to get to know them on a different level. I’d met all of them at different NBC events, but I didn’t know them. I was very intrigued. I was like, ‘Well, there can’t really be any arguments. How could there be? It’s not like we’re in the same franchise. There’s no history.’ Right out of the gate, something happens. We hadn’t even landed yet, and there was already a problem. I was like, ‘Wow. Even for me, this is a lot.’”

“I had a very different idea of who the people were. Some better. Some worse. I was very surprised. I didn’t have any idea of who Luann was really. I got to know Luann better. All of them I got to know better, but some  were just different than who I thought they were—probably Teresa the most. Ramona, you know who Ramona is, and that’s exactly the Ramona I spent the time with. There was no shock there.”

“I really had a lot of fun with Kenya. I think she’d be great on Beverly Hills. Melissa is kind of similar to me. We’re kind of alike. I think of us as the normal ones. I think they’re great where they are, but hey, if they want to come on over to Beverly Hills, they’re welcome.”

On reprising her Halloween character, Lindsey Wallace, in Halloween Kills

“It was very surreal, because playing Lindsey as a child is very different from playing Lindsey as an adult. Trying to think about where my character is at after all of these years and the experiences Lindsay went through as a child that mold her as an adult. I had to think about all of that going into this. It was a lot of fun. It was fun to be acting again and doing what I love most.”

The Real Housewives of Beverly Hills airs Wednesdays at 8 p.m. on Bravo.