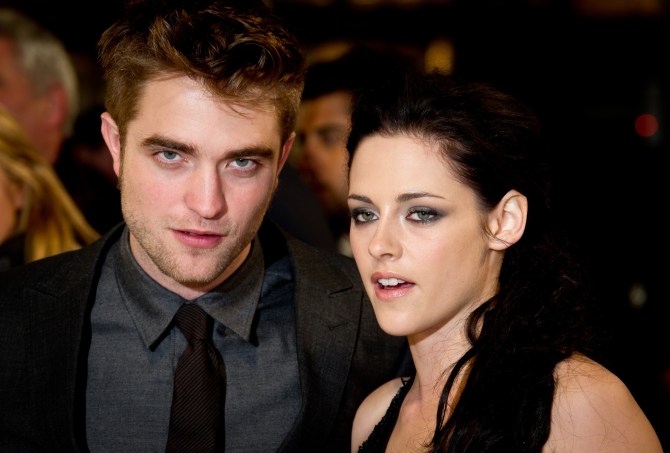 The “Breaking Dawn — Part 2” press tour has officially commenced, which means that over the next few weeks, we will be treated to plenty of Kristen Stewart sound bites. Known not just for her love of Balenciaga and dry shampoo but for off-the-cuff but cryptic remarks to journalists, it’s safe to say that K-Stew is at it again.

This morning on “The Today Show,” Savannah Guthrie inquired about the state of her relationship with “Twilight” costar Robert Pattinson (who she infamously cheated on with “Snow White and the Huntsman” director Rupert Sanders). In her trademark evasive fashion, she responded, “Funny you mention that. I’m just going to let people watch whatever little movie they think our lives are and go for it. Keep them guessing, I always say.”

Considering that the duo have been spotted together numerous times over the past couple of months, we assumed they were together — but after odd quotes like that, it’s hard not to question whether or not their relationship is a publicity stunt. Although they have reportedly been involved since 2009, it wasn’t until October 2011 when Stewart spoke on the issue. On the set of a GQ UK shoot, she accidentally stated in front of her interviewer that she wanted to explore the UK more because her “boyfriend was English.” “I never would have said that if I knew you were interviewing me,” she said later. “[But] so much of my life is easily googled. I mean, it’s like, come on guys, it’s so obvious!”

After the news of her infidelity was confirmed, she released a statement that read, “I’m deeply sorry for the hurt and embarrassment I’ve caused to those close to me and everyone this has affected. This momentary indiscretion has jeopardized the most important thing in my life, the person I love and respect the most, Rob. I love him, I love him, I’m so sorry.” Media outlets were quick to note that this was the first time she’d openly admitted that she “loved” him.

As we wait for the next development in the vampire duo’s tumultuous relationship, we ask you this question: Is “keeping them guessing” a good relationship strategy?