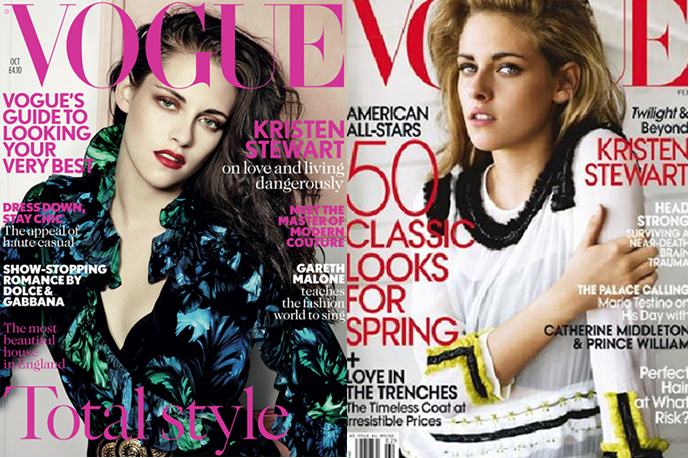 They really pulled out all the stops for Kristen Stewart‘s first British Vogue cover (see above left). The raven-haired beauty was shot by legendary photographer Mario Testino, and she looks stunning in a grown-up Gucci gown. Staring at the camera seductively, it’s hard to remember this is the girl who actually prefers Converse to Louboutins.

In her first interview since her now-infamous affair with Snow White and the Huntsman director Rupert Sanders, she made vague, broad statements about fame and all that comes with it.

“People expect it to be easy because there you are, out there, doing the thing that you want and making lots of money out of it. But, you know, I’m not that smooth. I can get clumsy around certain people. Like if I were to sit down and think, ‘OK, I’m really famous, how am I going to conduct myself in public?’ I wouldn’t know who that person would be! It would be a lot easier if I could, but I can’t.”

It doesn’t take a rocket scientist to figure out that she’s probably alluding to the Sanders debacle, and her distate over her fame. Back in February 2011, when she was far more revered in the eyes of the public, she covered American Vogue with lighter hair, lighter makeup and a lighter look. But the sentiments remained the same. She told the mag, “There’s no way to eloquently put this. I just can’t go to the mall. It bothers me that I can’t be outside very often. And also to not ever be just ‘some girl’ again. Just being some chick at some place, that’s gone.”

Although her quotes are somewhat similar, her ‘tude and style have clearly evolved immensely. The folks at British Vogue clearly took her recent indiscretions in account, and painted her as a tortured soul — down to her edgy straight-off-the-runway gown.

What shade of K-Stew do you prefer?