There’s not much left in the world that Kristen Bell can’t do. She’s proved she’s savvy and hilarious, starring in television series like Veronica Mars and The Good Place. She’s raising two kids. She’s started her own eco-conscious baby line, Hello Bello. And, oh yeah, she’s casually a fantastic singer. Jimmy Fallon and Bell’s “History of Disney Medleys” on The Tonight Show yesterday is one of the best segments we’ve seen in a while. Fallon has some great vocal chops, as does Bell. And it was perfect for the adorable blonde, because Frozen 2 is heading to theaters. Bell stars once again as the adorably clumsy but fiercely loyal, Anna. When Frozen came out, fans were stunned to hear Bell’s singing. Starring against Idina Menzel (as Elsa), couldn’t have been easy. When asked if shew was intimated to work with the former Wicked star, Bell exclaimed, “YES!!” She then explained, “I mean she’s like the best singer on the planet. Currently on the planet.” But Bell totally holds her own with the acclaimed Broadway actress, an impressive accomplishment. And last night, she proved she can perform under pressure! The stakes are high on live television—very different from a recording studio—and Bell handled it like a total pro, belting out songs from some of Disney’s greatest hits.

Fallon and Bell literally took on a whole new ride on a magic carpet with this one. They started with Pinocchio’s “When You Wish Upon a Star,” and finished with—you guessed it—Frozen’s hit song, “Let It Go” (which, BTW, Bell crushes). Along the way they hit staples like “Supercalifragilisticexpialidocious” from Mary Poppins, “The Bare Necessities” from The Jungle Book, “Can You Feel The Love Tonight” from The Lion King, and so much more. There’s nothing better than watching Fallon, with all his boyish charm, cut loose. 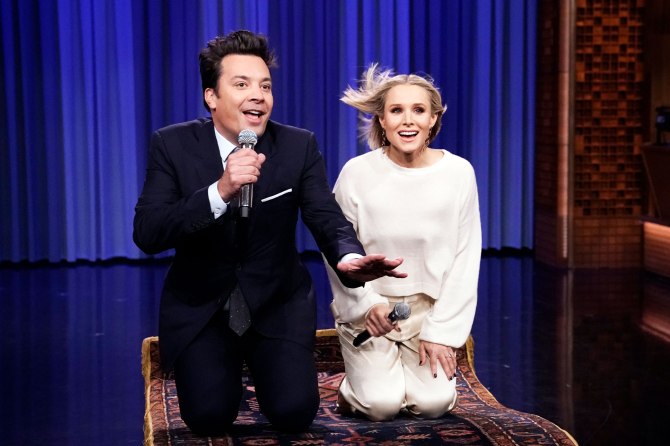 This isn’t his first time with this segment—Fallon previously did “The History of Rap” with Justin Timberlake and “The History of Dance” with Jennifer Lopez. They were all stellar, but we think this Disney one might be the best. It will have a special place in all Disney lover’s hearts.

If you listen closely, you’ll even hear Jimmy sing (scream) a new song from Frozen 2—”Into The Unknown.” As you can see from the video above, Bell was the perfect scene partner for this adventure. She’s “practically perfect in every way,” just like Mary Poppins, amirite? Bell waited a long time to play a Disney princess, and her dream came true when creators approached her about voicing and creating the role of Anna. The Veronica Mars actress originally auditioned for a different Disney film but didn’t quite fit what they were looking for. “I auditioned for Tangled and after my audition the casting director pulled me aside and she said, ‘oh that was great and if we go another way,’ which I think she knew they were, um, ‘but I want you to meet Chris Buck because he’s directing a project that’s a few years down the line called The Snow Queen, and I think you’d be right for it.’” Mandy Moore ended up snagging the role of Rapunzel in Disney’s Tangled but we got Bell as Princess Anna so no one is complaining!

The timing of this little ditty couldn’t be more perfect considering Disney+ also launched yesterday. It’s the streaming platform of our dreams—all of Disney’s family-friendly content and more are available for streaming. It will also have content from Marvel, Lucasfilm (AKA Starwars), Pixar and National Geographic. The platform is $6.99 per month or $69.99 per year. And, coincidentally, Kristen Bell actually has a docuseries available on Disney+. It’s called Encore!, and it has former teenage theater geeks return to their high schools to re-stage an old musical. This includes some current Broadway stars and some people who left performing behind when they left their alma maters. “No matter what job you had, everybody wanted to come back,” Bell explained. “That speaks to how much you grow as a human being from high school to adulthood. We have a 44-year reunion in this show featuring the cast of Anything Goes at Los Angeles High. They come back on stage and they nail it! Everyone wanted to do it. There is something beautiful about reintroducing yourself to your friends and shedding the labels that you had, the box you were in, before you knew how to communicate, before you knew what vulnerability meant.” Bell goes into a bit more detail below:

Turns out Disney has been a powerful teaching tool for the Frozen 2 actress and her husband, Dax Shepard. It’s really helped the two parent their two children. At the Frozen 2 premiere in Los Angeles, Bell told People that she uses Anna and Elsa as example for her own to girls, Lincoln and Delta. 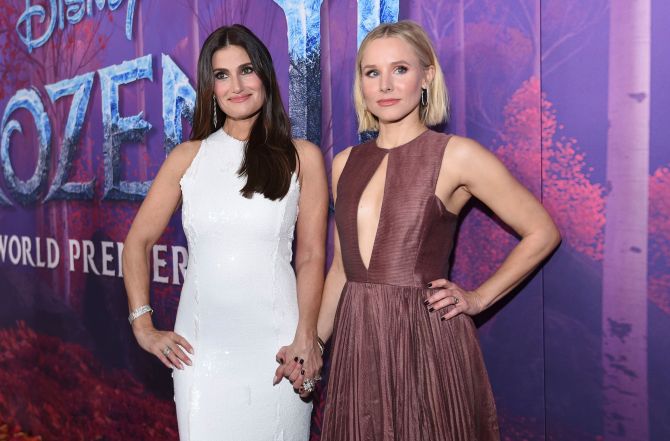 “That’s the power of story, right?” Bell added. “They respect this story so much and they know this narrative and they know these girls care, so it’s an easy way to pop them out of their anger and think about being kind for a second.”

FYI—Frozen 2 hits theaters on November 22nd, so get your tix now and invite the whole fam!