Perhaps chivalry isn’t dead after all! While out and about town, Kourtney Kardashian and Younes Bendjima were together post-breakup. Kardashian broke up with Bendjima back in July 2018, but that didn’t stop her ex-boyfriend from paying for her coffee after their L.A. run-in.

According to a source for TMZ, Kardashian and Bendjima randomly ran into each other this weekend at Alfred Tea on Melrose Place. Apparently, Bendjima was already in line when Kardashian approached with her friends to give a friendly hello. The person who snapped the photos of the former couple said the two were flirty—Kardashian even gave him a kiss on the cheek goodbye. It all sounds pretty friendly and mature of the broken-up couple to us, but hey—you never know. Perhaps this run-in will be the start of something new (again) for the reality star and the model.

Kardashian first met Bendjima back in 2016. In an episode of Keeping Up With The Kardashians released in November, 2016, Kardashian explained how she met the young model at a bar during Paris Fashion week.  “He was friends with our friends,” Kardsahian said. “He would walk in, say hi, shake hands with like our security or whatever, but like not say hi to us. And then I was like, ‘Why do you hate us?’ I was just drunk. Once I said that he literally like grabbed my hand and was like, ‘It’s five in the morning. We’re leaving. And then next night Younes was like, ‘Bring your ass here.'”

Kardashian then added that this all happened right before  her Kim’s robbery. “Then when we walked into that club was when we went to the bathroom and got the phone call about Kim,” she explained. “So then the party was over. And then he was like, ‘I’m not leaving you guys,’ and he like had to translate everything.”

Nearly one year later, the couple took a spontaneous trip to Egypt. The trip was apparently all Bendjima’s idea. Kardashian and Bendjima flew abroad together and at the time, a source told E! News that the reality star “[was] trying to live it up as much [that] summer and she couldn’t wait to see [Bendjima] again. He planned this adventure for them and wanted to take her somewhere new and exciting.”

On August 15, 2017 Kardashian shared this beautiful photograph of her then-23-year-old boyfriend and her riding camels. He definitely got the adventure part of the trip right!

Here’s a photo of the pair frolicking in the water together. 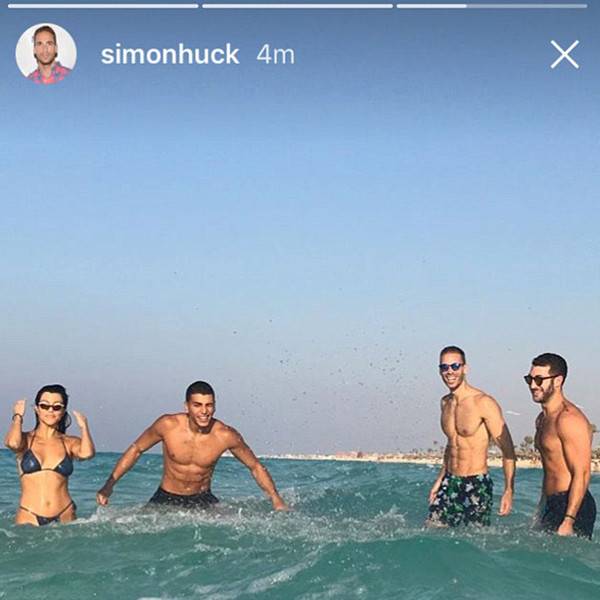 In May 2018, Kardashian decided to surprise her boyfriend with a birthday trip. On her Instagram story, the reality star wrote, “For once, he has no idea where we’re going.”

The couple landed at the Amangiri resort on the Colorado River, Cosmopolitan reported. And it looks like the couple had quite the adventure on this trip too! Check out their climbing:

But after some Instagram drama and rumors of Bendjima being unfaithful, the couple called it quits.

Bendjima got upset over an Instagram Kardashian posted of her in a thong-bikini. “That’s what you need to show to get likes?” the model asked his girlfriend before quickly deleting the comment.

Fans clapped back at Bendjima, calling him out for the double standard— he’s allowed to post shirtless pics for likes but she can’t post a bikini shot?

It’s been a whopping seven months since the couple has dated but they definitely seemed to be on good terms when they ran into one another in La La Land.

Here, the reality star can be seen leaving with her coffee in-hand.