It’s always a delight when people are mature and grown up. Kourtney Kardashian and Sofia Richie chilled at Scott Disick’s birthday party and it was super refreshing to see. Reign, Mason, and Penelope’s dad turned 36 over the weekend (Jesus how old are we?!) and to celebrate himself, he threw a low-key celebration with all of his kiddies, the KarJenners, and his 20-year-old lady love.

When Disick and Richie started dating–it was a hot mess express. Per usual, the Kardashians were talking greasy about the model because of her age. Luckily, they realized that had greater concerns, and Kourtney put on her big girl panties, even going on family trips with her kiddos, Scott and Sofia. It looks like the eldest Kardashian’s example has forced her siblings to calm down and focus on their own lives instead of bullying Richie.

Lionel Richie’s daughter hopped on IG to share some photos from the soiree where she posed with her man, some of his friends, as well as Kourtney and Kylie. Richie also celebrated Disick in her Instagram stories calling him “muffin” (barf) and her best friend. Kylie also shared a photo of herself with Penelope, cuddled around a firepit after the party had died down a bit. It looks like a good time was had by all. 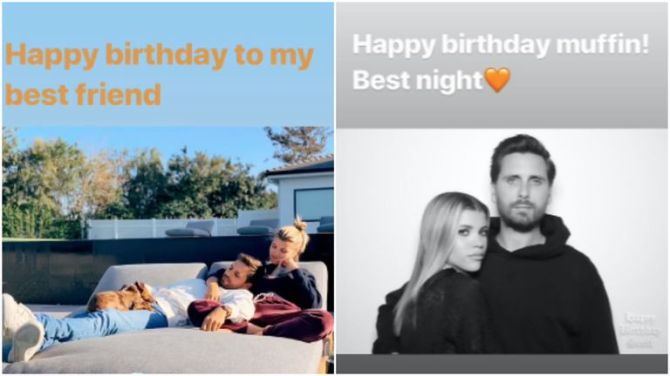 At one point during the uber-casual soiree, there was a mini dance party between Kourt, Khloé, and Kylie, and somehow everyone ended up in Scott’s super luxurious bathroom. The man has a ton of towels and apparently he also uses Kylie Skin to keep his face as smooth as a baby’s butt.

A source close to the KarJenner and Disick clan to Hollywood Life, “Having Sofia and Kourtney together celebrating him and getting along was the best gift Scott could have asked for. “He’s so happy that there’s no drama between Sofia and Kourtney. He has put in a lot of effort to get everyone to this good place, and now it’s to the point where everyone is on board and it just feels natural to everyone.”

The Poosh founder recently told Paper Magazine that her relationship with Scott and Sofia is, “probably the thing [she’s] most proud of.”

We’re super pleased that everyone is getting along. Life is too short to be petty and angry all the time.