With over 90 million followers on Instagram and a successful (if not drama-filled) run on her family’s reality TV series, Keeping Up With the Kardashians, Kourtney Kardashian’s net worth is obviously far from scant. Like her sisters, the socialite has leveraged her career for opportunities well beyond television, making her quite the savvy businesswoman.

If Kylie Jenner’s net worth as the youngest “self-made” billionaire was any indication, older sis Kourtney isn’t doing too bad herself. While she isn’t quite on Ky’s level, the mother of three keeps up a steady stream of income thanks to ventures even beyond KUWTK, including but not limited to social media endorsements, apps, and a host of brands—like her lifestyle and e-commerce site, Poosh.

Whether or not those sources amount to her whopping KUWTK salary is another question, though. Following a “violent” fight between her and younger sister Kim on the series, the mother of three confirmed her plans to quit the show. But even with her departure from the series, the eldest Kardashian sister didn’t need to be too worried about the slash to her income. Kourtney’s net worth was definitely hefty enough to hold her over—and comfortable enough to let her focus on the things that matter most to her now (which might even include Baby No. 4—who knows?) Plus, with her family’s new series The Kardashians on Hulu, Kourtney’s net worth is already looking up.

Read on below to find out just *how much* we’re talking about when it comes to Kourtney Kardashian’s net worth in 2022, and catch up on Keeping Up With the Kardashians and The Kardashians at the link ahead.

How much did Kourtney Kardashian make from Keeping Up With the Kardashians?

Back in 2017, momager Kris Jenner confirmed that each KarJenner sister received the same salary from Keeping Up With the Kardashians per season. “Everybody gets paid pretty much equally, because we all film a lot and we all work hard, and we’ve created this show and this brand for the last decade. Everybody’s happy,” Kris shared in an interview on The Ellen DeGeneres Show.

At the time, that meant the KarJenner sisters were generally earning around $4.5 million per season. Now, that’s just a baseline salary based on their involvement in the E! series. Some sisters, like Kourtney, also have production credits on the show—making their income slightly higher. According to IMDb, Kourtney served as an executive producer on KUWTK from 2015 to 2016. During those years, fans can assume her income was a little more generous.

What is Kourtney Kardashian’s salary for The Kardashians? 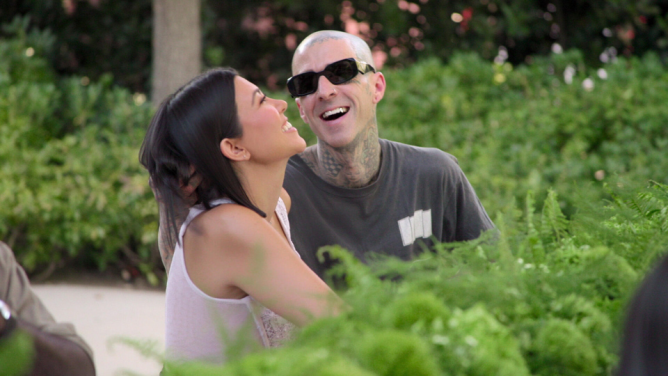 After wrapping up Keeping Up With the Kardashians in 2021, the KarJenner family announced the release of a new reality TV show, The Kardashians, on Hulu. The series, which premiered in April 2022, is reportedly bringing in a whopping nine-figure salary that will be split evenly among the family, per Variety.

Kourtney’s sister Khloé confirmed to the publication that each member of the family will receive the same salary. “We are all equals,” she said, noting that the monetary aspect for their contract negotiations was an important part of their decision to return to reality TV. “It definitely played a factor because we give so much of our personal lives up for entertainment,” Khloé explained. “We always have our private family conversations, and we’re pretty brutal, me and my sisters, with what we will settle for or not settle for.”

“But not all money is good money,” Khloé said, adding that the Kardashian family also wanted their next opportunity to align with their goals. “It has to be a good fit, and Hulu was just the perfect fit for us. It can’t just be for monetary gain. That doesn’t seem to work for us.”

She continued, “It sounds so old fashioned, but we are people who applaud ourselves in so many other facets of our life that we are ahead of the time. We wanted to be with someone that’s tech forward, so we’re with the times. For us to be still on cable was just not so on brand for us. My mom deals with all the negotiating, and we let her do that because it is uncomfortable. She fights like a pit bull. She loves to do it and we let her do it.”

Walt Disney Television’s chairman of entertainment, Dana Walden, also confirmed that the Kardashian family’s deal for their Hulu show did not come cheap. “We stepped up to a great deal that they very much deserve,” Walden told Variety, suggesting, however, that the family was well worth the investment. “Who would you want more for your unscripted slate than the Kardashians? They perfectly symbolize our strategy, which is taking big shots, but the right shots, and betting on incredible talent and best-in-class opportunities in each genre.”

What is Kourtney Kardashian’s net worth?

She has also funneled investments into several avenues beyond the family’s shared reality TV series. Her current lifestyle brand Poosh is one of them. In the past, however, Kourtney has had her fair share of external business ventures. In 2006, she opened a boutique chain with her sister Kim (and even launched a spin-off show for its employees). She also invested in a child clothing store, Smooch, with momager Kris Jenner. As both businesses have since shuttered, Kourtney is staying flexible when it comes to Poosh.

“I think with new business ventures, sometimes they can, you know, take a little bit [longer] to return than you expected,” she shared with CNBC in late 2019. “If it’s not the right thing, people have a short attention span and you [just] move on to the next.” For now, however, it seems fans are more than happy to stick along for the ride.