It’s official. Fans have been on the lookout for if Kourtney Kardashian’s last name will be changed after her marriage to Travis Barker. The Poosh founder confirmed that she will be hyphenating her last name as “Kardashian-Barker” by changing her name on Instagram.

Kourtney previously seemed to hint at her name change on Instagram. In an Instagram story after her second, but official, wedding with Travis Barker, Kourtney posted a dessert with the Blink-182 drummer’s last name. The cookie read “Mr. + Mrs. Barker” wrapped around different florals. Close friends of the Kardashian clan, Simon Huck and Philip Riportella, gifted the giant cookie right after the wedding in Santa Barbara on May 18, 2022.

Fans on the Keeping Up With the Kardashian‘s Subreddit r/KUWTK debated whether or not the newlywed will change her last name or not. One user said, “I think she’ll do a hyphenated version. Kardashian-Barker or vice versa.” Another user disagreed and said that Kourtney respects her own last name, “I think Kourtney loves her dad too much to ‘give up’ his last name. I see her as forever wanting to honour home. I bet she’ll hyphenate.” A third perspective was put in place when a user said, “Plot twist, Travis Kardashian.” 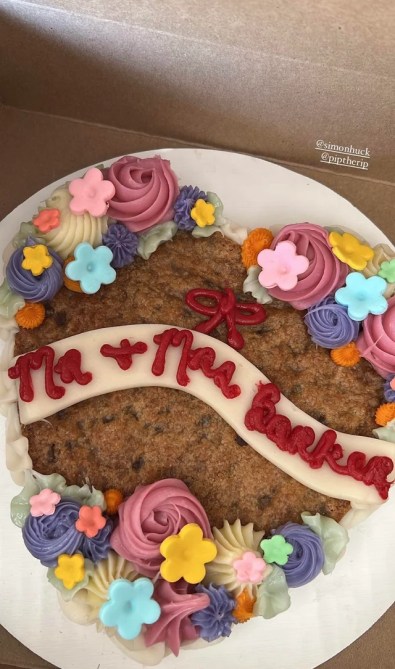 An insider told HollywoodLife on May 23, 2022, that the newlywed wanted to change her name wholly but was advised to keep Kardashian. “She really feels that it is meaningful to Travis and herself. Her family was advising against [her changing her last name to just Barker] because she has so many ties to Kardashian. They suggested that she combine their last names, like what Kim did when she married Kanye [West], so that is ultimately what she decided to do”.

Travis and Kourtney’s official wedding in May comes after their practice wedding in Las Vegas on April 3, 2022. The duo got married after Travis performed at the 64th Annual Grammy Awards. They did not have a marriage license on-site with the Elvis impersonator. She posted the moment on Instagram, “Once upon a time in a land far, far away (Las Vegas) at 2am, after an epic night and a little tequila, a queen and her handsome king ventured out to the only open chapel with an Elvis and got married (with no license). Practice makes perfect.” The two got their marriage license after marrying in Santa Barbara on May 15, 2022. They got engaged in the same area in October 2022 and plan to have an even bigger wedding with their whole family involved.