After 20 years in the NBA, Kobe Bryant is hanging up his Lakers jersey for good after today, a day that Nike has dubbed #MambaDay. Bryant, or the “Black Mamba,” has had an NBA career most players only dream of — he joined the Lakers straight out of high school and stayed with the team for the entire duration of his career, counting legends such as Shaquille O’Neal and Metta World Peace as teammates.

For as long as I can remember, Kobe’s been playing ball — and not just playing, but completely dominating the game. In 20 seasons, he’s netted five NBA championships and 18 All-Star titles. He helped to build the Lakers’ legacy and was a major contributor to their glory days (although this past season’s drama both on and off the court definitely proves that Bryant’s retirement is probably coming at the right time) and will leave as the team’s all-time leader in points, 3-pointers, steals and games played. To be honest, it seems weird to even think of an NBA season without Kobe — but after 20 seasons, it’s time to say goodbye.

His retirement, of course, has all his fans feeling all the feels, with everyone from LeBron James to Magic Johnson and even Drake posting #MambaDay salutes.

.@kobebryant I've enjoyed every minute of your career. #ThankYouKobe for all of the fantastic memories! #MambaDay pic.twitter.com/W6X0S9kdOu

Thank you for everything. #MambaDay

However, I’d personally like to use #MambaDay as a time to reflect on what might be Kobe Bryant’s most important career highlight — the fact that he took Brandy to prom. 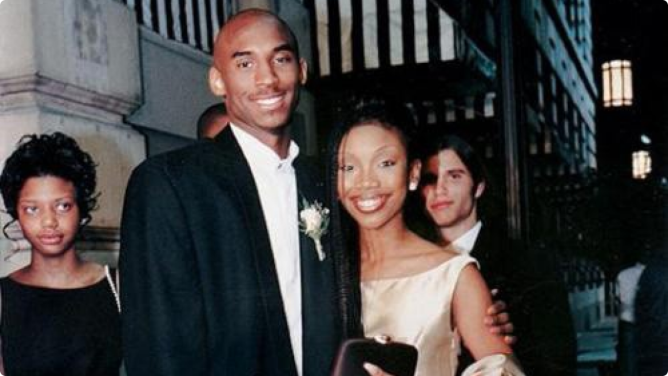 The two met at the Essence Awards in 1996, when Kobe was just a talented 17-year-old high school baller from Philly who was a big fan of the also 17-year-old platinum-selling singer (who’d just won a Grammy and had her own TV show, “Moesha.”). After meeting, Bryant decided to ask her to prom (because who wouldn’t want to take Brandy to prom?!?) — and gracious queen that she was, obliged her fan’s request by not only going to the prom with him, but showing up in a Moschino gown.

In an interview with Philly.com, Bryant’s mother said he made up his mind after the awards show. “He came home from the Essence Awards and said, `I met such a nice, beautiful, intelligent, sweet person.’ Then when [Brandy] called, she said, `My mom might let me go.’ I thought it was so sweet.”

Here’s to Kobe Bryant, NBA legend and ultimate fan boy. Thanks for the memories.