In case you had any doubt that “ridiculous” is simply the best adjective to describe Kim Kardashian and Kanye West, this oughta do it: The self-obsessed pair sat front row at the Lanvin fashion show in Paris and both wore coordinating tops that unleashed their boobs onto the world. 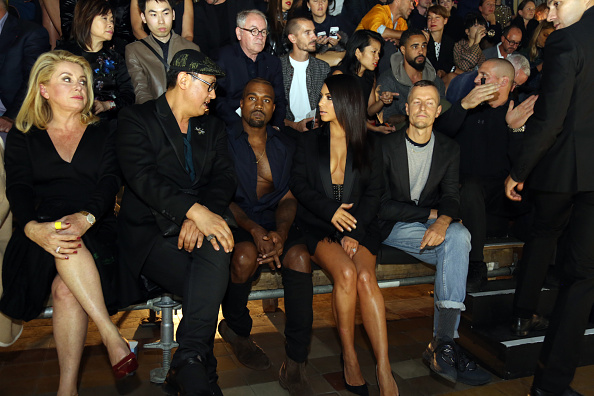 True to form, Kim chose an oversized unbuttoned tuxedo jacket that barely covered her breasts, while Kanye showed off some serious pecs in a mostly-unbuttoned shirt. Oh yeah, he also wore some sort of slouchy boot-leg warmer hybrid. So fashion-forward, dude.

The Lanvin show took place a few hours after Kardashian was “attacked” outside the Balmain show by Ukrainian prankster Vitalii Sediuk, who reportedly tried to hug the reality star but ended up nearly tackling her to the ground.

Obviously, Kardashian’s private security team stepped in (and she still went to the show—such a fashion trooper!) but a video exists, which you can see below.

Clearly, nearly getting trampled isn’t enough headline fodder for one day, considering the boobfest that followed.