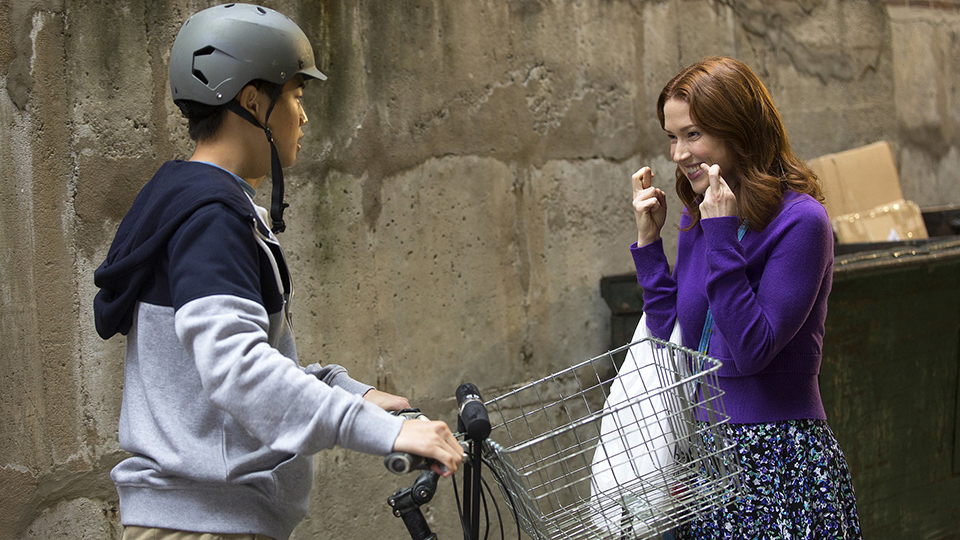 A year ago, Netflix brought the weird and wonderful “Unbreakable Kimmy Schmidt” into our living rooms for the first time, and now, the show is back for its second season, bringing with it its unforgettable cast of characters: the resilient yet naive Kimmy (Ellie Kemper), who’s spent 15 years of her life in an underground bunker; Jacqueline Voorhees (Jane Krakowski), the now-divorced society lady who clawed her way to the top; and Titus Andromedon (Titus Burgess), the aspiring Broadway star who left his closeted past behind in Mississippi.

Such a colorful group of people deserves an equally colorful wardrobe, and the costumes are a key part of what makes each character stand out (can you imagine Titus’s “Peeno Noir” performance without his gold leggings and sequin top?). The costume designer behind the outfits is Tina Nigro, an industry veteran whose résumé includes such less-than-comedic shows as “Law and Order: SVU” and “Oz.” In making the move to comedy, she says, she’s had more freedom to put personality in the clothing—and in some cases, such as with season two’s hipster plotline (featuring Zosia Mamet as the prototypical gentrifier), make the ensembles an integral part of the scenes.

Read on for her take on the characters’ evolutions this season and what it’s like to work in television in the binge-watching age: 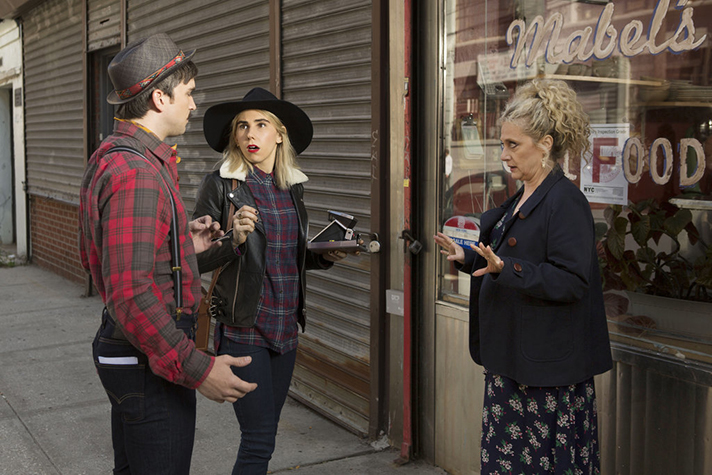 STYLECASTER: In season one, Kimmy just got out of the bunker, and her wardrobe really seemed to reflect that—it was colorful and clashing and basically everything New Yorkers generally avoid. How did that evolve for season two, now that she’s spent some more time in the outside world?
Tina Nigro: I think it’s a little bit more mature. She’s still kind of quirky and she does her own thing, and it’s still really colorful, but there aren’t as many color combinations—it’s a little more sophisticated. There’s still optimism and she’s still childlike, but maybe not as much as season one. But she still doesn’t wear too many designer designers—it’s like Sears, JC Penney, Forever 21, thrift stores, and Beacon’s Closet in New York. Almost all of her clothes are pretty affordable—they’re not designer, because she wouldn’t have the money for that.

Jacqueline has also gone through some personal change—did you make any changes to how she dresses now that she’s newly independent?
She’s still pretending that she has money—you know, she has $12 million, that’s not nothing. We used a lot of white in the first season, and she was maybe a little darker in this one, but still designer all the way. Who knows about next season, if she’ll repeat things, but she’s pretty much somebody who does not repeat her outfits. She’s all about presentation. When she goes to the auction, she’s wearing a Pucci blue leather. When she goes to places that she knows she’s going to be seen, yes, she’s a little more sexy and vamped up. But we haven’t seen her with Julian where obviously she’s trying to prove something to him.

What designers did you dress her in this season?
Gucci, Pucci, J. Mendel … her gowns are always J. Mendel for some reason—I don’t know why; we try other ones, and those are the ones that usually work. It’s really bad because I’m not into designers.… I buy what I like. I don’t know designers. I walk around and I see what I like and I buy it, so I don’t really care who it’s made by. She wore Fendi a lot, we got a couple of Fendi things. Everything that she wears is top designer and from the current season—she’s not wearing anything old, really.

One of my favorite outfits was Titus’s tuxedo in the flashback to his wedding. How did that come about?
Of course, he would wear a peach tuxedo. I mean, I don’t know what else he would wear, unless it was leather. I just saw it and I was like, “We need to buy this now, because it’s amazing.” It’s very early ’90s—you didn’t really see her outfit too much, but the dress was high-low—it was pretty funny. If I remember correctly, we got the suit from Men’s USA online and the vest from a store in Harlem. I designed the coat and hat, and one of our amazing tailors, Daniel, made it for us. Vonda’s dress was from JJ’s House.

Did you have a favorite episode this season, costume-wise?
The hipster episode was fun. With Zoe and her boyfriend, we just tried to take every hipster trend that was available—it was a little over-the-top with him in suspenders and plaids and a hat. I really liked Titus’s hipster costume, too—I thought it was funny in a really bad way. I also love doing those kooky characters in the place that Titus works [Professor Dracula’s Spooky Laboratory]. Before this, I did a lot of dramas, so I never had to do any of those furry costumes, so it’s something different for me.

Do you have to take into consideration the fact that many viewers of the show watch it back-to-back, rather than once a week?
It’s funny because I do mostly television, and what I do is I’ll build people’s closets and then I’ll pick things from the closets—so people do repeat a lot of things, especially in something like a cop show. And with Kimmy, I want to repeat things for her, but I don’t want it to get boring where she’s wearing the same thing all the time. She repeats a lot of jackets, she repeats her pants, but I try to break it up, and I’m conscious of what she wore the last episode or the last two episodes, so I don’t repeat something right away, because people binge-watch it. It’s something that you never had to think about before, because it was always a week in between episodes, and if somebody remembered that this character wore that tie or whatever, good for them! Have fun writing it on the Internet.

Do you have any advice for readers who want to break into costume design?
It’s a lot of hard work. I think a lot of people get into it thinking, like, “Oh, I love to shop,” and “It’s so glamorous”—and it’s not at all. You work a lot of hours. We always say 12 hours is a good day—we can’t work over 14 now in certain jobs, because they put a stop to working 16- and 18-hour days. Some days you go in at 5 o’clock in the morning, and some days you go in at 5 o’clock at night. Some days you’re in pretty nice places, and some days you’re in really disgusting places. There are a lot of personalities that come into play between writers and producers and actors and showrunners, and sometimes they all have an opinion. It’s trying to balance and get the best thing so that you’re not compromising yourself too much, but everybody’s happy. It’s a lot of negotiating—it’s not like, “Oh, I go shopping all day long and I buy pretty clothes,” but it’s fun and it’s rewarding and it’s never really boring.