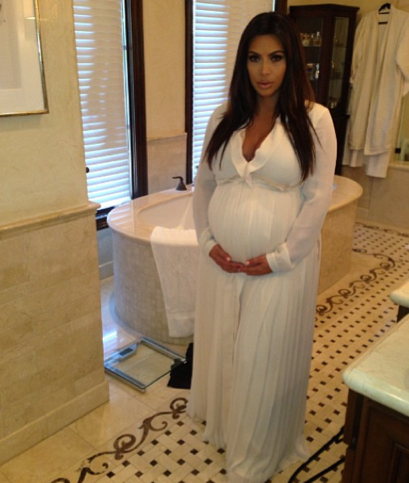 Despite a flurry of blurry paparazzi shots, we were actually unable to fully see what Kim Kardashian wore at her blowout baby shower bash last Sunday until she uploaded the above photo to Instagram. We were able catch glimpses of some of the famous attendees, including the mom-to-be’s sisters Kourtney and Khloé (who wore very similar dresses to Kim), Nicole Richie, and NeNe Leakes. Yes, NeNe Leakes was there, so you know it was a major event.

Now that Kim’s nearing the tail-end of her pregnancy—and it’s public news that she’s expecting a baby girl with Kanye West—she seems to finally realize that it’s okay to dress comfortably. (Probably a good idea, since she made headlines a few weeks ago when she stepped out in plastic Givenchy sandals that looked like sausage casing around her incredibly swollen feet.) But for her baby shower, it was strictly comfort all the way. The 32-year-old wore a loose floor-length white Lanvin gown that looked like something she snagged from Stevie Nicks‘ closet.

Truth be told, we’ve admired several of Kim’s high-style maternity choices, from the floral Prada she wore to dinner at Anna Wintour‘s house to the divisive floral ensemble Riccardo Tisci designed for her Met Gala appearance that many likened to a couch. But the baby shower dress looks comfortable and stylish. Plus, she managed to accessorize with loads of bronzer and stick-straight hair, which brings back fond memories of her “I do club appearances in Vegas every weekend!” days.

This is by far one of Kim’s best maternity looks, and it’s making us a little sad that less than a month from now we’ll have to pick someone else to style-stalk when they’re with child.

MORE ON STYLECASTER:
Kim Kardashian Attends Met Gala in Floral Dress by Riccardo Tisci
Kim Kardashian Is Having a Baby Girl: 5 Scenarios That May or May Not Occur
Report: Kim Kardashian to Sing on Kanye West’s New Album