Being rich and famous doesn’t always save you from shitty situations, Kim Kardashian’s tarantula spider infestation photos are seriously making our skin crawl, and we’re nowhere near Calabasas. So Kim and her rapper hubby, Kanye West spent a great deal of time and money on their museum-like minimalist home. Seriously, it’s both calming and terrifying.

In a way she probably never expected, the empty AF house is probably a good thing. Last night after putting her four kiddos, Noth, Saint, Chicago and Psalm, to bed –Kim was doing her nighttime routine when she got the scare of a lifetime. Like something out of a nightmare, Kim noticed multiple tarantulas crawling through her garage. No MA’AM!

The KKW Beauty mogul went to the garage to retrieve a package, and this is what she was greeted with. Seriously, we’re surprised she didn’t wake the entire house up, pack her kiddos and head either to a hotel or Mama Kris Jenner’s house. There is no way in the universe we would be sleeping in that house.

When she saw the first spider, Kim snapped a picture of it saying, “What in the actual f*ck.” She posted a second photo saying, “I won’t be able to sleep tonight knowing this was in my garage.” 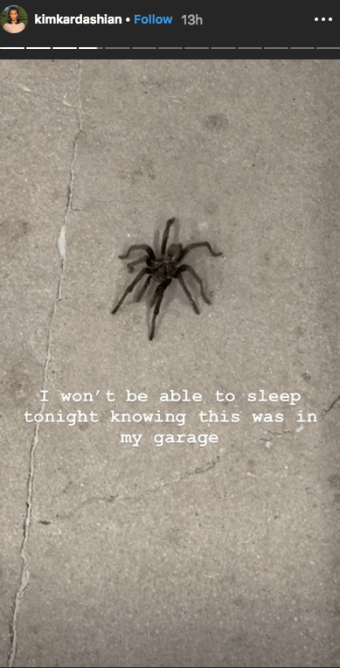 Unfortunately, that’s not where the terror ended. Early this morning, Kim added another story to her Instagram, saying, “So there were 3 tarantulas last night. It’s mating season apparently.” 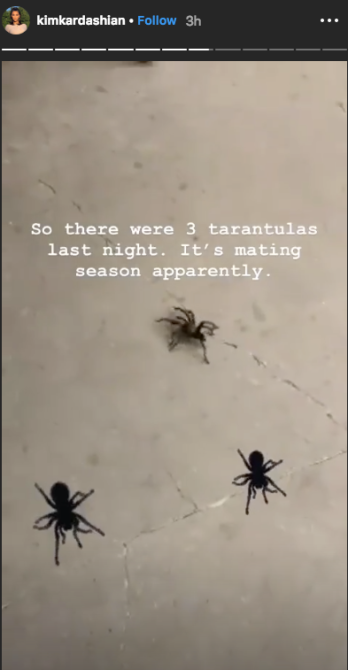 This is why we don’t do nature. According to the Los Angeles Times, mating season for these creators continues through the end of Oct. “That means the giant arachnids will spend the next two months weaving webs just above ground, outside the female’s burrow.”

So like… we’re just supposed to live with this?!