Whenever I’m feeling bored with my look, I know that I can count on Kim Kardashian for some much-needed style inspiration. While some stars stick to one look for the entirety of their career, Kardashian has become quite the style chameleon, always trying new things and pushing boundaries. That said, Kardashian’s style has come a long way since her days of clubbing it up with Paris Hilton in the early aughts—and I have the photos to prove it.

Let’s start at the beginning, shall we? Her look at the beginning of her career was all about going big: Big hair, big glam, tall heels, tight dresses—the works! When she first started appearing in tabloids and on television, Kardashian’s style was all about looking sexy, all the time. Body-con dresses by Herve Leger were staples in her wardrobe, as were platform stilettos and tons of blingy jewelry. Her hair was always perfectly coiffed into bouncy waves and the glam was on! point! even if she was just running errands.

Things took a sharp turn for the minimal when Kimmy got together with her now ex-husband rapper Kanye West. It’s actually impossible to discuss Kardashian’s style evolution without mentioning West, as their relationship completely transformed Kardashian’s look. Her wardrobe was still undeniably sexy, but with a more elevated, modern twist.

Kardashian’s style during this period of her life wasn’t any less glamorous, but something about it felt far more approachable. While not everyone has a reason to wear a micro-mini dress and Louboutins on the daily, her legions of fans were able to copy her matchy-matchy ‘fits as she began to favor biker shorts, cargo-style sweatpants and cropped tees. Subdued tones like grays, creams and browns dominated her wardrobe as Yeezy sneakers replaced high heels. Kim was comfortable with herself and her marriage—and from this, a more comfortable wardrobe came naturally.

It was also around this time that Kardashian launched SKIMS, her best-selling loungewear and solutionwear brand. The range of stretchy, easy-to-style options were seamlessly integrated into the reality star’s street style ensembles from the jump—which, of course, turned each SKU into an instant best-seller. The launch of SKIMS further confirmed that Kardashian could make anything sexy, even shapewear. Thanks to the inclusive colorways and impressive size range, the Internet ate it up.

Let’s fast-forward to this year, shall we? After the couple announced their separation in early 2021, another sartorial shift took place. Kimmy began to revert back to the types of pieces that made her style so iconic in the first place. Corsets and mini dresses were the stars of the show on a recent trip she took to Italy in July 2021, reminding fans of her club girl days in the very best way. She even wore a lacy cut-out dress to the Vatican!

Still, her desire to dig out her single-girl style again doesn’t mean she’s let go of all that she’s learned over the past few years. There are obvious hints of her more subdued West-influenced style woven into her new looks—and many would argue that she’s finally achieved the perfect combination of sexy, playful and neutral that she’s been after for so long. Her looks are sometimes simple but always inspired. Clean and sleek, but never boring.

One can only guess where Kardashian’s style journey will go in the future, but I’m sure that she’ll always keep us on our toes. Keep reading to see a few of her best looks from 2021 all the way back to the good ol’ days and reminisce about every single iconic era. 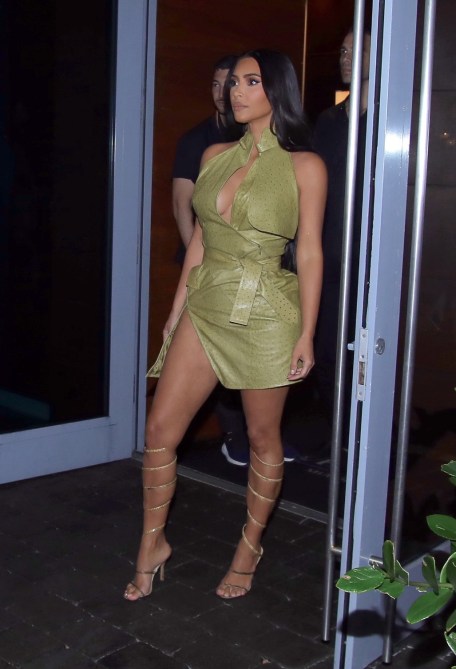 Kardashian wore this lime green mini dress in April 2021, proving that she can pull off just about any color—not just neutrals. 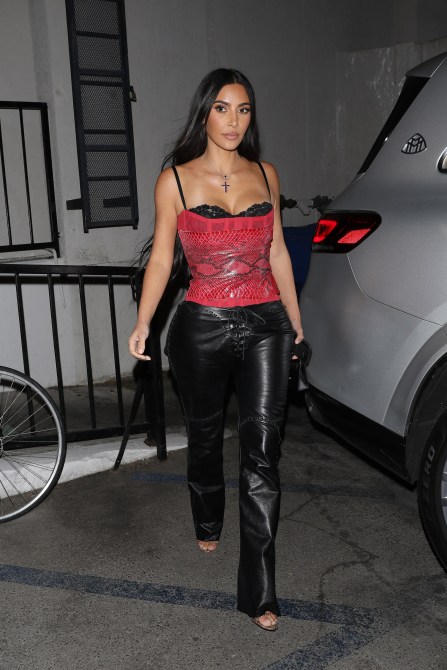 This full-leather look from April 2021 marks a return to Kardashian’s classic sexy style, but with a modern, rock ‘n’ roll edge. 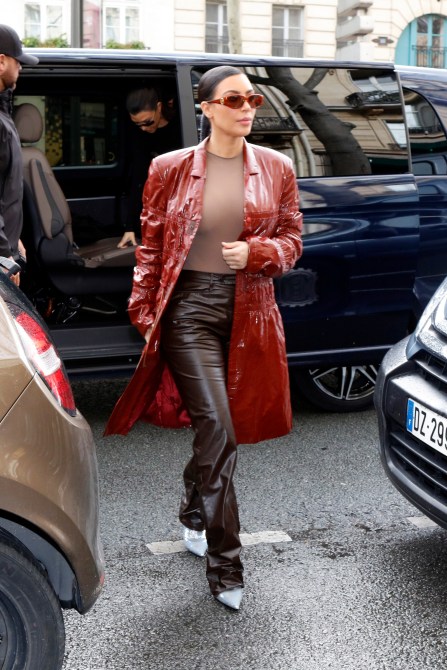 Kardashian rocked yet another full-leather look in March 2020. This getup is decidedly ’90s-inspired thanks to the long trench coat, super-pointy heels and colored sunnies. 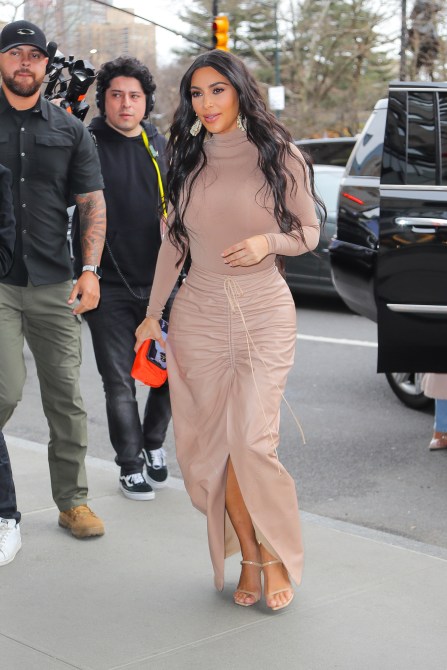 In February 2020, Kardashian was still rocking head-to-toe fitted neutrals for almost everything. 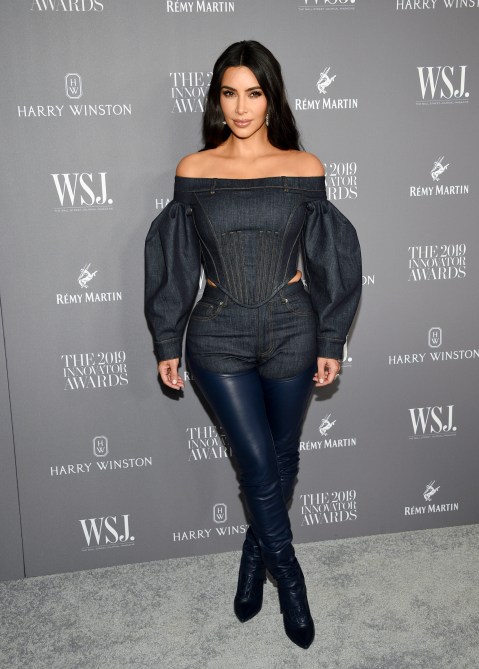 No one rocks denim-on-denim quite like Kardashian did in November 2019. This stunning Burberry look was one for the books. 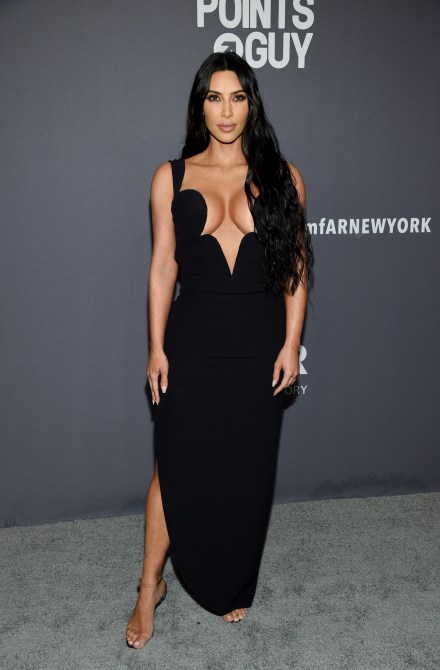 Kardashian sure wasn’t shy about cleavage when she rocked this stunning vintage Versace gown to the amfAR gala in New York City back in February 2019. 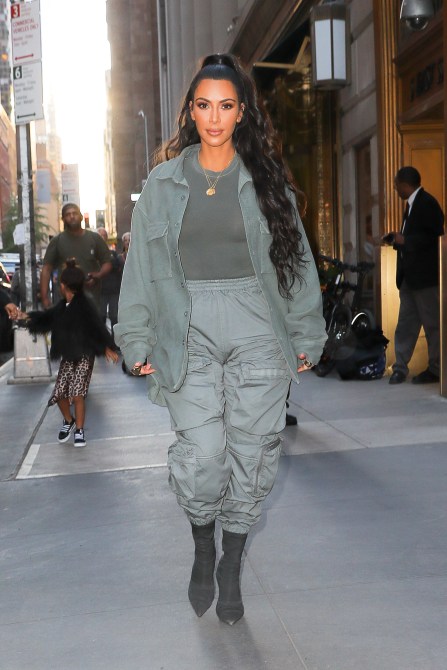 2018 was the peak of Kardashian’s love for monochromatic dressing, as evidenced by this all-over gray look from June of that year. 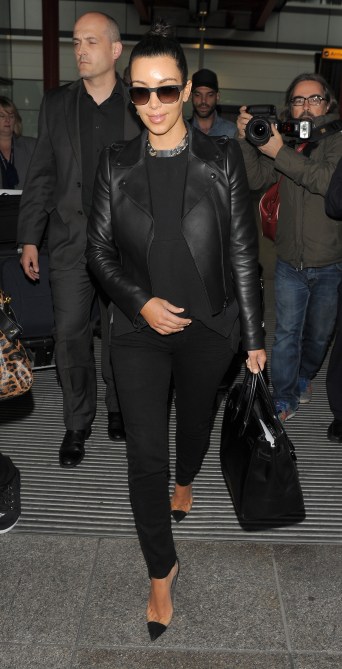 The year was 2012 and clean monochrome outfits were simply Kim’s thing! This skinny jeans-and-stilettos combo is a classic for travel days. 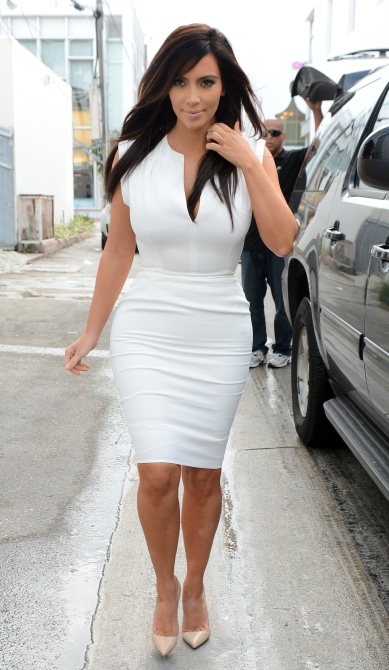 This outfit from 2012 is pure retro Kim Kardashian. The dress featured a body-hugging silhouette designed to show off her famous rump. 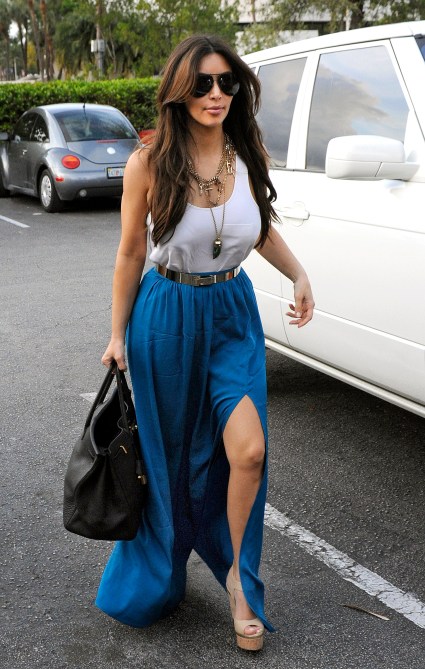 Never one to dress down, Kardashian rocked this maxi skirt with a pair of platform stilettos, a white tank and tons of jewelry back in 2012. At the time, this was a total vibe.

A version of this article was originally published in March 2016.