With 13 seasons of “Keeping Up With the Kardashians,” we should be used to Kim Kardashian West spilling tea left and right, but somehow the 36-year-old continues to make us shook. The reality star kept the tea scalding on a recent appearance on Andy Cohen’s “Watch What Happens Live,” where she touched on everything from her feud with Taylor Swift to her opinion on Kylie Jenner‘s ex-boyfriend, Tyga. (Spoiler alert: It wasn’t positive.)

While playing Plead the Fifth, a game in which celebrity guests can only refuse to answer one—often leading—question, Kardashian West forgot to invoke her Fifth Amendment right. Though after the game was over, the makeup mogul revealed there was one question she wished she side-stepped: Why did the Kardashian-Jenners split from their longtime stylist, Monica Rose? (As fans of the family know, the Kardashian-Jenners recently unfollowed Rose on all social media and are no longer associated with the stylist. Rose is known to have also styled Chrissy Teigen, Gigi Hadid and Chanel Iman, and to have worked with Khloe Kardashian for more than a decade.)

MORE: Kim Kardashian’s #PrayForManchester Post Is Not Appreciated by the Internet

After asking Cohen if she could hear the other questions before deciding what to plead the fifth on, Kardashian West gave in and revealed that she wanted a new vibe after marrying Kanye West, which is why she hired a new styling team.

“I haven’t worked with her in maybe four years, so my reason is not connected to this,” she said. “But I will say that I read that it was said that she was the reason for my makeover—my makeover when I met Kanye— and I will say that Kanye got me a new team and we kind of documented it. So I think people think that’s the reason, and for me, maybe that is the reason. I needed a new vibe.”

In typical celebrity fashion, the mom of two kept it political while hinting that there’s another (potentially more juicy) reason her sisters, particularly Khloe, Kylie and Kendall Jenner, ended their working relationship with Rose.

“You’d have to ask Khloe and Kendall and Kylie and the girls,” she said. 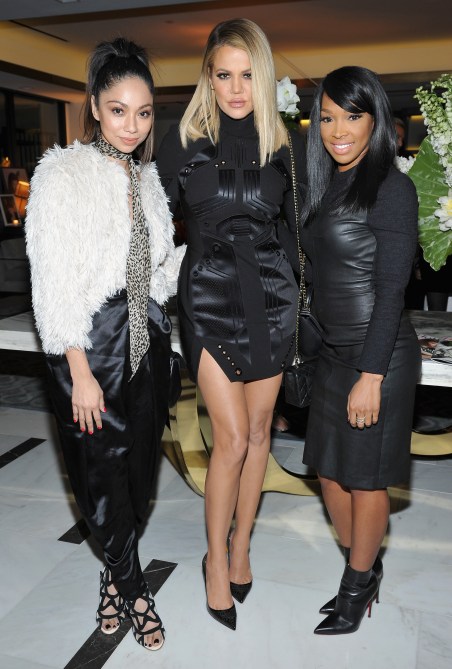 Also on the agenda was the E! star’s take on Kendall’s controversial Pepsi ad. Kardashian West explained that, because Kendall is “so sensitive,” she “would never mean for anyone to perceive anything in a negative way.” Kendall was brought up again when an audience member asked if things were awkward between Kendall and Swift after Kardashian West exposed the “Bad Blood” singer on Snapchat for allegedly lying about having never heard the lyrics to West’s “Famous” (in which he calls the singer a “bitch” and claims to have “made her famous”) before its release.

“I don’t know if Kendall was a part of [Swift’s] squad. I don’t think she was. I don’t think it was awkward,” she said before noting that she hasn’t been in contact with Swift since the Snapchat scandal.

The tea continued to spill with Kardashian West revealing her true opinion on Kylie and Tyga, who silently split in April.

“You know, I feel like [there was] a lot of drama, and it doesn’t mean he’s a bad person at all,” she said. “What was great was that it was so easy, that split. There has not been any drama with her since.”

On the topic of break ups, Kardashian West also opened up about her mom Kris Jenner’s divorce from Caitlyn Jenner. When asked about the chances of her parents reuniting, Kardashian West replied “2 percent. And those are Kendall and Kylie.”

As for her own very public split in 2013 from Kris Humphries, whom she divorced 72 days after their wedding, Kardashian West opened up about knowing the marriage was doomed from the start.

“I just thought, ‘Holy shit. I’m 30 years old, I better get this together. I better get married,” she said. “I think a lot of girls do go through that where they freak out thinking they’re getting old and have to figure it out, all their friends are having kids. It was more of that situation.”

With all the tea spilled, maybe Kim should brush up on the rules of Plead the Fifth before the next time she plays.

MORE: Kim Kardashian Is Fully Clothed and in Full Mom Mode in Her Most Liked Instagrams