We get it, Kim Kardashian: You’re a sexy mom. We understand. Entendemos. Nous comprenons. But it seems lately, the 33-year-old is doing everything in her power to make sure we don’t forget it. Case in point: The black cut-out jumpsuit she wore last night that literally had her boobs popping out.

Kim wore the revealing ensemble to an L.A. event hosted by Violet Grey founder Cassandra Huysentruyt, who were celebrating their Artist In Residence Donald Robertson—aka Instagram fashion illustration sensation Donald Drawbertson—who drew a special piece of art based on Kim’s image that was hung at the store.

Hey, we’re all for dressing how you want to and not confining yourself to society’s expectations of “mother” and “wife,” but we can’t help but wonder why Kim feels the need to show her breasts almost every time she steps out.

Back in October, we speculated as to whether Kanye (Kim’s seeming style puppeteer) is overly-sexualizing his then-girlfriend, who—as self-involved as she was before she met him—used to only post harmless selfies of her overly-made-up face, fake lashes, and bandage dresses, rather than alarmingly sexual photos in skimpy white swimsuits and low-cut outfits that basically showcase both breasts.

MORE: Naya Rivera’s Boobs are Suddenly Huge: Did She Get Implants?

It could be her way of dealing with her body—she’s made several pointed comments lately that she’s not happy with it—or her way of getting headlines (hey, it’s working!) Though it seems odd that someone so admittedly uncomfortable with her body—and someone so visible—would dress the way she does. 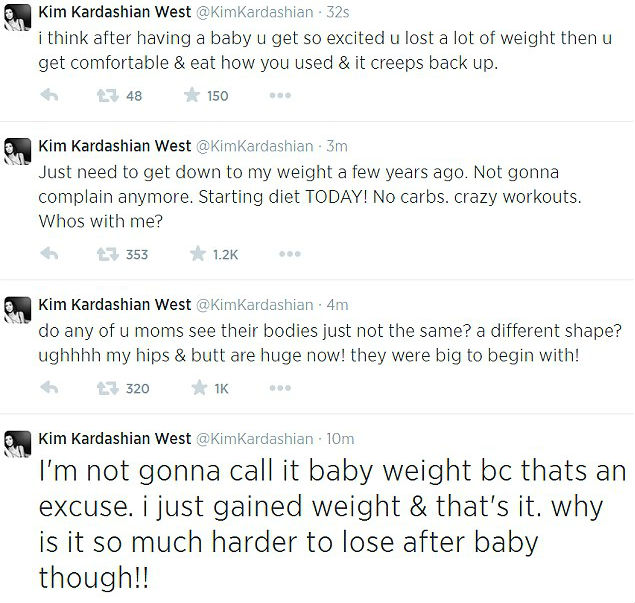 Part of Kim’s odd Twitter rant about her weight.

Supermodel Rosie Huntington-Whiteley was also in attendance and certainly didn’t the feel to show skin, in a swingy long-sleeved dress and lace-up boots. Granted, she’s six feet tall, so Kim clearly is doing what works for her body—showing it off.

What do you think of Kim’s revealing jumpsuit?  Weigh in!