Kim Kardashian‘s got a league of doppelgangers walking around the world, but this time it looks like it’s her husband Kanye West‘s turn to boast his own mini-me: his 1-year-old son, Saint West. Yup. The power couple’s baby boy is a dead ringer for his dad—and once you view Kim’s new picture of him, you’ll see the resemblance, too.

MORE: Here’s How to Get a ‘Cute’ and ‘Shorter’ Nose, According to Kim Kardashian

Yesterday, the “Keeping Up with the Kardashians” star updated us on her life (as she normally does) with an adorable photo of her toddler son on Snapchat. The snap was a typical proud mama post: Saint, dressed in a bright yellow and black sweater, sat in his carseat with a “Paw Patrol” water bottle ready for quenching. 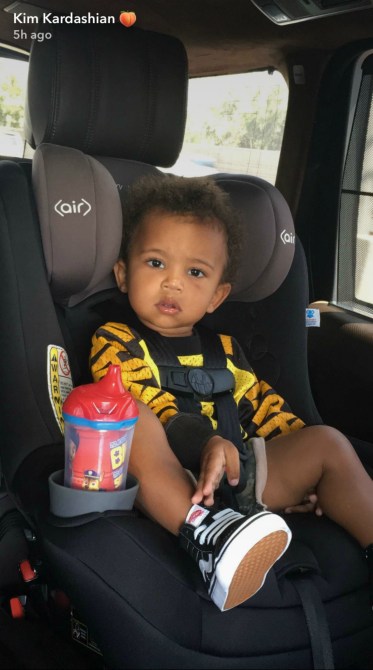 What caught our attention was Saint’s blank stare to his mom as she snapped a photo of him. As Kanye fans know, this is the same point-blank gaze the rapper gives to paparazzi to intimidate them from taking his picture (Seems like Saint’s learning something at home.) 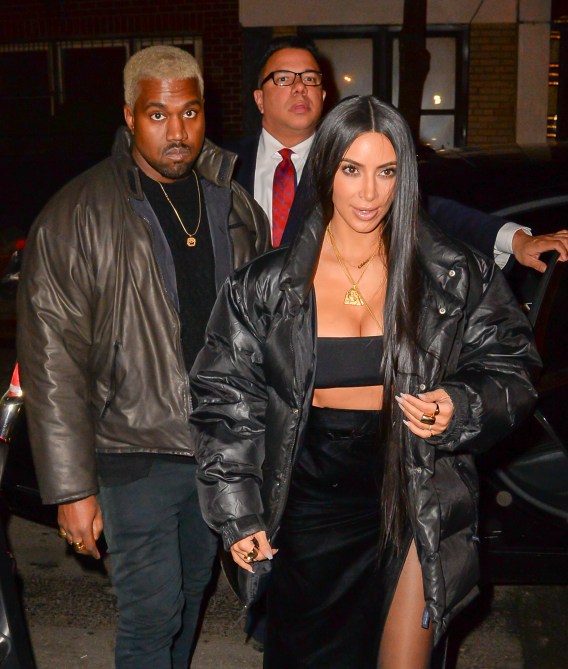 Apparently, a distaste for unauthorized pictures runs in the family. Kim and Kanye’s daughter, North, is also prone to shutting the paparazzi down for taking her pic. Looks like the selfie gene hasn’t hit North or Saint yet, but luckily for them, they have a mom who knows a thing or two about posing for the camera.

As “KUWTK” fans were fawning over Saint’s Kanye-esque looks, Kim was also battling mommy-shamers. Though the cute snap seemed harmless to the naked eye (and to those who weren’t up-to-date with the latest parenting laws), the mom-of-two was apparently going against the law with how she put Saint in his car seat.

If you’re confused, we’ll break it down for you: According to California state law, children under 2 years old (Saint is 1) are required to sit in rear-facing car seats. (In Kim’s snap, the toddler is sitting face-front.)

While it was unclear if Kim and Saint were in California at the time of the pic, that didn’t stop the Internet from coming down hard on the E! star for her poor parenting choice.

“He is so cute, let’s protect this handsome boy by making sure [he] is rear-facing,” one person wrote.

“Sorry but he too little to be facing us!” another commented.

“It’s illegal to have a child facing forward in California that is less than 2 years old. Please turn his car seat around, it’s not too late!” a user added.

Of course, Kim’s fans weren’t going to stand by idly and just let their queen get mommy-shamed. As the shaming happened, dozens of Kim supporters lashed out at the mommy-shamers for their unrequested policing.

“I see the car seat police are on a mission! Typical putting their nose and opinion in when it wasn’t asked,” one said.

“Oh no watch out here comes the car seat police to try and lecture you on how to put your child in a car seat,” another commented.

“Didn’t realize so many people had degrees in car seat positioning,” a user sassed.

Though we’re no experts on parenting or car laws, it’s safe to assume California has its rear-facing car seat law for a reason. Still, when it comes to Kim and random Internet opinions, we think Kim likely knows best for her own child.