When we were kids, we all had that dream where princesses would show up to our birthday parties and sip tea, right? Or maybe our favorite athletes would make an appearance and we would *casually* toss around a football while eating some birthday cake. Whatever the dream was, we’re pretty sure no one could have imagined this odd-but-total-all-star crew showing up to our birthdays. These Kim Kardashian, Kayne West, Pete Davidson and Timothée Chalamet party photos from Kid Cudi’s 35th birthday celebration are giving us major FOMO.

Chalamet is a big self-proclaimed fan of Kid Cudi, but now it appears the two men have gotten extremely close! Close enough, that is, to have a private meal together with three of the rapper’s other friends. The fabulous five were having dinner at Nobu in Malibu Wednesday night, and Kardashian took the opportunity to snap a few pics of the men. “Happy birthday @KidCudi” the reality star tweeted.

She garnered a lot of replies, most of which were from fans commenting on how eclectic the group was. One Twitter user replied, “Is it just me, or did no one else expect these four people to be in the same room together?”

Another joked, “i’m pretty sure it’s a glitch in the simulation”

It was just one year ago that Chalamet had not yet met his idol. Two months later, on March 26, he flipped out after the Grammy-award-winning musician called him out on Twitter, writing that the Call Me By Your Name actor was his favorite artist. “Who’s your favorite artist right now” a fan asked the rapper. “@RealChalemet,” Cudi replied.

Chalamet—understandably—nearly lost his mind. “UHMMM OKAY STRIKE ME THE FUCK DOWN,” Chalamet quickly wrote back.

Talk about a 10 year glow-up!  There’s no way young Chalamet would ever have imagined having a chill dinner with his favorite rapper at one of Malibu’s hottest restaurants. 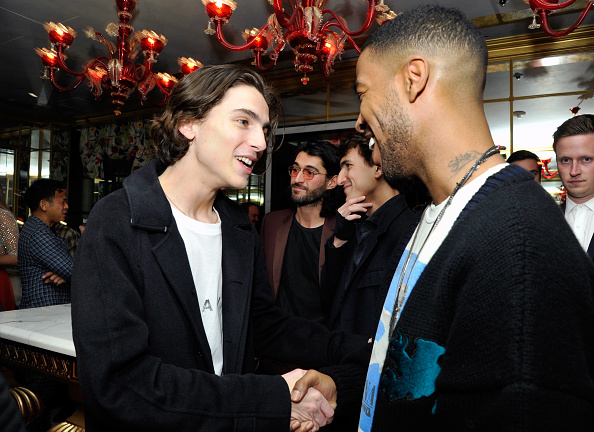 Perhaps more surprising than Chalemet’s invite was Pete Davidson’s presence at the birthday dinner. The Saturday Night Live cast member and Kayne West were not on great terms a few months ago after Davidson made fun of the rapper during the “Weekend Update” segment on October 3, 2018. West made an appearance as the show’s musical guest during the season premiere hosted by Adam Driver. Then, one week later, Davidson talked to Colin Jost about West’s off-air pro-Trump ramblings.

“What Kanye said after we went off the air last week was one of the worst, most awkward things I’ve ever seen here,” Davidson said. “And I’ve seen Chevy Chase speak to an intern.”

He then discussed the MAGA hat that West wore during the show’s bows.  “He wore it all week,” Davidson said, adding that no one had pressured West into take off the hat. “I wish I’d bullied you,” Davidson joked. “I wish I’d suggested that it might upset some people, like your wife or every black person ever.”

“Kayne is a genius. But like a musical genius,” Davidson said “But like Kanye, I know you’re like, “Yo, this is the real me. I’m off the meds.” …. Take ’em! There’s no shame in the medicine game. Being mentally ill is not an excuse to act like a jackass.”

Well, it seems like all is forgiven—or at least was temporarily set aside—so the gang could celebrate Kid Cudi’s birthday. They did seem to all be sharing some laughs! We’d love to know what was so funny. Maybe they were watching a different one of Davidson’s “Weekend Update” bits!