Double trouble. Kim Kardashian’s response to Kanye West and Chaney Jones‘ relationship proves that the Keeping Up with the Kardashians star is officially over it when it comes to her estranged husband’s bizarre jealously tactics.

Kanye, who now goes by “Ye,” reportedly started dating Instagram model Chaney, 24, in February 2022 following his split from Uncut Gems actress, Julia Fox. Ever since the model began joining Ye at events—including his DONDA 2 listening party in Miami, Florida—the world couldn’t help but notice that she bears a striking resemblance to the rapper’s estranged wife. So much so, Chaney has been dubbed a Kim Kardashian look-alike, as fans and the media continue to point out the outfits, accessories, hairstyles and more that appear to be nearly identical to styles Kim has worn in the past. So, what does Kim make of her ex dating her doppelgänger?

According to a source who spoke to Hollywood Life, the SKIMS founder, 41, couldn’t care less if Kanye, 44, wants to date her look-alike. “Kim has seen photos of Chaney and she thinks that Chaney should just be herself and not try to imitate her,” the insider shared with the site on March 1, 2022. “But, if that is what Chaney wants to do to get the attention she is seeking, or win over Kanye, so be it. Kim’s focus right now is herself, her children, and her relationship with Pete,” the source added, referring to Kim’s boyfriend, Pete Davidson. The reality star started dating the Saturday Night Live comedian, 28, in October 2021, months after filing for divorce from Kanye earlier that year. 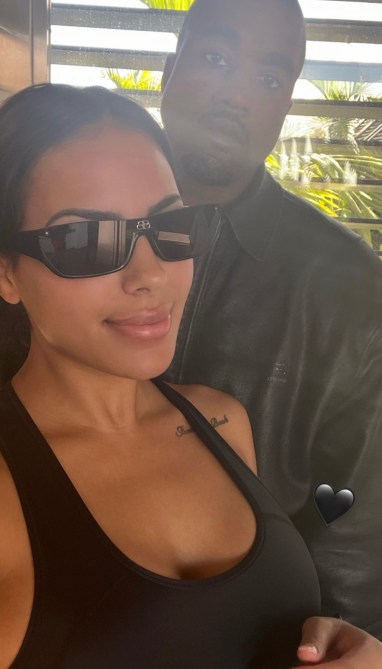 While Kim finds it somewhat “flattering” that so many women try to copy her, a second source claims that she does find it bizarre that Ye keeps trying to date women who look like her. “Kim knows that she’s considered a fashion icon, so the fact that so many women, including Chaney, try to emulate her is really quite flattering to Kim,” the second insider said, adding, “Does Kim think it’s a little peculiar that Kanye has dated a few women now that resemble her? Yeah, she does. Most women in Kim’s situation would probably feel the same way. But as far as her feelings go, Kim doesn’t have the time or energy to concern herself with who Kanye is spending time with.”

At the end of the day, however, Kim is mostly focused on making sure her co-parenting relationship can remain amicable for the sake of their kids. The former couple, who tied the knot in 2014 after three years of dating, share four children together: daughters North, 8, and Chicago, 4, along with sons Saint, 6, and Psalm, 2.

“As it pertains to who he gets involved with and who he dates, she just wants that person to be a good person because if anything ever transpires from this, that woman will then be a part of Kim’s life,” a third source chimed in. “So, ultimately, Kim is hoping for the best no matter how much the person Kanye dates looks like, or doesn’t look like, her.”

The source continued, “Their kids are the only things that matter to Kim, so if any relationship for Kanye leads to him being happy and to have him be one with his family obligations, Kim thinks that is the best way to go. More power to them all.”