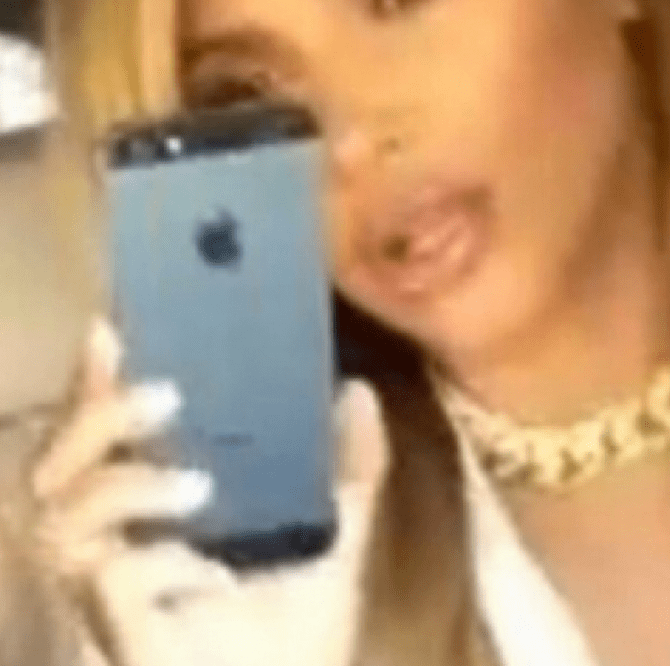 Late last night, Kim Kardashian took to Instagram to post a selfie. Why is this surprising? Well, it’s not, considering she is the captain of the celebrity varsity selfie team. However, this time, it was totally blurry and not particularly flattering. Multiple outlets are reporting that the 32-year-old mom of North West blurred out the photo since she was carrying the unreleased iPhone 5S—which was just announced today.

Obviously, Kardashian isn’t the most humble lady in the world and probably wanted to show off her new toy, but that’s besides the point. We have a few burning questions for the reality starlet about this doozy of a selfie:

1. Girl, where did you get this?
We all know Kardashian’s beau Kanye West loves Apple products, hence why she gave him a Father’s Day gift that consisted of a mouse signed by Steve Jobs and another by his Apple co-founder Steve Wozniak, who reportedly visited her in the delivery room. Did she really just ask them for an unreleased phone, or do they love her that much? Ugh.

2. Is the blonde here to stay?
When we saw paparazzi shots of Kardashian’s chunky highlights, we were convinced that she’d fully morphed into a 1990s mom. Then we thought it was another one of her hair publicity stunts, and that she’d be back to brunette by dinnertime. Alas, it’s been a week now—and we need to know: Is this a semi-permanent decision?

3. Honestly, why is this so blurry?
Shouldn’t she be showing off the good quality of the new camera, and not using a filter that makes her look like an alien in lipliner? We’re sure Wozniak is thrilled with this endorsement.

4. Is the Kim Kardashian-BlackBerry love affair officially done?
For years, KK preached the gospel of the BlackBerry—but we haven’t seen her tote one around in awhile. It would truly be upsetting if this ended, as this was her longest relationship, far extending beyond her first two marriages combined. Hey, if Kanye loves an iPhone, that means Kim loves an iPhone.

5. What is this manicure?
We aren’t willing to accept the fact that the super-long French manicure is back. What’s next, the return of the Juicy tracksuit?