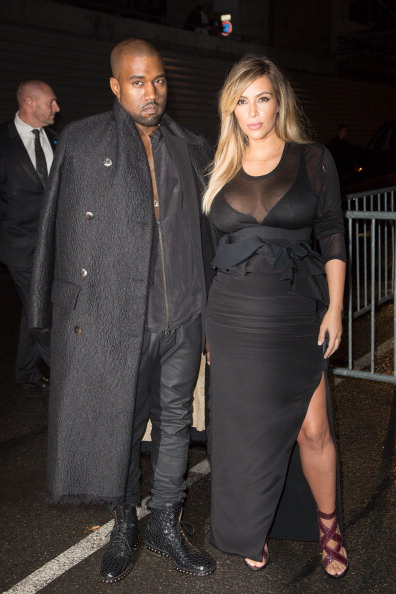 If you told us a year or so ago that Kim Kardashian—she of the E! and Trimspa fame—would be treated as royalty during Paris Fashion Week, we probably would have laughed in your face and told you to go dash to your local Sears to check out the Kardashian Kollection. But alas, it’s happening, as the new (very blonde) mom joined North West‘s daddy (and fervent high-fashion enthusiast) Kanye West at the Givenchy show, where they both sat front-row and wore brooding (and boob-baring) black. (Kanye even took a cue from the hoards of fashion girls and rocked the ubiquitous over-the-shoulder coat drape. Timely!)

While we know Kim’s man is largely responsible for her sort-of puzzling fashion ascension, it seems some members of the fashion in-crowd are totally willing to associate themselves with the reality star.

Case in point: Former French Vogue editor and current CR Fashion Book honcho Carine Roitfeld, who styled Kim’s slinky Givenchy outfit for the show, and apparently hung out with the headline-making couple throughout Paris. (You might recall Kim’s very pregnant, grillz-wearing turn on CR’s cover, so clearly the two hit it off.)

Naturally, Kim also took to social media to gush about Givenchy creative director (and Kanye’s soulmate) Riccardo Tisci for hooking her up with clothes to wear to the show, and proclaiming her apparent lifelong allegiance to the French label.

Thank you Ricky for making this for me the day before the show. I die for you. #Givenchy4lifebaby 🇫🇷 http://t.co/EYBg8pxxpd

What do you think of Kim’s first big post-baby outing at Givenchy? Let us know!