Bringing family together. Kim Kardashian gave a great Father’s Day tribute to her ex-husband Kanye West. The SKKN founder made a touching Instagram story as part of her Father’s Day celebrations.

She posted two photos of Kanye and their kids, North, Saint, Chicago and Psalm on her Instagram story on June 19, 2022. “Thank you for being the best dad to our babies and loving them the way you do!” she wrote. “Happy Father’s Day Ye.” Kanye and Kim were spotted at their daughter North’s basketball game just days earlier on June 17, 2022, according to TMZ. A source said that the former couple “looked like they were just trying to lay low” while trying to be supportive of North’s game.

News of the two being supportive co-parents come after a series of events where Kanye slandered Kim’s new boyfriend, Pete Davidson. In February 2022,  Kanye posted a screenshot of a conversation with Pete on his Instagram where he claimed that he would never let Pete meet his kids. “I do hope [one] day I can meet them and [we can] all be friends,” wrote the SNL star. “NO YOU WILL NEVER MEET MY CHILDREN,” Kanye wrote in the caption of his now-deleted Instagram post. Pete was consistently a target of Kanye’s threatening Instagram posts in early 2022 , but the DONDA rapper has since kept quiet about Pete. 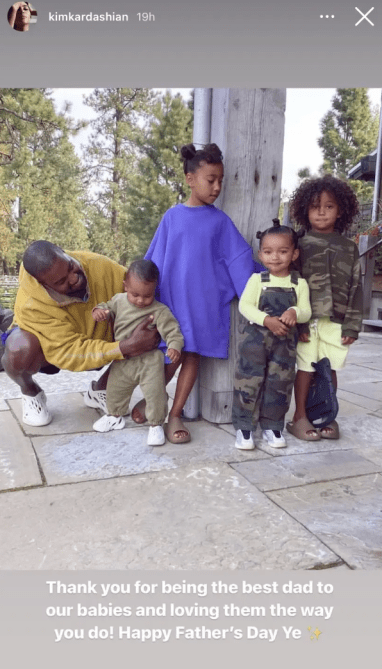 Despite Kanye’s protests, Pete seems to be getting along with Kim’s kids. A source close to the couple told HollywoodLife on May 13, 2022, “Seeing Pete with her children has shown her what an amazing father he would be, and Pete has gotten close to North.” The insider continued, “They play together often because Pete is like a big kid and Kim loves to see this.”

Kim dished on her relationship to Pete on Hulu’s The Kardashians. The Skims founder recalled how she approached Pete after she hosted an episode of Saturday Night Live in 2021. I called the producer at SNL and was like, ‘Hey, do you have Pete’s number? And they were like, ‘Yeah.’ I text him. I wasn’t even thinking like, ‘Oh my God, I’m gonna be in a relationship with him.’ I was just thinking, ‘Heard about this BDE, need to get out there, I need to jumpstart my…’” Kim told the cameras with a smile, “I was just basically DTF.”