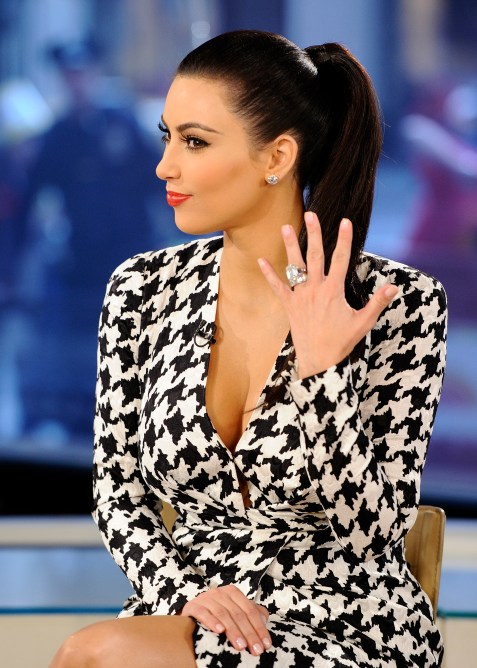 We guess Kris Humphries has finally moved on from his acrimonious split with his ex-wife Kim Kardashian, who notoriously filed for divorce after a whopping 72 days of marriage. The 28-year-old NBA star is auctioning off a major piece of jewelry he once gave his blushing bride: Her massive 20-carat Lorraine Schwartz diamond engagement ring (see above).

According to Us Weekly, the ring is on the docket for the October 15 sale at Christie’s auction house in New York. It obviously does not explicitly state who the owner is, but Christie’s confirmed that a custom Lorraine Schwartz ring featuring a 16.21-carat center stone and two 1.80-carat stones on the side is indeed for sale.

The seller is described as a “gentleman.” Well, given the way Humphries was portrayed on “Kourtney and Kim Take New York,” we wouldn’t go as far to call him a gentleman—but perhaps we’re just blinded by the genius of Kris Jenner‘s editing and spin.

A source told the mag that Kardashian has always known this fateful day would come. “Kim has been waiting for the day he would auction it. Everyone always asked what Kim did with the ring—she silently gave it back over a year ago! And Kris waited until the divorce was final to sell it.” It’s expected to fetch between $300,000 and $500,000 at the auction, a far cry from the $2 million it was reportedly worth when he popped the question back in 2011.

Congratulations to the duo on finally moving on—although it seems Kardashian did so faster than he did, because she’s currently nursing her baby that she has with boyfriend Kanye West. Onwards and upwards!