For those who don’t know, TMZ reported on Friday, February 19, Kim had filed for divorce from her husband, Kanye West, after almost seven years of marriage. The couple—who married in 2014 after three years of dating—share four kids: daughters North, 7, and Chicago, 2, and sons Saint, 5, and Psalm, 1. Page Six reported in January 2021 that Kim hired celebrity attorney Laura Wasser to represent her in her divorce from Kanye. “They are keeping it low-key but they are done,” the insider said. “Kim has hired Laura Wasser and they are in settlement talks.”

A source also told Us Weekly at the time that Kim and Wasser have been working since the summer of 2020. “Laura Wasser has been on retainer and actively working for Kim since last summer,” the insider said. Kim has also worked with Wasser before. According to Us Weekly, the attorney was Kim’s representative in her divorce from her second husband, Kris Humphries, in 2011. The two split after 72 days of marriage but finalized their divorce in 2013.

It’s unclear what Kim and Kanye’s divorce will look like, but according to Page Six, are in negotiations over their multi-million-dollar home in Calabasas, California. The couple bought the mansion for $40 million but have since spent another $20 million in renovations. “Kim is trying to get Kanye to turn over the Calabasas house to her, because that’s where the kids are based and growing up. That is their home,” Page Six’s source said. “She owns all the land and adjoining lots around the house but Kanye owns the actual house. They’ve both put a lot of money into renovating it.”

According to a 2014 report by Radar Online, Kim and Kanye also have a prenup. The site reported at the time that the couple signed a prenuptial agreement two months before their wedding in May 2014. According to Radar Online, the prenup states that Kim will receive $1 million for each year she’s married to Kanye, with a cap of $10 million. The site also reported that, under the prenup, Kim will be a beneficiary under Kanye’s life insurance (which was valued at $20 million at the time) for life, even if the two divorce. Radar Online also claimed at the time that the two did not include a custody clause in their prenup. A source for E! News, on the other hand, denied the details of the prenup, telling the outlet, “Whether or not Kim and Kanye have a prenup is a private matter and any speculation is just that.”

But back to Kim’s divorce lawyer: Laura Wasser. Read on for what we know about her and what she thinks of Laura Dern’s character in Marriage Story. 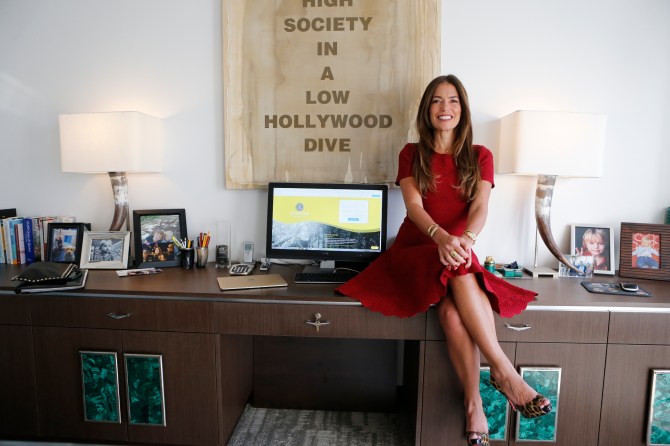 Who are Laura Wasser’s other clients?

Wasser, who has been divorced and has two kids, has a vast celebrity clientele. Her past clients include Angelina Jolie, Ryan Reynolds, Kelly Clarkson, Christina Aguilera, Ashton Kutcher, Johnny Depp, Britney Spears Gwen Stefani and Heidi Klum. According to The Sun, Clarkson replaced her previous attorney with Wasser in July 2020 amid her divorce case with husband Brandon Blackstock. The Sun also reported that Wasser has the nickname “Disso Queen” for her long list of A-list clients. Wasser also represented Jolie in her divorce from Brad Pitt.

What does Laura Wasser think of Marriage Story?

Though it hasn’t been confirmed, it’s widely believed that Laura Dern’s character in Marriage Story is inspired by Wasser. In the movie, Dern plays divorce lawyer Nora Fanshaw, who represents Scarlett Johansson’s Nicole Barber in her divorce. In an interview with Vulture in 2019, Wasser responded to speculation that Nora is based on her. There have been many people who have called and said, ‘Did you see it? Is that your office? That looks like your office. Do you think that was supposed to be you?’ And I’m like, ‘I don’t know,’” she said.

Wasser also confirmed that Marriage Story director Noah Baumbach filmed some of Dern’s scenes in her office, which led to theories that the character is based on her. As for if she thinks Nora is based on her, Wasser didn’t confirm or deny the speculation. “Maybe. [Pauses] I mean … maybe. I don’t know. It’s very hard to see oneself that way, but because of the amount of people that have called and texted me about it, I can’t completely ignore that that may be the case,” she said.

She did, however, like Laura Dern’s performance of her. (Dern went on to win an Oscar for her role as Nora.) “I love Laura Dern. I love her as an actor, and I love her as a person,” Wasser said. “I thought she was portraying a satirical family-law attorney. I thought, more than anything else, that she served as a good character in a cautionary tale: If you don’t want to end up like these people, and have somebody like this representing your spouse, you ought to really think carefully about how you embark upon the road to divorce.”