The Kardashian men always seem to one-up each other with birthday gifts. Earlier this summer, Tristan Thompson filled Kylie Jenner’s first floor with red roses. Well, Kanye West just donated $1 million to charity for Kim Kardashian. Wowza! Roses are nice but this is a very powerful gift, and it’s going to make a difference in more lives than one.

Kardashian spent her birthday weekend with friends in Palm Springs. She, too, received a full room of flowers on her actual birthday. She also had a churro stand and a food truck outside for some delicious dessert. Dessert in the desert, gotta love it. Kardashian’s children made their mom birthday cards and brought the reality star breakfast in bed. She shared a shot of some delicious looking pancakes that spelled the word, “Mom.” But the churro wasn’t the main hit. Neither were the cards—as sweet ass they were. Kardashian’s rapper husband donated $1 million in Kardashian’s name. Kanye listed his four kids, North, Saint, Chicago, and Psalm West, on the donation as well. The donation was made to four criminal justice reform charities—Cut 50, Buried Alive Project, Equal Justice Initiative , and Anti-Recidivism Coalition.

Kardashian has been very politically active and criminal justice reform is her main cause. In fact, Kardashian is looking into becoming a lawyer as a result of her engagement and her work to help free Alice Marie Johnson. 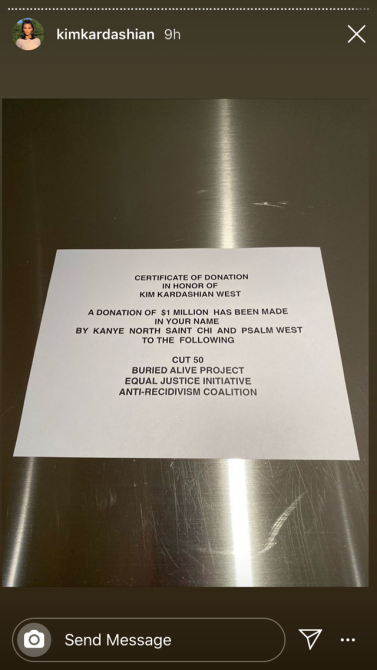 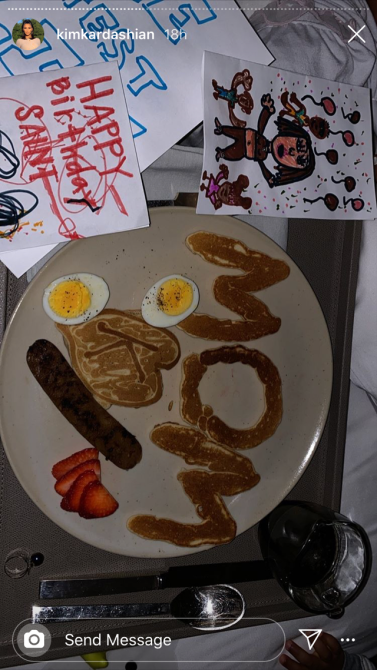 “The White House called me to advise to help change the system of clemency, and I’m sitting in the Roosevelt Room with, like, a judge who had sentenced criminals and a lot of really powerful people and I just sat there, like, Oh, shit. I need to know more,” she said. “I would say what I had to say, about the human side and why this is so unfair. But I had attorneys with me who could back that up with all the facts of the case. It’s never one person who gets things done; it’s always a collective of people, and I’ve always known my role, but I just felt like I wanted to be able to fight for people who have paid their dues to society. I just felt like the system could be so different, and I wanted to fight to fix it, and if I knew more, I could do more.”