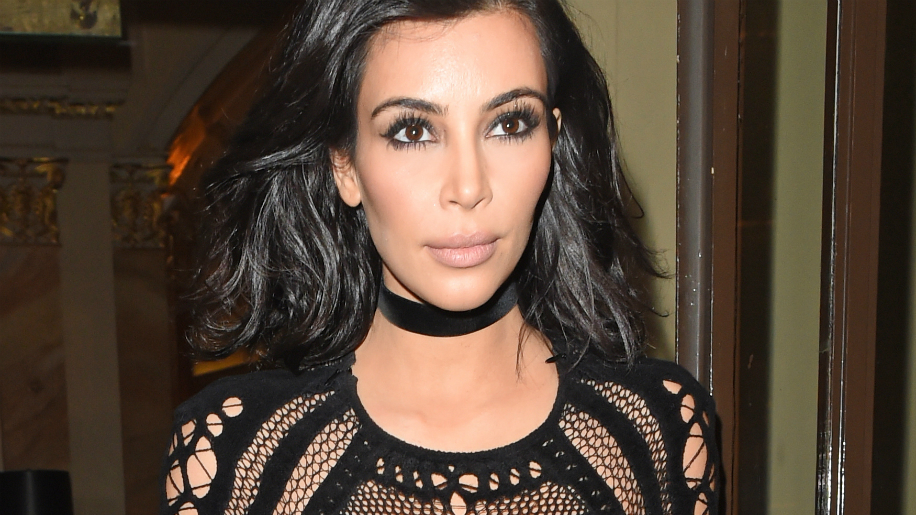 Although perhaps not quite as epic as last year when Vogue covers and European weddings were her main activities, these past 12 months have been pretty eventful for Kim Kardashian.

And while, yes, she’s been ever-so-slightly nudged out of the limelight’s nucleus by her little half-sis Kylie Jenner, Kim’s still right where husband Kanye West thinks she deserves to be: on top of the world. In honor of the reality star’s 35th birthday, here’s a month-by-month look at Kim’s eventful year.

Breaks the Internet.
Mere days after Kim’s 34th birthday, Paper magazine claimed it wanted to “break the Internet” with its Kim Kardashian cover and set out to do it the good old-fashioned way—with a photo of her very shiny, very ample, naked ass, followed by full-frontal images.

Bags a Balmain campaign.
It is a very merry December indeed for Kim: She is named the face of Balmain’s Spring 2015 ad campaign alongside Kanye; the pair pose on the hoods of cars and make out. 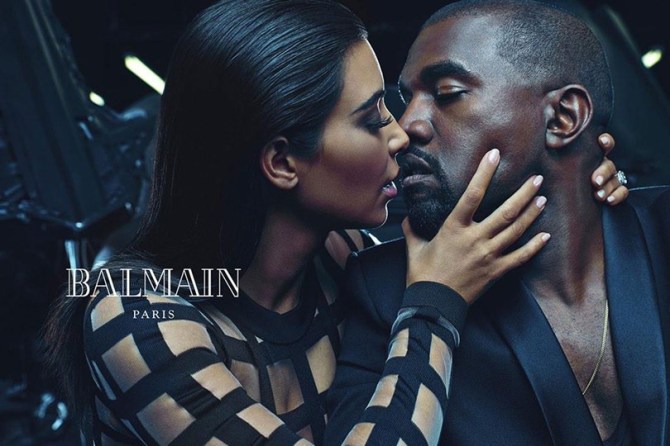 Decides to wear a fur bikini in the snow.
Kim and Kanye go skiing—matching outfits are naturally involved—and then Kanye decides it would be a killer idea to take photos of Kim traipsing through the snow in a fur bikini and fur boots. Everyone subsequently questions Kim’s ability to make life choices, while simultaneously wondering if they could pull off a fur bikini.

Sits next to Anna and Bey at NYFW.
After attending the Grammys (or, as Kim dubs it on Instagram, “#WifeLife”), Kimye heads to New York Fashion Week for Kanye’s big debut for Adidas. Kim sits front row beside Beyoncé and Anna Wintour, while holding daughter North, who cries hysterically through most of the presentation. 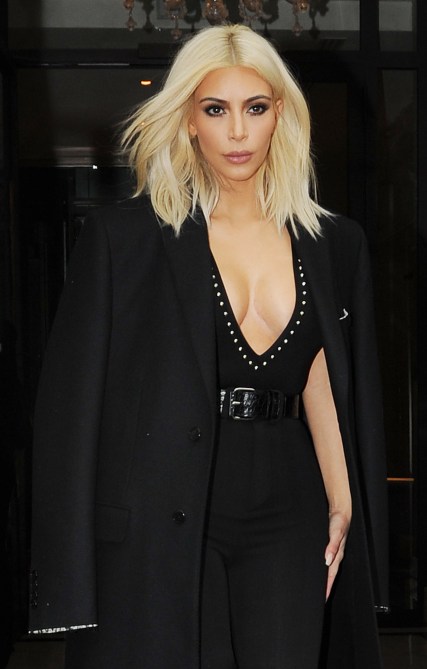 Goes platinum—for about a week.
The Boston Marathon bomber trial begins, Hillary Clinton publicly addresses her use of a personal email account during her time as Secretary of State, and—most importantly—Kim goes platinum blond!

Reaches a very important milestone.
That same month, she hits the milestone of 30 million Twitter followers, and Kanye celebrates as any husband would—by posting naked photos of his wife on Twitter, captioning one “I’m so lucky.”

Becomes a published author.
In April, Kim debuts Selfish, a 445-page book of selfies. You’d think she had somehow penned the next War and Peace for the amount of advance press surrounding the release of the diminutive book—deliberately selfie size at five inches by seven inches—but according to a August report, the PR efforts weren’t exactly effective: Reps for Nielsen Bookscan told Radar Online that Selfish had sold only 32,000 copies.

Lands Time magazine.
That same month, Kim and Kanye are named to Time magazine’s list of the 100 most influential people. After the gala honoring the recipients, the pair recover from Amy Schumer’s prank by going to dinner with fellow influencers Elon Musk and Hosain Rahman. 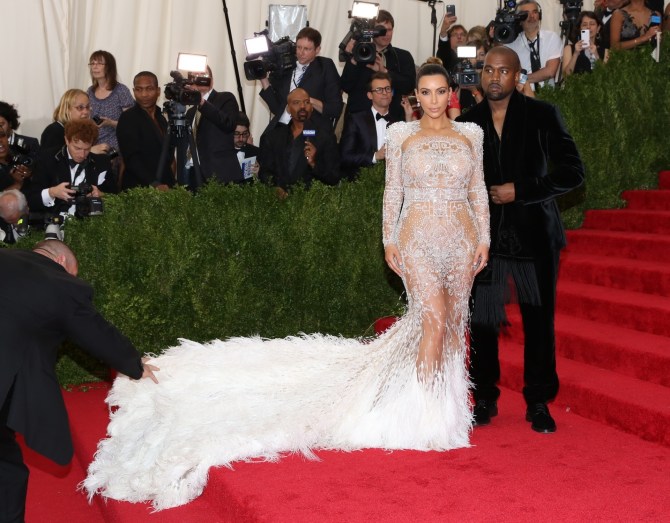 Cochairs the Met Gala.
It’s Kim’s third time at the Met Gala (she has Kanye to thank for that), and she shows up to the party of the year in a Roberto Cavalli dress that screams déjà vu to pretty much everyone. Still, she’s half-naked in it and makes Vogue’s Best Dressed List, so … win?

Reveals she’s pregnant with Kanye’s second spawn.
During May’s mid-season finale of Keeping Up with the Kardashians, we learn that Kim is expecting baby number two with husband Kanye West. In scenes teasing the second half of the reality show’s season, the 34-year-old says, “I just got the blood test back, and I am pregnant!” And—because, well, look who we’re talking about—Kim also teases the news on Twitter before the episode actually airs.

Becomes a women’s scholar.
In June, it is announced that Kim is set to give a public lecture about the objectification of women in the media called “Kim Kardashian West Live!” at the 3,000-seat Paramount Theatre in Oakland, California. The event is billed as a “lecture/seminar” in which the reality TV star can discuss how she “monetized” everything from taking selfies to sexuality.

Announces she’s having a son.
Kim confirms rumors that she and Kanye are having a boy with an Instagram snap posted on Father’s Day, captioned: “Precious moments like this when we were traveling on tour with you are what I live for. You’re such a good daddy to North & you will be the best daddy to our new son too!” 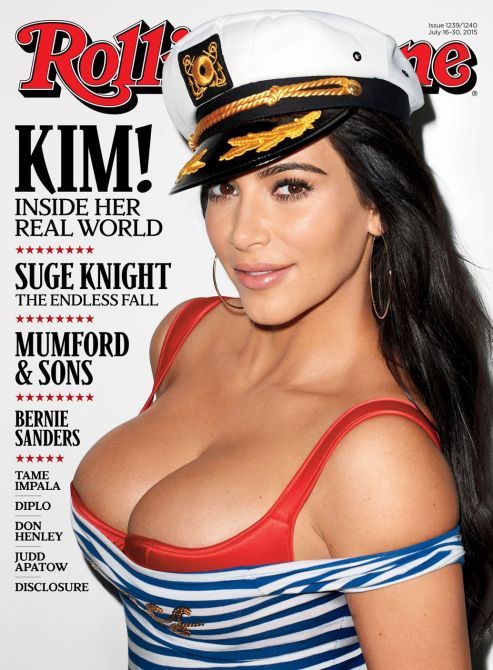 Her boobs cover Rolling Stone.
The magazine features the reality star posing in a busty, nautical-theme outfit accessorized with a sailor’s hat and oversize hoop earrings. In the story, she says she believes she’s “so much smarter than [she’s] portrayed.”

Becomes a muse to top makeup artists and hairstylists.
This summer, we chatted with hair guru Guido Palau, Redken’s creative consultant, who told us he doesn’t count Kim out when designing runway looks. “Kim Kardashian is real. That’s what girls look like today. It’s a very huge, cultural part of what is going on … Kim Kardashian is how loads of women want to look,” he said. Makeup artist Sir John agreed: “In every generation, there’s a situation where we have someone who takes the spotlight of what glamour is,” he said, citing Kim as a throwback to bombshells like Sophia Loren.

Surpasses Beyoncé on Instagram.
Dedicating your entire life to Instagram really can pay off, kids: On August 24, reality star Kim Kardashian surpasses singer, songwriter, dancer, actress, businessperson, activist, and designer Beyoncé as the most-followed person on the social media platform with 44,005,604 people tracking her every selfie. Just to give that some context, it’s double the population of Australia, the world’s 12th biggest economy. Granted, Bey isn’t terribly far behind with 43,935,648 followers, but it certainly says a great deal about the state of pop culture and entertainment that Kim—and three of her siblings—bagged spots on Instagram’s Top 10 list. 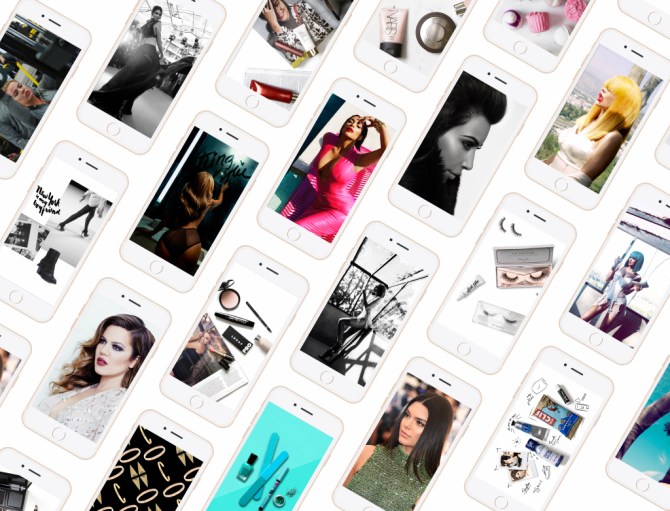 Instagram is for plebs; personal apps are for superstars. (Photo: Whalerock Industries)

Launches her own personal app.
Video games are so last year, folks. In September, Kim debuts a personal media app that allows her to “connect more directly with fans.” So far, that means getting a tutorial on how to steal North’s style, getting a lesson in contouring, and watching a diary about Kim’s pregnancy. You might be rolling your eyes, but Kim is laughing all the way to the bank: The app comes with a seven day free trial, but after that it’s $3 per month. Granted, Kim’s app didn’t generate nearly as much interest as Kylie’s—the latter’s app brought in $134,000, according to Apptopia from September, and Kim’s snagged only $19,000—but, hey, do you have your own app?

Takes a selfie with Hillary.
Kim and Hillary Clinton take a selfie, and the Internet can’t handle it. In August, the reality star posts the photo to Instagram shortly after the first GOP debate wraps up, captioning the picture: “I got my selfie!!! I really loved hearing her speak & hearing her goals for our country! #HillaryForPresident.” Never mind that before moving with the Hollywood and fashion crowds, Kim supported Republican candidates, as did her parents.

Rocks some pretty sweet sandal-boot hybrids.
Designed by her hubby.

Teaches Ellen how to selfie.
Appears on the Ellen DeGeneres Show to teach the host how to take selfies the right way—and admits Kanye didn’t discuss his plans to run for president in 2020 with her.

Here’s to another prosperous year ahead, Kim!