Just last week Khloé Kardashian publicly discussed her Valentine’s Day plans that notably left boyfriend Tristan Thompson out. At the time, she had us wondering if this meant a split between the pair was imminent. Now fans are delving into the couple’s relationship … are Kardashian and Thompson over for good? (It looks like there might be some Khloé Kardashian and Tristan Thompson breakup clues out there, as first found by Cosmopolitan. And the biggest clue so far? Thompson’s Instagram. (Isn’t social media fun?) 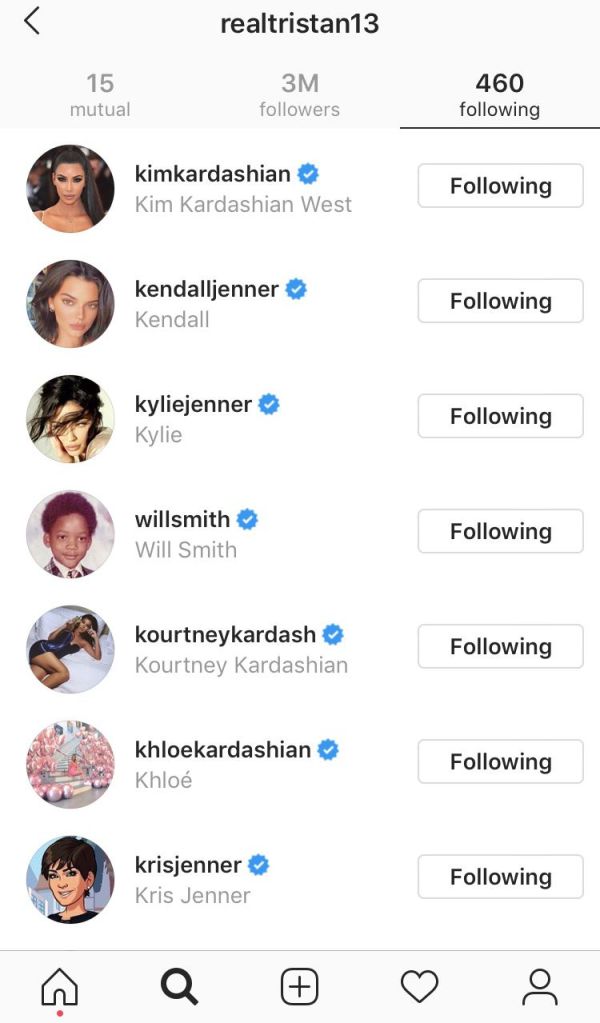 Next—the likes. Who hasn’t searched their Instagram likes to make sure the one you hope has seen your photo is on the like list? In this day and age, stalking is kind of the norm, wouldn’t you say? (Although there are ways in which people take it too far. We’re looking at YOU, Joe Golberg.)

Thompson doesn’t have a consistent way in which he likes his girlfriend’s photos—he doesn’t double tap every time—so it’s hard to say what it means that he hasn’t liked most of her recent posts. But don’t lose hope yet! His name does appear in the likes on her photo from just three days ago, and we think that is a great sign:

And that seemed like a great sign. We can’t envision a scenario where Kris Jenner would like the man’s photo who broke her daughter’s heart, can you? However, on further inspection it looks like their names aren’t listed in the likes of that photo. Did they unlike? Or was it never there to begin with … might be cause for a bit of concern, but we’re not convinced it means breakup.

Kardashian and Thompson have gone through a pretty tumultuous time since a video of Thompson reportedly cheating on the then–pregnant Kardashian (with his baby) surfaced last year.

But it seems like the couple is working through it and focusing on their daughter, True. A source close to the couple told Us Weekly, “Khloé and Tristan are really focused on doing what’s best for True. They are not going to get engaged anytime soon. The focus right now is on whatever’s best for True.” That’s so sweet!  Kardashian has even gone as far to say that motherhood empowers her to “do anything.”

“My favorite part about being a mom, I mean it’s so corny, but it’s like, no matter how tired you are, it’s complete bliss, no matter what,” Kardashian told Entertainment Tonight’s’s Keltie Knight while promoting her and Haqq’s BFF beauty line with BECCA Cosmetics. “I mean, Christmas Day, I was so hungover and I was like, ‘How am I gonna get through this day?’ And just when you see your baby, and how happy [she is], you just get through it. I was like, ‘OK, I feel like I can do anything. I could do this.'”

Kardashian is happy. Thompson seems happy. He even instagrammed a family photo on Thanksgiving 2018.

Here’s hoping the couple stays in a good place, and if Instagram is any indicator, we think they are still together, even if they don’t have Valentine’s Day plans.