We can’t help but wonder WTF is in the water in Kardashian-land, considering that Khloé Kardashian is pregnant, Kylie Jenner is pregnant, and Kim Kardashian West is kind of pregnant (at least, she’s expecting via surrogate). This is a level-five “we can’t” situation, and we’re having trouble collecting ourselves and moving on with our lives.

And the thing is, we all missed the biggest clue ever that Kardashian was pregnant—back in June. That silence you just heard is the sound of us hanging our heads in shame. Why didn’t we figure it out? Kardashian posted a flurry of Polaroid photos on her Instagram story feed in June, celebrating her birthday with boyfriend and NBA star Tristan Thompson. The photos were so cute that we totally missed a very peculiar caption: “Dad + Mom.”

To be fair, we heard rumors that “Dad” and “Mom” are just weird nicknames the couple likes to use. And Kardashian did inquire with her Twitter followers about a cure for her hangover after the party—but that could have been a ruse. It’s all very confusing. So maybe we can be forgiven for not having already used our celebrity sleuthing powers to figure this one out. 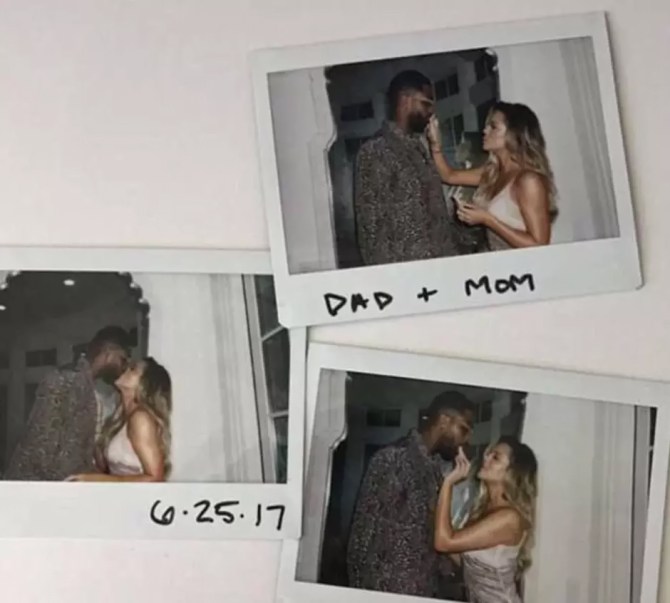 More: Kourtney Kardashian’s Replacement for Shampoo Is a Cooking Ingredient

In April, Kardashian talked to ES Magazine about getting hitched to Thompson. She was enthusiastic about the idea, saying, “I would love to have a family. We’ve talked about it. He [already] is a father, and I know for a fact that he would be an impeccable father. I definitely want to be a mom. But I don’t put the pressure on it. It’s not like, ‘The clock is ticking.’ I feel in my soul it will happen.” Well, it happened.

Well, at least it seems like it did. Kardashian posted a very toned belly shot to Instagram just four days ago, and commenters are losing their minds in confusion. One wrote, “She’s not pregnant she wouldn’t ruin that body she worked too hard.” We’re pretty sure nothing can “ruin” hard work, for the record.

We’ve got to hand it to all the Kardashian “sources” who have been working overtime leaking info to the media. Kardashian’s big news came by way of People, which reported a source had this to say: “Khloé and Tristan are expecting and they are absolutely thrilled. This isn’t something they were in a rush to announce to the whole world, and it’s only been in just the past week or so that they’ve felt comfortable telling most of their inner circle.”

We’re now all officially part of the inner circle, we’re assuming, and expect invites to the trio of christenings. Now, if you’ve lost track of all the contoured Kardashian-Jenner sisters and their offspring, this is Kardashian’s first child. Thompson, on the other hand, knows his way around a burp cloth. He has a son, Prince Oliver, with his ex Jordan Craig. Prince Oliver was born in December 2016, so that means Thompson will be one busy daddy with an infant and a toddler on his hands.

MORE: Why Kim Kardashian and Kanye West Don’t Give Their Kids Presents

Are you still squinting at the screen trying to keep count so you can explain this hotbed of family fertility to your mother? Us too. On Friday, People dropped the bombshell that—according to those sources again—Kylie Jenner has a baby girl on the way with beau Travis Scott. Yes, another dude with a T name, because the Kardashians (and Kanye West) took all the K’s. Jenner’s debut baby is set to drop in February. And if you’re marking your calendar, Kardashian and Jenner are reportedly due around the same time. “Shut up,” you say. “Why, it’s almost like they planned this baby coup for ratings,” you say.

“Kylie is over the moon about her pregnancy. Khloé and Kylie are both due around the same time. They are approximately four months along… Kylie loves how close-knit her family is and is thrilled to bring that to her own family. She feels more prepared than ever, especially since she will be sharing this journey with Khloé,” said an insider to People. “They are looking at it like a unifying experience for them as sisters.”

Why the Kardashian-Thompson announcement on the heels of Jenner’s? Another source told People, “Things were complicated a bit by Kylie’s announcement as they don’t want to be seen as intruding on that moment for her but it is now reaching a point where Khloé doesn’t want to be openly lying to people, and just staying quiet isn’t going to work anymore.”

And don’t forget poor Kardashian West and Kanye West. They are waiting impatiently for their third child, a girl, who is supposedly arriving in January 2018 via a surrogate.

So there you have it. We may have three new heirs to the Kardashian empire in the span of a month at the top of 2018. It’s either the craziest reality TV coincidence ever or the work of some mad (and very fertile) geniuses.