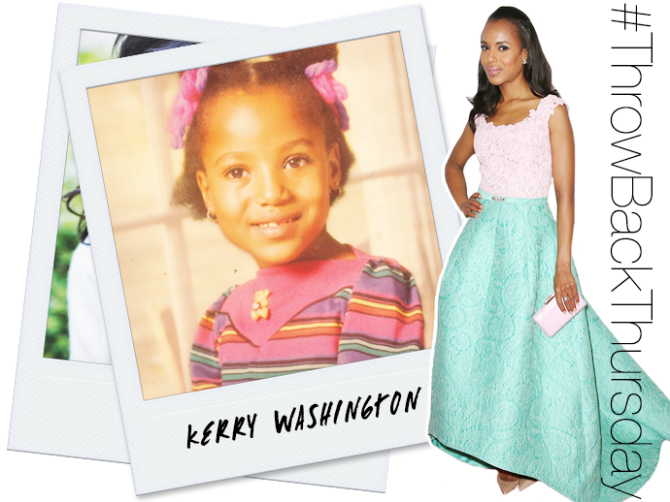 These days, Kerry Washington is the toast of Hollywood. The 36-year-old beauty has had a successful film career for years, but recently catapulted herself to the next level of stardom thanks to her leading role on ABC’s smash hit show “Scandal.” As Olivia Pope, Washington deals with the trials and tribulations of being a crisis manager for the White House—and dealing with personal crises of her own, like having an affair with the president.

The role has earned her an Emmy nomination, and we can’t wait to see if she takes it home this Sunday. (Naturally, we also can’t wait to see what she wears.) Washington has become a serious style setter over the past few years, and she was even recently named the world’s best dressed woman by People.

More #TBT: See Anna Wintour Back in the Day—With a Different Haircut!

It wasn’t always glitz and glamour for the New York native—but she was always on the path to success. Born in the Bronx, Washington was an active member of the Boys & Girls Club of America, and was even in the same group as Jennifer Lopez. She was actively involved in theater from a young age, and carried that passion with her to Manhattan’s prestigious Spence School and The George Washington University. To this day, she’s still interested in the stage, making her Broadway debut in 2010’s provocative play Race.

Before the red carpet, there were adorable striped shirts—and we couldn’t resist sharing the above #TBT of one of our favorite starlets!

What do you think of this week’s #ThrowbackThursday? Let us know who you want to see next week!