Kendall Jenner is no stranger to “Best Dressed” lists, but her latest fashion choice is drawing attention for the wrong reasons. The 22-year-old model is being slammed by animal activists for wearing a fur coat at a runway show by Dsquared2 at Milan Fashion Week on Monday.

The outfit featured Jenner dressed in an oversized fur-looking coat over a ruffled patterned maxi dress. The “Keeping Up with the Kardashians” star also shared a few backstage selfies with the coat on Instagram with the caption, “this coat! backstage @dsquared2.” Since the backlash, Jenner has disabled comments on the Instagram of her wearing the coat. 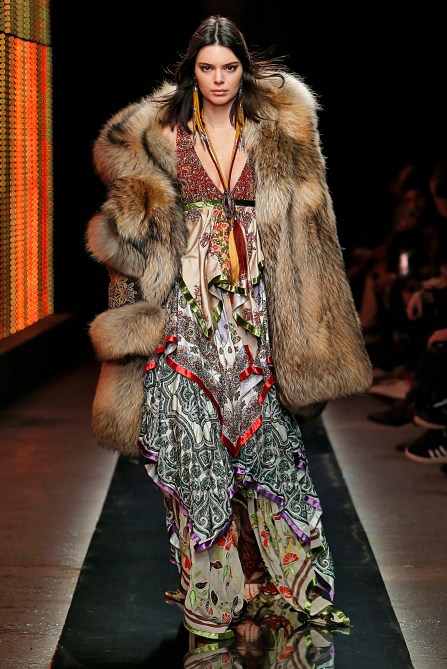 MORE: Kendall Jenner Fires Back at Critics Who Shamed Her for Walking a Red Carpet with Acne

While it’s unclear whether the coat is made out of real animal’s fur, animal activists accused Jenner of promoting the fur industry and animal abuse by modeling a fur coat. Though a huge responsibility lies on Dsquared2 for manufacturing the coat, critics are arguing that Jenner is complicit for promoting the coat, despite knowing about its material.

MORE: The Internet Is Slamming Khloé Kardashian for Smoking While Pregnant

Other than disabling her Instagram comments, Jenner hasn’t responded to the criticism. After the backlash over her silence following her controversial Pepsi commercial last year, we hope Jenner takes the criticism to heart and issues a response.