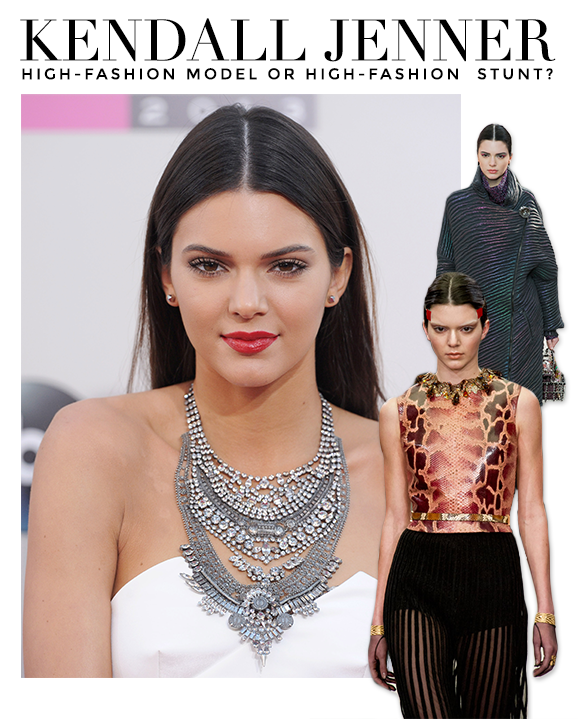 Now that she’s officially walked the runway at the Chanel show at Paris Fashion Week, it’s safe to say that Kendall Jenner is a bonafide fashion star. From appearances at Marc Jacobs and Givenchy to a dedicated series on Vogue.com, the gal has been an absolute sensation throughout this Fashion Month.

Needless to say, the reaction of the fashion media and the public at large has been decidedly mixed. Some seem happy for the 18-year-old member of the Kardashian clan, while others think she’s undeserving of her fashion fame. As it happens, the debate over Kendall Jenner has been raging inside our own office, and now that her fashion career has reached an apparent zenith—walking in the Chanel show is no joke!—we decided to take sides.

Pro: Kendall Jenner is the Real Deal, by Samantha Lim

“Keeping Up With the Kardashians” has ended up being a double-edged sword for Kendall Jenner. The reality show family is constantly pegged with the title of “being famous for doing nothing,” and the ladies seem to magically manifest careers of their choosing at any given moment. This does not mean, however, that we should all assume the worst of Kendall as she pursues a career as a high-fashion model.

She’s had some big, strategic fashion coups this season (thanks to her top-tier modeling agency, by the way.) Each time, she fit in seamlessly, unlike most celebrity models who are usually framed to stand out.  Not to mention, she was seated front row next to powerhouse Anna Wintour at a London Fashion Week show, which surely means the fashion world is taking her seriously.

It’s unfair to assume that—because she got her break by having a well-connected family—she doesn’t deserve to be there. Kendall has been given an incredible chance, and if she’s passionate about becoming a model, and if she’s willing to work for it, then she deserves a shot.

This isn’t the first time a young, beautiful girl has launched her modeling career from having a famous family. Cara Delevingne, one of the most sought after models of the year, comes from one of the most well-connected society families in the U.K.  Likewise, Georgia May Jagger has a thriving modeling career with plenty of big name endorsements, which is a result of her family and beautiful looks.

On the younger end of the spectrum (and probably the most relatable to Kendall) sits model Gigi Hadid, whose familial ties can be seen on “The Real Housewives of Beverly Hills” and who’s recently been dubbed “the next Kate Upton.” None of these girls were discovered in a shopping mall, and none of them seem to be getting the eye-rolls and disregard from fashion as much as Kendall.

I don’t think it’s just for publicity’s sake that Kendall’s gotten the official wave of approval from fashion’s fairy godfathers —Chanel’s Karl Lagerfeld took superstars Lindsey Wixon and Delevingne under his wing when they were teenagers, and Givenchy’s Ricardo Tisci helped launch the careers of Lara Stone and Joan Smalls. It’s unfortunate that the reputation of her family is calling into question her own ability to develop a career in an industry she’s clearly capable of infiltrating.

I accept that Kendall Jenner has the core makings of a model: She’s 5-foot-10, skinny as a rail, and has the kind of big-eyes-and-doll-like-lips face combination that people like to look at.

But here’s the thing: So do hundreds of other wannabe models that never make it. There’s one reason that Kendall Jenner has been such a runway sensation this season, and one reason only: She’s affiliated with the Kardashians.

I’ll pause for a moment here and say that I have watched “Keeping Up with The Kardashians,” though I’m by no means a regular viewer nor am I a fan of the show. I do have a lot of experience, however, with the amount of web traffic, opinion, and (in some cases) vitriol the Kardashians can generate online, and I also know that the clan’s ability to drive eyeballs around everything with which they’re affiliated can and does influence both brands and media to continue covering and partnering with them.

In many ways, Kendall Jenner is the fashion world’s safest way of harnessing some of the power of the Kardashian brand without actually having to feature Kim, Khloe, or Kourtney.

I’m not saying Kendall Jenner wouldn’t make a fine model—she certainly passes muster in all the relevant categories. It’s that she’s in no way an exceptional model, which is the watermark I think you should have to meet if you’re going to walk in several high-fashion shows and be featured prominently on something like Vogue.com for an entire season.

Frankly, that amount of attention is almost absurd for someone who doesn’t have the double-take-inducing look of, say, Cara Delevigne, who also comes from a prominent family. Kendall Jenner may have a future in modeling, but I’d argue that her looks make better suited for more commercial work.

The fashion world is fickle, and loves a good stunt. (See: Givenchy’s Riccardo Tisci taking Kim Kardashian under his wing and calling her the “Marilyn Monroe of our age.”) Kendall Jenner does not seem unique enough—speaking entirely about her looks, not about her as a person—to keep hold the fashion world’s interest for long.