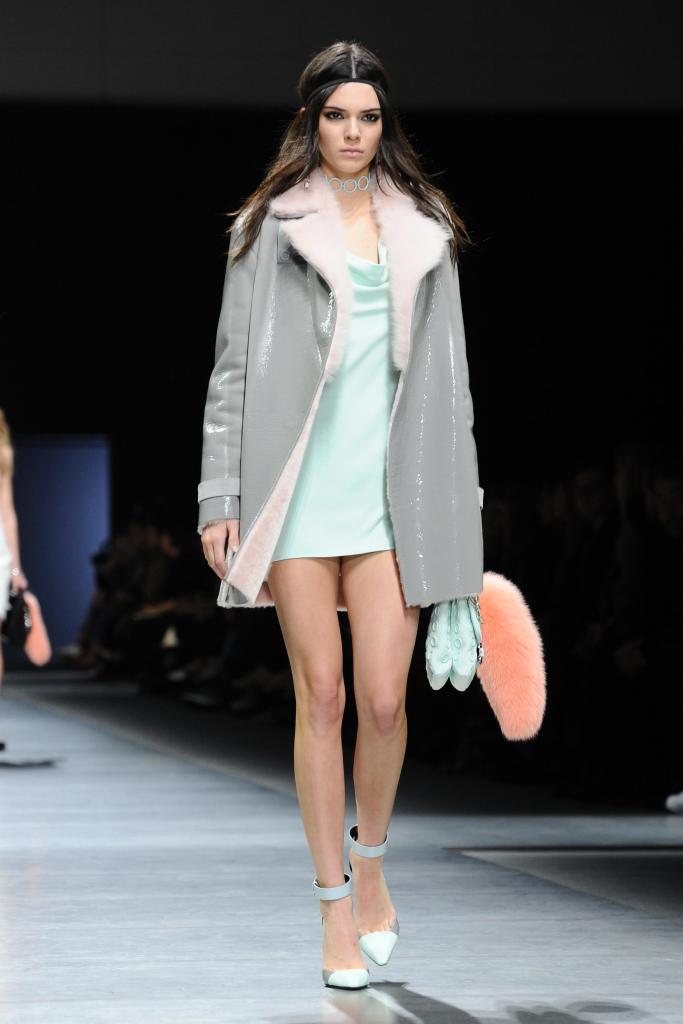 Growing up, Kendall Jenner says, her father was famous for putting his foot down and her mother was easy to manipulate. “My mom was the pushover, and my dad was the strict one,” she says in a weird little moderated interview published today in Harper’s Bazaar, which basically sat her and Karl Lagerfeld down and had them meander all over the map, comparing notes on things like childhood and how to trust people in their spangly worlds. As anyone who has ever watched “Keeping Up with the Kardashians” knows, this is an understatement—Kris Jenner is notorious for having a hard time saying no, and Caitlyn Jenner is generally much more liable to draw a line in the sand.

Not so for Lagerfeld, though: “My father … could never say no, so I got everything I wanted. I had a Bentley when I was 20,” he revealed. That explains a lot. “As a kid, I was overspoiled, with a head like this,” Lagerfeld said, with a hand signal that the magazine denotes as a wide gesture. “My mother would say to me, ‘You look okay but not as good as me.'” Sounds like something Kris Jenner would say! “I could speak three languages when I was six [English, French, and German], and when I went to school I only liked to read and sketch. At five, I could write and everything.” So—it’s safe to say that the similarities between his childhood and Kendall’s ended right around the point of having a Bentley-type vehicle at the age of 20.

The two also bonded over the importance of nighttime rituals and going to bed looking chic. “I don’t take showers at night because I take a bath when I wake up,” Lagerfeld said. “Then I go to bed on the most beautiful Egyptian-cotton antique sheets in the world.” A little different for Kendall, but basically same: “I take a shower—I live for a shower. Then I get into comfortable clothes and go to bed.” But then Lagerfeld took it to the next level: “You have to be impeccable—I was always told as a child by my mother that you always have to be impeccable, even when you go to bed,” he said. Never one to be one-upped, Kendall added, “You know what they say, dress your best when you go to bed because you don’t know who you’ll see in your dreams.” Dress your best … in comfortable clothes. Got it, Ken!

As it turns out, Kendall is a serious fan of all things “comfortable”: “Most days I don’t care what I wear,” she said. “You’ll find me in yoga pants, a T-shirt, and sneakers almost every day. My job is to wear something nice when I work, so I enjoy doing it then. But when I don’t have to, I’d rather just wear something comfortable.”

She went on to say that she misses traffic when she’s not in Los Angeles for some reason (“I love being stuck in L.A. traffic. I miss it!”), and outed herself and Kanye West as total Beliebers: “I went to Justin Bieber’s concert the other night.… Of course I have the fever! He’s a really good friend of the family’s, so we all went to support him. Kanye went two nights in a row. He’s a huge fan—I was shocked. He was dancing around the whole night, having so much fun.”

Lagerfeld had nothing to say about the yoga pants of which she speaks (Chanel doesn’t make those) or about the Biebs (not really Lagerfeld’s speed either). But he was quick to let Kendall know that the “vet video games” she said that she played as an animal-loving kid were not for him: “In my day, there were no vet video games,” he avowed. Yeah, Karl, we know: There were no video games of any kind in the 1930s and ’40s. But thanks for the reminder!