Just when we thought that Kendall Jenner’s naked dress from London’s Fashion Awards was the most exciting Kendall Jenner news to come from last night, the 23-year-old surprised us with a secret love letter that may or may not be from Harry Styles.

The letter, posted on the model’s Instagram story, featured a romantic note from an unknown suitor about love, distance and how the two are “united into one forever.” “Dear Kendall, We may be miles apart but my love for you grows stronger & stronger by the minute. My innermost feeling is love for you. I will love you until death separates us. Right now this separation is killing me, but in my heart I know that nothing could come close to separating us. We are united into one forever, body & soul and I want you to know that I love you from the deepest part of my heart,” the note read.

MORE: The Most Devastating Celebrity Breakups of 2018 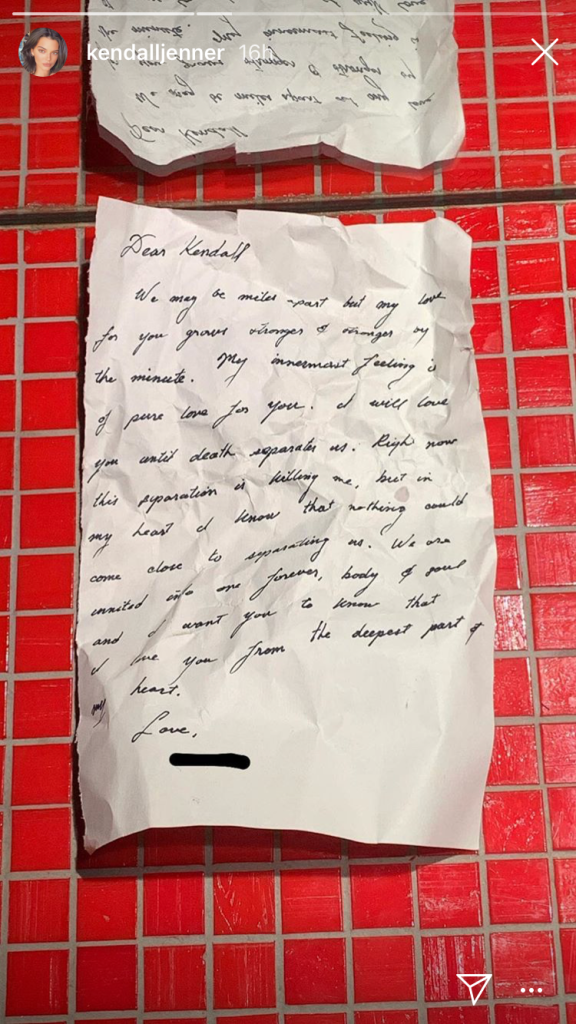 As detailed and Shakespearean as the note is about Jenner and her anonymous suitor’s relationship, the name of the person who sent it is unknown. The model blacked out the suitor’s name at the end. Still, that isn’t stopping fans from who the love-letter-sender could be. The most popular theory? Harry Styles.

You see, back in 2015, there were rumors that Jenner and Styles were dating after they were seen vacationing in Anguilla together. Given their history, Styles was the first person fans went to to compare his handwriting to that of the love-letter-sender. And as much as we would love for them to be right (and as close as the cursive is to each other), it looks like the handwriting doesn’t match, so we have to eliminate Styles from the equation. Still, that isn’t stopping fans from having hope that Hendall is alive and well.

MORE: 28 Times Kendall Jenner Was the Master of #TallGirlProblems

So who was it from then and where do we get a Noah-and-Allie-from-The–Notebook romance like this?