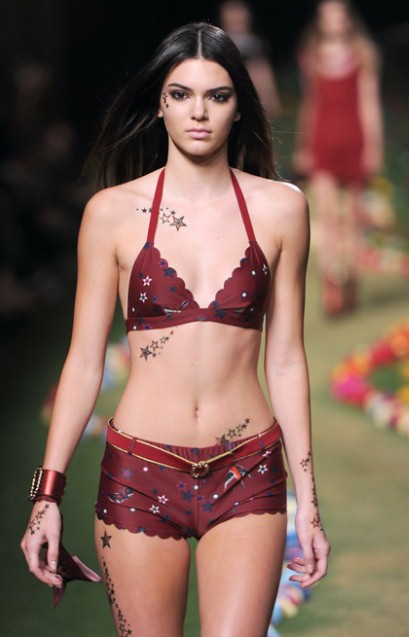 We know she’s killing it on the catwalk, but—according to a new report—Kendall Jenner have scored her most high-profile modeling gig yet: As a Victoria’s Secret Angel.

MORE: Is Kendall an Amazing Model or an Overrated Fashion Stunt?

“[Victoria’s Secret] saw all the buzz she got from walking in New York Fashion Week,” a source told In Touch. “They’d love to lock in a contract with her.”

We can hardly blame the skivvies brand for looking to the 18-year-old reality star turned fashion darling—every show she appeared in during Fashion Month got headlines aplenty, thanks to her affiliation with the country’s most famous family (it pains us to write that, but it’s probably true.)

As a general rule, Victoria’s Secret gets a hefty amount of press anyway for its yearly runway spectacle thanks to half-naked models, big musical stars, and a high-profile front-row, but we have a feeling that having the Jenner-Kardashian clan attached would generate even more press.

Kendall’s modeling career has skyrocked—she only kicked it off in earnest last February, when she made her catwalk debut for Marc Jacobs during New York Fashion Week. Since then she’s walked for Chanel, Balmain, Tommy Hilfiger, Givenchy, and appeared in high-end campaigns and in Vogue.

And—it should be noted—Kendall made headlines this summer when she appeared naked in photographer Russell James‘ book of photos, titled “Angels.” James has been the official Victoria’s Secret photographer since 1997, so obviously adding Kendall to the mix caused some buzz that she’d be strapping on a pair of wings and following in the footsteps of famous beauties like Adriana Lima, Gisele Buncdchen, Heidi Klum, Alessandra Ambrosio, and Karlie Kloss.