When Kelly Mi Li read Kevin Kwan’s book Crazy Rich Asians seven years ago, she had one thought. “I was like, ‘Oh my God. These are all fictional versions of my friends,’” Li tells StyleCaster.

The thought led her to the idea for Bling Empire, Netflix’s new reality TV show about a real circle of Crazy Rich Asians in Los Angeles. Li, who was the first one cast, took the idea to TV producer Jeff Jenkins (The Simple Life, Keeping Up With the Kardashians), who sold the series to Netflix.

“Reality TV allows us to share our lives and culture with the world, the ups and downs and all the in-betweens,” says Li. “The show is pecial to me because hopefully we can give a voice to the underrepresented Asian community in the mass media. Now, with Crazy Rich Asians, we have a movie on the big screen, we have TV series special to the Asian community, but we don’t have a reality show yet. Hopefully this can add another layer and genre for the audience.”

Li is one of eight cast members in Bling Empire, which also includes Kevin Kreider, Christine Chiu, Anna Shay, Kane Lim, Kim Lee, Cherie Chan and Jamie Xie. “The rest of the cast were friends of mine that I brought in,” Li says. “I think that’s why this show is so special and unique. A lot of times with reality shows, some of the cast don’t know each other. All of the cast I’ve been friends with before.”

Ahead, Li talked to StyleCaster about how Bling Empire helped her relationship with her boyfriend, Andrew Gray, why they got back together after the show and what viewers can expect for season 2. 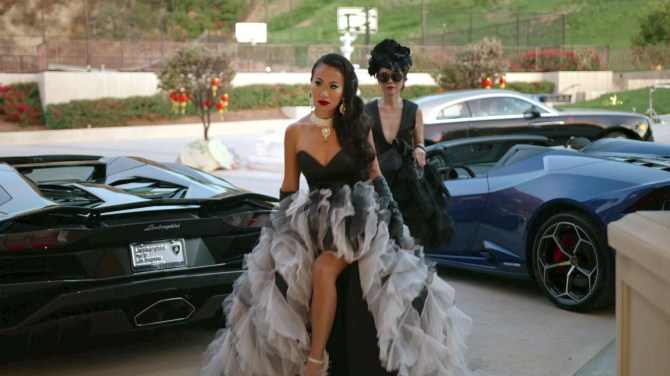 “It definitely took some persuasion because with the Asian culture, we tend to be more quiet and more reserved, especially also because most of our cast members are from generational wealth. They’re family money. You know how Asian families are. They don’t want you to go out there. They want you to preserve the image. I’m really happy that everyone trusted the process and was able to enjoy it.

Kane [needed the most convincing]. It was more of his family. I know both of his parents. Kane was the second person that was cast on the show. He’s one of my closest friends. His family pretty much controls the oil enterprise in Asia. Talking to his parents and having his parents OK it and give their blessing to do the show was probably the most challenging one because he was the first person to sign on after me. The rest of them, it was a lot easier afterward.”

On how true Crazy Rich Asians actually is

“There are a lot of similarities, but obviously, it’s different as well. The similarity is that it is that crazy, it is that absurd. The money and the parties are real. We do these giant, extravagant parties with or without a camera. How is it different? Asian culture is so diverse, so we only showcase a part of the Asian culture. We try to cover as much as we can in season 1. Same thing with the movie Crazy Rich Asians. You’re only covering a circle of friends that are normally in that circle. You’re not covering the whole Asian culture and community.”

On how Bling Empire helped her relationship with Andrew

“Andrew and I met through a mutual friend at a birthday party about six years ago. Like anything, you’re scared of judgement, you’re scared of people seeing your weakness, you’re scared of people seeing what really goes on in your relationship. But at the same time, we’re really happy we did it because Andrew and I grew so much from this show. This show made us really deal with our problems head on instead of just slipping it under the rug.  We discovered more about ourselves at the end of the day and were able to grow from the experience. In general, it was very positive, but at the time, it was difficult.” 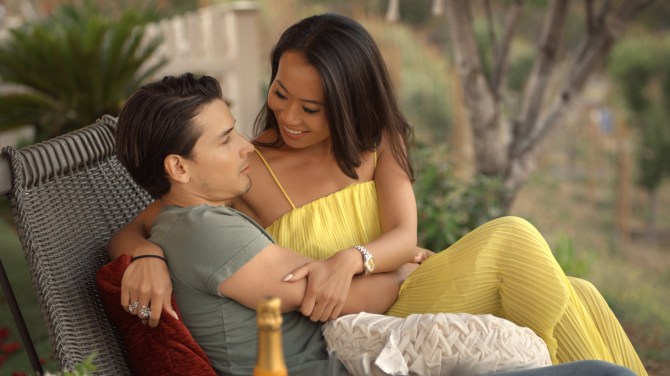 On what her relationship with Andrew is like now

“We’re still together. I’d say we’re better than we have ever been in our relationship. After the show stopped, we took about a six-month break, where we did our own therapy, which we’re still doing right now. We’re still living separately. We’re going to keep working on our relationship and keep growing from it.”

On why she got back together with Andrew

“The thing with Andrew is he has a very good heart. His heart is very pure. There are no bad intentions with him. I think it’s very rare and it’s very hard to find people with pure intentions. It doesn’t matter if you have money or don’t have money, Andrew treats everybody kind of the same. That’s the beautiful thing about him. Of course, he gets hard-headed sometimes, he gets hot tempered. But he always apologizes. He’s very different than any guy I’ve ever dated before, but he also challenged me to grow more. We’re polar opposites. He opened my eyes to a new world that I’d never seen. He opened up feelings for me that have never existed before. He’s taught me a lot of things. One of the things I credit him for is being able to be more open and be more vulnerable. Something like crying. My parents used to always teach me, ‘Don’t ever cry in public.’ Even crying in private sometimes, it’s embarrassing and shows weakness. I remember when me and Andrew started dating, he was like, ‘It’s OK to cry. That’s a normal human emotion.’ It was a simple concept, but it was a light bulb because no one had ever told me that. I was like, ‘Oh wait, it is OK to cry. Why do I have to hide it?’”

On why she went on a date with Kevin

“Kevin and I have always been friends. I’ve never really thought of him that way just because he’s a friend. When me and Andrew broke up that time, I was like, ‘This is it. We’re not getting back together. I’m putting my foot down. This time around, he’s out. We’re done.’ I think going on a date and giving this new thing a chance was just to see. What better person to go on my first date in five years with than someone I’ve known for a while and someone I’ve been friends with? Of course, when we went on the date, I was like, ‘OK. Yup. There’s no chemistry there. I think of him as a brother.’ We’re still very close. We talk at least once or twice a week. We’re friends now.” 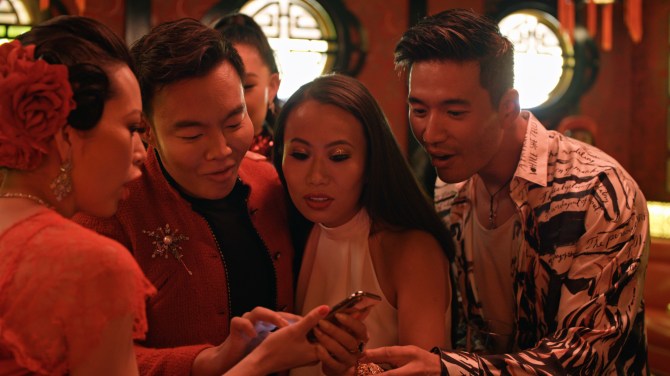 On the possibility of season 2

“All of us are down for season 2. We have our fingers crossed this show will do well and then Netflix will greenlight season 2 because there was so much more we want to cover in season 1 but we had limited time and limited episodes. We really hope there will be a season 2 and for us to show more to the audience and show more of our lives.”

On what fans can expect in season 2

“One of the things we played around with that I want to do is going to Singapore to see where Kane grew up. Also I had a house in Singapore for two years, so that was my home for two years. We want basically to explore our family lives and where we came from. One of the things we all have in common is we all give back and do a lot of nonprofit work. That’s actually how Christine and I met. We sit on the board for UNICEF Chinese Children Initiative. Being able to see the causes that we’re passionate about and the causes we give our time and resources to.”

Bling Empire is available to stream on Netflix.